Yves here. Based on the change in the value of sterling this year and since the Brexit vote, it’s clear that Brexit means a weak sterling. No one is quite sure how low it might go, but some forecast that it might fall as low as 1.05 to the dollar.

As most readers know a depreciation of a currency is not always a bad thing. In normal circumstances cheaper currency will make imports more expensive and lead to lower standards of living but it will also make exports cheaper and this will normally lead to more job creation. That’s the theory anyway. If it works out this way a depreciation might help rebalance a current account deficit. The UK could sure do with some rebalancing. It’s current account deficit is now a whopping 5.2% of GDP, the highest it has ever been since the statistics came online.

I’m posting this article that Philip Pilkington wrote in 2014 because it highlights some interesting things about the UK current account and the sterling. Pilkington argues that the sterling is only propped up by financial inflows into the City of London and that any threat to these financial flows can easily result in a sterling crash (he made a similar argument in this Guardian article which came out around the same time). He argues that the UK is not like the US which, because of its reserve currency-issuing status, can run very large current account deficits with little or no consequences for the dollar. The sterling crash after the Brexit confirms his argument: all it took was a big scare.

But this is where the problems come in. As Pilkington shows, last time the sterling took a big hit in 2007-08 export prices didn’t fall and make the UK more competitive, they rose and made the UK less competitive! The reason? Global supply chains. The inputs that UK companies use to make exports are themselves imported. When the sterling falls, the inputs rise in price so the firms have to raise the prices on their export goods. As Pilkington points out this means that all the adjustment must take place on the side of real incomes: that is, peoples’ living standards must fall through rising prices.

By Philip Pilkington. Originally published at Fixing the Economists

Something rather strange happened in Britain around the time of the financial crisis. The sterling tanked, import prices rose substantially and yet the inflation rate didn’t respond as much as we might assume.

Other weird stuff happened too. For example, export prices rose rather than fell and the trade deficit worsened. Although these two aspects seem to totally contradict macroeconomic theory I’m not as concerned about them. In our newly globalised world exports, outside of small open economies, don’t increase as much as economists might assume. I’ve known this since I started examining the data — and Nicholas Kaldor was well aware of this by the late-1970s and early-1980s too. The fact is that in modern developed economies price elasticities don’t matter nearly so much as they did in the past. I have some ideas as to why this is but I won’t get into it here.

I have never, however, come across an instance where a substantial depreciation of the currency has not resulted in substantial price increases in an import-dependent economy like Britain. Indeed, the Office of National Statistics thought that these trends were pretty weird too and so they published an excellent report entitled Explanation beyond exchange rates: trends in UK trade since 2007 which I will draw on for many of the graphs in what follows.

Okay, first of all let’s take a look at the exchange rate versus the trade balance. The period that we are interested in is between 2007 and 2008.

As we can see, there was a massive depreciation around 2007-2008 and the trade deficit stayed open. At the same time import prices went up by a fairly large amount as can be seen in the graph below. Export prices rose too, as we can see — which, of course, is not in line with economic theory. 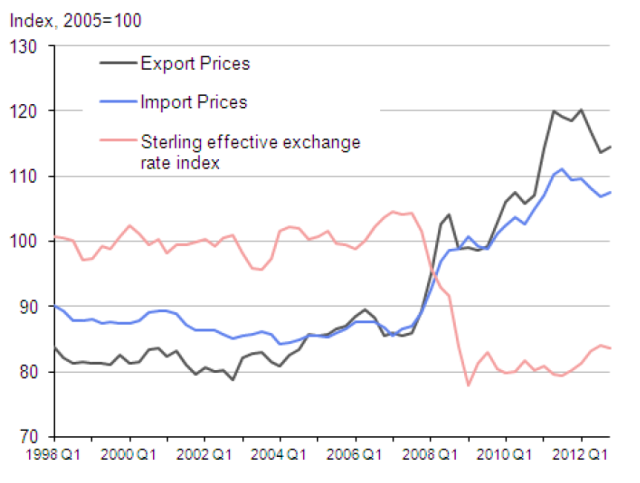 So, what is the explanation for all this? Well, I think it runs something like this.

First of all, companies that import goods to use in order produce goods that they export passed on the cost to foreign buyers. As we saw above and in contrast with macroeconomic theory, export prices rose after the depreciation by more than import prices. I think that we are seeing the pass-through effect in the data quite clearly.

Secondly, and most important from my point of view: companies selling on the domestic market used the sharp fall in wages in this period to absorb the higher costs so that they didn’t have to raise prices and could thus maintain market share. Take a look at the following graph plotting earnings against inflation in this period.

At the same time as firms saw their import prices increase they saw their wage bills fall dramatically. So, they didn’t have to increase prices too much because they just passed through the savings they were making on wage costs. Ultimately workers saw their standards of living fall dramatically but rather than see this manifest as maybe 8-10% price inflation, they saw instead 4-5% inflation and negative real wage growth which went from an average of about +2% to -2% — a decline of about 4%. The net effect on living standards was probably about the same, it just shows up in different data aggregates.

What is the key lesson from this? Well, it seems that the UK didn’t experience substantial price inflation in 2007-2008 after the depreciation of the sterling because of the unemployment and rock-bottom wage growth that occurred at the same time. The effects on actual living standards were probably largely the same as if there had been substantial inflation but you have to look for it in different data.

If a substantial depreciation of the sterling ever took place in a period when there was tight labour markets and healthy wage growth we would likely see a large uptick in inflation. We would also see feedback effects in that the trade deficit would rise as price rises were passed through to foreign buyers which would then put further pressure on the currency. The whole thing could get very ugly very quickly. And that’s not even to raise the specter of a wage-price spiral in a time of low unemployment.

This brings us to our final question: why was there a large depreciation of the sterling in this period? Well, because the value of the sterling is tied up with the price and turnover of financial assets in the City of London. The UK is not in a position like the US which has the world’s reserve currency  and so when asset prices took at massive hit in 2007-2008 the sterling did too. This shows just how sensitive the sterling is to any chaos that might occur in the financial markets. It also shows just how sensitive the currency would be if a government ever moved to shut down the City.

The UK economy after Thatcher is hooked on finance. And it would take quite a bit of policy ingenuity to ween it off its drug of choice.