Readers, today I am weeding the last wilderness area of the property, preparatory to sheet mulching it. When I’m done, my garden will longer be a disgrace in the eyes of the town. Then — sorry, vegetarians! — I’m going to put the burgers on the grill and break out some cheap red wine. So this holiday Water Cooler will be short. Talk amongst yourselves!

Although since this story appeared today, July 4:

“Huma Abedin admits that Clinton burned daily schedules” [Daily Post] (and already propagated to The Hill and the Daily Mail, as well as the usual suspects from The Mighty Wurlitzer). Is there a there here?

“If there was a schedule that was created that was her Secretary of State daily schedule, and a copy of that was then put in the burn bag, that . . . that certainly happened on . . . on more than one occasion,” [multi-hatted Huma] Abedin told lawyers representing Judicial Watch, the conservative organization behind the emails lawsuit.

Abedin made the surprising admission in response to a question about document destruction at the Department of State. A lawyer for Judicial Watch asked: “And during your tenure at the State Department, were you aware of your obligation not to delete federal records or destroy federal records?”

Abedin was not pressed for more details.

Clinton has admitted to destroying “private personal emails” as secretary of state. But Abedin’s admission that she used so-called “burn bags” — a container that material is placed in before it is destroyed — for some of her schedules is the first time anyone close to her has disclosed destroying public records.

A former State Department official told The Post it was unprecedented for a diplomat to destroy a schedule like this.

“I spent eight years at the State Department and watched as four US ambassadors and two secretaries of state shared their daily schedules with a variety of State Department employees and US officials,” said Richard Grenell, former diplomat and US spokesman at the United Nations.

“I’ve never seen anyone put their schedule in the burn bag — because every one of them had a state.gov email address and therefore their daily schedules became public records, as required by law.”

Others said Clinton’s careful approach to her schedule further highlights her recklessness in using a personal server for all her email communications.

“The [president’s] schedule was not classified but it was deemed ‘highly sensitive.’ Instructions were given at the White House and on the road that schedules would be disposed of through the use of ‘burn bags’ and/or shredding,” said Brad Blakeman, a scheduler for President George W. Bush.

“This shows, in my opinion, a skewed sense of security. The Clinton people would dispose of the secretary’s schedule in the same manner as if it were classified yet those same safeguards were not in place with regard to email communications.”

Despite Grenell, I’d want to know for certain that copies of Clinton’s daily schedules were public records within the meaning of the act. The story also says “a copy” went in the burn bag. Were there others, not burned? And despite Blakeman’s spin, Obama got to destroy his, so why not Clinton hers? (To which the answer might me that a different body of law applies to the President; exactly as with her demand to have a secure Blackberry just like Obama’s, Clinton would be assuming Presidential prerogatives that she does not, as yet, have.)

No doubt this story will develop throughout the day. To me, it looks like Clinton is systemically destroying evidence of any nexus between her public role and her private dealings, including the Clinton Foundation and Bill’s front-running for contributions with speeches, if that is what he was doing; exactly as she did when she privatized her email server and then threw away half the mail on it, claiming it was personal. Presumably, however, the schedules that went in the burn bag didn’t, this time, include her yoga lessons and Chelsea’s wedding? 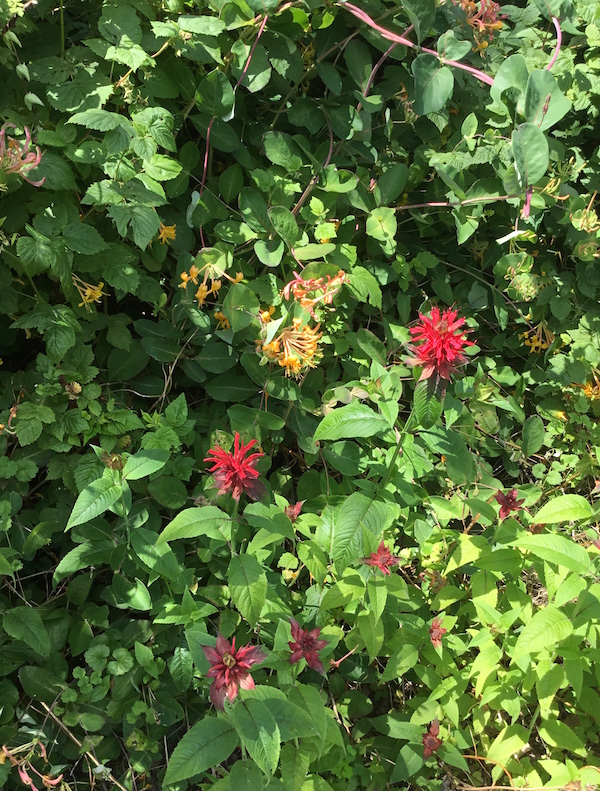 This is not a very good photograph, but it does illustrate the principle that there’s nothing wrong with one invasive plant that another invasive plant can’t fix! Here we have three, duking it out: Honeysuckle, raspberries, and bee balm.

The bee balm just flowered yesterday, and hummingbirds love the red flowers, so I’m anxiously waiting for them to appear. I’ve also been taught (by NippersDad, I believe) that “Birds love a mess,” and there’s certainly a mess for them here: Birds use straw for the sheet mulch for their nests, they hide in the bushes (and they also like to perch on the bamboo tomato hoops (not shown)).

The whole ginormous tangled mass of greenery also protects me from eyes on the street while I sit outside working on my laptop, and the pedestrians like to sneak the raspberries (so they think; I enjoy it when they do).

As an illustration of the important principle of stacking functions, this explanation is as tangled as the greenery; but you see what I mean.

Adding, thank you once more readers for last month’s rapid and successful Water Cooler Mini-Fundraiser. Checks are arriving in the mail. I’m almost finished writing thank you notes! Yours will arrive! (Adding, to me, a reader’s reality is their handle, and even more their actual comments. I don’t mentally connect handle to email, let alone to a contribution. So if I’ve snarled at you, take comfort that all are snarled at equally!)