Lambert here: One of my crotchets is the trope that markets “heal.” Markets aren’t organic beings, so they can’t do that. Worse, the trope presents its user as a physician, knowledgeable in the art of healing, putting their art at the service the suffering. Obviously, for today’s crop of neoliberal economists, that’s just a ridiculous presumption, bordering on effrontery.

The labour market recovery in OECD countries has been steady but slow since the Great Recession. More worrying [to whom?] is the fate of wage growth over the same period. This column assesses the implications of stagnation in the labour market for growth, wages, and inequality. It finds that structural weaknesses in labour market performance have become more visible as markets recover from the Great Recession. The policy response must include macroeconomic policies aimed at strengthening investment, and structural policies to support growth while nudging workers towards higher-skilled jobs.

The Jobs Gap Is Closing (Finally)

The jobs recovery has been underway since the first quarter of 2010, when the OECD average employment rate reached its post-crisis trough, with only 58.6% of the population (ages 15-74 years) employed. This was 2.2%  lower than the employment rate in 2007, corresponding to 20.3 million missing jobs. Despite the slow and uneven nature of the economic recovery, the jobs deficit had fallen to 5.6 million by the end of 2015 and the OECD Employment Outlook 2016 (OECD 2016) now projects that the jobs gap in the OECD area will close during the course of 2017 (Figure 1). While this is welcome news, the fact that the Great Recession depressed employment for nearly ten years testifies to its severity and the price workers have paid.

Figure 1 The jobs recovery continues, but remains incomplete in the majority of OECD countries

As is usually the case, averages tell only a part of the story. Some countries experienced only a shallow or short recession and employment in these countries has long since returned to, or climbed above, its pre-crisis level. Indeed, employment rates are now more than 5% above their end-2007 levels in Chile, Germany, Hungary, Israel, and Turkey. At the other extreme, the jobs deficit is still large in Greece, Ireland, and Spain (where the jobs gaps are currently 9%, 7.9% and 8.5% respectively, and projected to remain sizeable, albeit smaller, by the end of 2017). While it is encouraging that employment is now rising quite rapidly in these hardest-hit countries, a full jobs recovery remains some way off and there is a risk that it will not be achieved before a new recession arrives.

The Great Recession was characterised not only by severe job losses but also by widespread and often deep wage adjustments. Real wages fell sharply during the crisis in hard-hit countries such as Greece, Ireland, Portugal, Spain, and the Baltic States, but wages stagnated or barely grew almost everywhere. Comparing real wage growth between 2000-07 with that between 2008-15 suggests a sharp deceleration in a number of countries, including the Czech Republic, Estonia, Latvia, and the United Kingdom. By 2015, real hourly wages in these countries were more than 25% below where they would have been if wage growth had continued at the rate observed during 2000-07, and this wage gap exceeded 20% in Greece, Hungary, and Ireland. The wage story is also discouraging in some countries not experiencing a wage gap in this sense (or only a small gap), as in Japan and the United States, where this reflects a continuation of the wage stagnation that already characterised the pre-crisis period. There are a few happy exceptions, most notably Germany, where wage growth has been significantly stronger since 2007 than during the pre-crisis period. 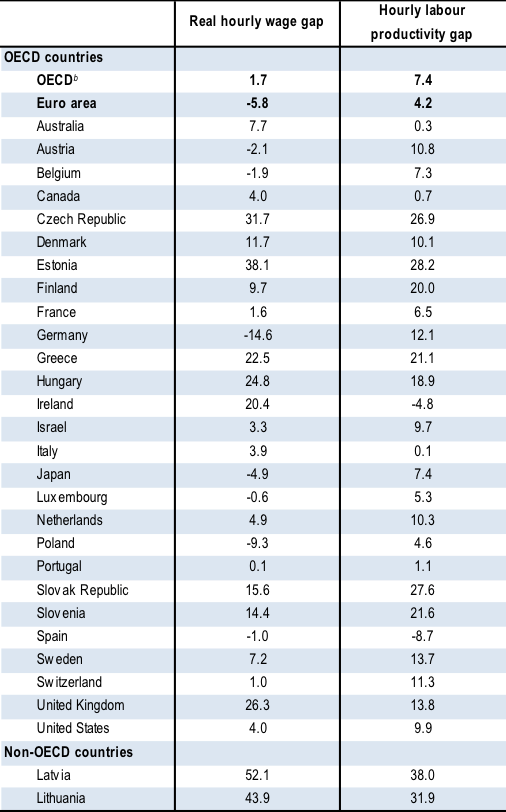 Whether workers can ever recuperate the potential wage gains lost since 2007 is uncertain, especially if labour productivity growth continues to stagnate. The prospects for returning to vigorous wage gains is thus closely tied to whether the global economy manages to move from the current low growth equilibrium characterised by low investment, subpar productivity growth, and historically weak international trade. This in turn calls for a comprehensive policy response, including more ambitious use of fiscal policy and additional structural reforms. Labour market policies will need to contribute to this broader effort while also balancing the short-run need to complete the recovery with the longer-run imperative to support a return to stronger and more broadly-shared wage growth.

Skills policy can play an important role in boosting productivity and wages. In the past, most of the attention has been on skills development through the expansion of education and improvements in the quality and content of curricula. New analysis reported in the Outlook [SH1] shows that it is equally important to assure that workers can make full use of their skills at work. Among equally educated and skilled workers, those who make fuller use of their information processing skills on the job are more productive, earn higher wages and have higher job satisfaction. There are large international differences in skills use that do not closely track cross-country differences in workforce proficiencies. For example, Japanese workers have considerably better literacy skills than their US counterparts, but use their reading skills significantly less at work (see Figure 2). Governments can and should enact policies that nudge employers towards better skill use. Doing so would help to lower the risk of the overall economy becoming stuck in a low-growth equilibrium, even as it improves the well-being of workers.

Figure 2 Skills proficiency and skills use across OECD PIAAC countries

Notes: a) Countries are ranked by their average proficiency score in literacy and numeracy; b) Data for Belgium correspond to Flanders.
Source: Survey of Adult Skills (PIAAC) 2012, 2015.

A Smarter Approach to Structural Reform Is Also Needed

Moving OECD economies away from the current slow growth equilibrium requires a renewed effort at structural reforms. While there is a broad consensus on the beneficial effects of well-targeted and fully implemented reforms of product and labour markets on productivity and hence average living standards in the long run, these reforms often face strong political opposition due to concern about their short-term distributional effects. These are important concerns in the context of high inequality. The new evidence presented in the Outlook [SH1] points the way toward smarter reform strategies that reduce, or even avoid, the temporary disruptions associated with the implementation of structural reforms. For example, it is shown that reforms to employment protection rules, which can temporarily depress employment, tend not to have that effect if implemented during an economic expansion and in countries characterised by large segmentation in the labour market. Moreover, the evidence suggests that complementary measures to promote greater internal adaptability of firms and more effective unemployment benefits can further help minimise short-term adjustment costs. Both the current weakness of productivity growth and the fact that most OECD countries are in the middle of an expansion indicate that now is a particularly good time to consider implementing additional structural reforms.

As labour markets continue to heal from the impact of the Great Recession, structural weaknesses in labour market performance become more visible, including stagnant wages in the lower and middle ranges of the earnings distribution. This requires a coordinated government policy response, with macroeconomic policies aimed at strengthening investment, and growth being supported by structural policies, even as they help workers to navigate today’s difficult labour markets.

Summers, L (2016), “Interest rates are at inconceivable levels, and we must confront what that means”, WONKBLOG, The Washington Post, 6 July