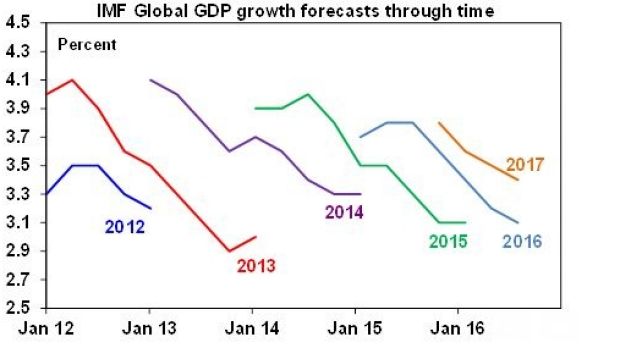 Brexit has forced the International Monetary Fund to abandon plans to lift its forecasts for global economic growth, forcing a downgrade with more to come if its “benign” assumptions don’t hold.

“The Brexit vote implies a substantial increase in economic, political and institutional uncertainty, which is projected to have negative macro-economic consequences, especially in advanced European economies,” it said in its economic update released in Washington on Tuesday.

The fund’s chief economist Maury Obstfeld said Brexit had “thrown a spanner in the works”.

This global business cycle stinks and the downgrades were coming anyway as China slowed again and the US tightened. Fact is, the only thing keeping the cycle going at all is stimulus of all varieties so why do these folk keep upgrading growth outlooks as if some wonderful private sector virtuous cycle will magically appear? The answer of course is that if they don’t then the headwinds will get even worse via the crashing confidence fairy.

The world is undergoing a secular deleveraging coupled with a demographic accident that has years, probably decades, to run.