The Irish government has just told such a howler that the media took notice yesterday. Admittedly, saying your economy grew over 26% in a year, absent massive foreign rebuilding after a war, is so incredible as to elicit well-deserved scorn. From the Financial Times:

The Irish have written some notable works of fiction — James Joyce and Flann O’Brien produced imperishable classics. Now there is a new addition to the national oeuvre — the official narrative of the country’s economy. According to data released on Tuesday, it grew by 26.3 per cent last year.

That is the highest level of growth for decades and far outstrips the original estimate of Irish economic activity last year, which the official Central Statistics Office had put at 7.8 per cent. A growth rate of more than 26 per cent is nearly three times the highest level recorded during Ireland’s Celtic Tiger boom years in the early 2000s.

In fact, what was the supposed cause of this miraculous result? Again from the pink paper:

The official explanation was that the surge in gross domestic product was caused by “inversions”, in which companies move their assets or their domicile to Ireland to avail of its super-low 12.5 per cent corporate tax rate; companies moving intellectual property to Ireland for the same reason; and corporate restructurings. In other words, it has only a tenuous relation to activity in the real economy and tangible things such as the creation of jobs…

This latest revision is the most extreme by far. “This revision primarily reflects statistical reclassifications relating to the treatment of inversion deals involving US multinationals, purchases by aircraft leasing firms and companies relocating assets to Ireland,” said Philip O’Sullivan, an economist at Investec Ireland.

In fact, back in April, we ran a post by illian Doyle, an economist with the People Before Profit Alliance of Ireland, that debunked the 7.8% growth figure published earlier as unduly rosy, again due to how Ireland is as a tax haven for multinationals. From his article:

Ireland’s is a recovery built on sand – and some highly suspect statistics.

The ‘Great Recovery’; The Hope vs the Hype

The final lines of CNN’s report alluded to the real reason for our eye catching growth figures, namely ‘Ireland is widely known as a tax haven’. Yes owing largely to our status as a tax haven/offshore financial centre, our headline figures are dodgier than Donald Trump’s hairdo….

You see right now we have two rival economic narratives vying for supremacy. The first one, which can be considered the establishment’s version, tells the tale of a great recovery and finds regular expression amongst the talking heads in our mainstream media. The second, which is one of ongoing hardship, has to fight hard to get its message across….

Total Fixed Asset Investment or FAI is a measure of capital spending in terms of things like machinery, infrastructure, land, technology, etc. After all, you need to be building ‘stuff’ if you are going to build the economy. 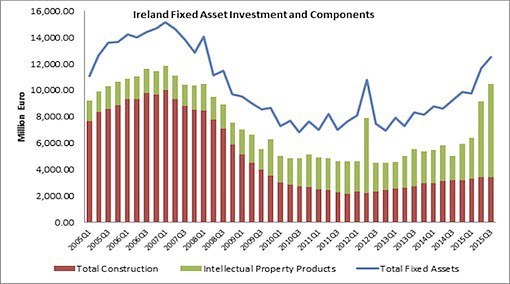 Construction is included under the heading ‘Total Construction’ to give you an idea of the impact that a decline in a major sector can have on an economy such as ours in the post 2008 period. Intellectual Property Products, which arise from investment in things like patents, trademarks, industrial design and copyrights, is included to highlight what is arguably the real driver of our current economic growth.

Take a close look at this ‘Intellectual Property Products’ measure. Anything look peculiar? Well wee see spikes (Q2 2012; Q2 and Q3 2015) which seem to just double in the space of a few weeks and then disappear. There’s clearly something up here, and that something is patents. With multinationals starting to relocate some of their intellectual property out of ‘bad tax havens’ (Bermuda, Cayman Islands, etc) and into ‘good tax havens’ (Ireland, Luxembourg, etc) our growth figures were give a massive shot in the arm.

Our final a chart plots our nominal GDP growth together with GDP growth minus this IPP component. When we do this our supposed growth of 7.8% does the kind of disappearing act that the late great Paul Daniels would have been proud of. Some recovery, huh?

As we’ve seen from above, the lion’s share of this growth is illusory. How many people does it take to administer the relocation of a patent to Ireland? Just a handful of select individuals, customarily derived from the usual firms Goldman Sachs, Arthur Cox, KMPG, etc, what the Tax Justice Network calls the pinstripe mafia.

Yves again. Look at the last chart. It shows growth falling to zero. Now since it was positive previously, the Irish economy probably did show some growth, but a guesstimate is under 3%.

So the effect of putting out the barmy 26.3% figure was in fact a masterstroke of propaganda. Economists and the media piled on, saying the figure was clearly too high, but no one questioned the basic premise that there was growth.

And of course, the fact that the figures are now so dubious allows for another statistical correction down the road, which means analysts will also have trouble tracking trends over time unless they unpack the data.

If you want to get an idea of how this all works, please read Lee Sheppard’s story in Forbes as to how Apple organized its affairs so as to have an Irish principal company and an Irish holding company that have tax jurisdiction nowhere (and this story of how Apple operates is very much simplified from her version in Tax Notes, which is paywalled). All of Apple’s foreign revenues go through these entities.

Now as I understand it, per conversations with Sheppard, here is the even doozier part. None of the revenues of these Irish entities go through Ireland. Nada. Those Irish companies have accounts at US banks and are managed out of Nevada as an internal hedge fund.

Mind you, I don’t believe this ongoing chicanery is part of the 2015 Ireland GDP story, Apple’s arrangement is different than that of most other tech companies that use Ireland to greatly reduce their taxes. The others locate the intellectual property in Ireland or another tax haven. By contrast, Apple has the intellectual property in the US and the Irish companies license it. This arrangement works because it appears to be grandfathered. However, if Apple acquired a business, or even bought some patents, and moved that intellectual property and moved that into Ireland, that would count as an increase in GDP.

So you can now better understand Doyle’s consternation. The growth story is one of at best a few professionals getting a bit more income to move intellectual property around. And there’s no reason to think that even that work necessarily went to anyone in Ireland. But the Irish government can use its story of impressive growth to hold supposedly uninformed people in the real economy at bay when the demand that officials do more, and tell them that they just aren’t seeing the miraculous improvements, which are simply miraculous sleight of hand.