Banks ‘could be forced to keep all your money’ Daily Mash

PM Theresa May meets Tory MEPs over Brexit ‘red lines’ BBC. It’s disconcerting to see May use the same terminology as Tsipras and Varoufaks. Also notice the pretense (or worse, ignorance) that the EU has set down some boundary conditions.

After Cameron: How can you mend a broken country? Open Democracy. Includes some important facts.

The European Revolt Against the Neoliberal EU Real News Network

In reversal, Juncker backs sanctions on Spain and Portugal Politico

Are Italy’s Banks A ‘Doom-Loop’ Risk That Could Bury The Eurozone? ValueWalk. A really good overview.

Is war inevitable in the South China Sea? RT (resilc)

US does 1/2 of all World’s Arms Sales, then Surprised by Global Violence Juan Cole (resilc)

Two New Reports Conclude Evidence of Fraud In The 2016 Democratic Primaries Could Be Large Enough to Change Outcome Facebook (furzy). Note I have not clicked through this link to see if the studies are any good.

How Sanders Delegates Organized a Walkout Under Everyone’s Nose NBC. Phil U: “​Yet this is the only mainstream coverage I see.”

Nina Turner, Prominent Sanders Delegate, Ejected from DNC Common Dreams (Phil U). Clinton continues hippie-punching the left even as she is losing ground to Trump. You want to get Bernie supporters to reject you, this is the way to do it.

A day after calling for party unity, Bernie Sanders goes back to being an independent Fusion (Kim Kaufman)

Bill Clinton backs ‘best friend’ Hillary BBC. It appears that Team Dem recognized that the most important thing that happened at the Republican convention last week from Trump’s perspective that his family humanized him, leading to a big bounce in the polls, so this appears to be a replication of that strategy.

Behind Democrats’ email leak, U.S. experts see a Russian subplot Reuters. EM: “Ah yes, ‘unnamed U.S. intelligence officials’ – a highly reliable lot there. And so quick at tracking down the perps! They knew within hours that Assad was behind the Syrian sarin gas attack, and that the dastardly, evil, sneaky, bad, wicked, naughty, evil (I know I already said ‘evil’ but it’s *so* evil it deserves repeating) Rooskies brought down MH17. We need to start listening to these people – they are after all highly credentialed experts ‘who are in agreement’!”

Will Bernie’s Supporters Stay Home on Election Day? We Asked Them. Intercept. This is a lousy way to get answers. Marketing professionals and survey researchers know full well that people lie about all sorts of things to direct inquiries, like how often they have sex and how much money they make. For instance, no one ever tests a new product by asking consumers if they might buy it because 1. They will have a propensity to say yes to pleases the researcher and 2. Even if they like the product, whether they buy it in real life depends on how it fits into their budget then, whether they see it in stores, etc. And with Trump, at least in blue cities, I’ve both heard of and seen a lot of self-censorship re Trump, as in the interviewer needs to signal he hates both candidates so that the other party feels it’s OK to say, if this is true, “I do too, but [fill in blank re reason], I’m probably voting for Trump.” Clinton supporters get very aggressive with anyone who is not a true believer. But some are not shy. As resilc says, “i will crawl in to vote Trump.”

Hillary Clinton And Donald Trump Are Now Equally Unpopular FiveThirtyEight (resilc). This is deadly. A MSM reporter you heard of told me that Trump’s pollster said if the could get Hillary’s negatives as high as his, he’d win.

The Party’s Over Counterpunch (resilc)

New York City police upgrade gear after Texas, Louisiana shootings Reuters. EM: “What – no RPGs? No flamethrower-equipped armored vehicles? No laser weapons? These guys are just asking to be attacked!”

Why this is the perfect time to invest in infrastructure, and why it probably won’t happen Los Angeles Times

One of New York City’s busiest subway lines to shut for 18 months Reuters. There were times when I rode the L regularly. It wasn’t running often enough to begin with. This is going to screw up a lot of people.

Fed to Stand Pat, but Statement may be More Constructive Marc Chandler

Fed may edge closer to rate hike CNBC. The Fed is eager to raise rates because the banks want it.

Highest-paid CEOs run worst-performing companies, research finds Independent (Dan K). Study here. Note this is not a new finding, but this study does an important job in differentiating between “summary pay” which is what is reported v. what they actually took home.

Antidote du jour. NYCTerrerist: “The image is from The Cats-in-Residence Program, a project I’ve been working on for many years. now at Worcester Art Museum:

this ‘purr-formance piece’ features rescue cats (from Worcester Animal Rescue League) who are living in an art installation filled with cat-friendly sculpture thru. Sept 4.

We celebrate rescue kitties and want to hook up as many ‘purr-formers’ as we can with purr-manent gigs as housecats.

This is the fourth iteration of the installation by artist/curator Rhonda Lieberman, the first at a museum, and so far 61 kitties have been adopted through this piece!

If you can’t make it to Worcester, you can watch the purr-formers 24/7 on this MEOW Cam: 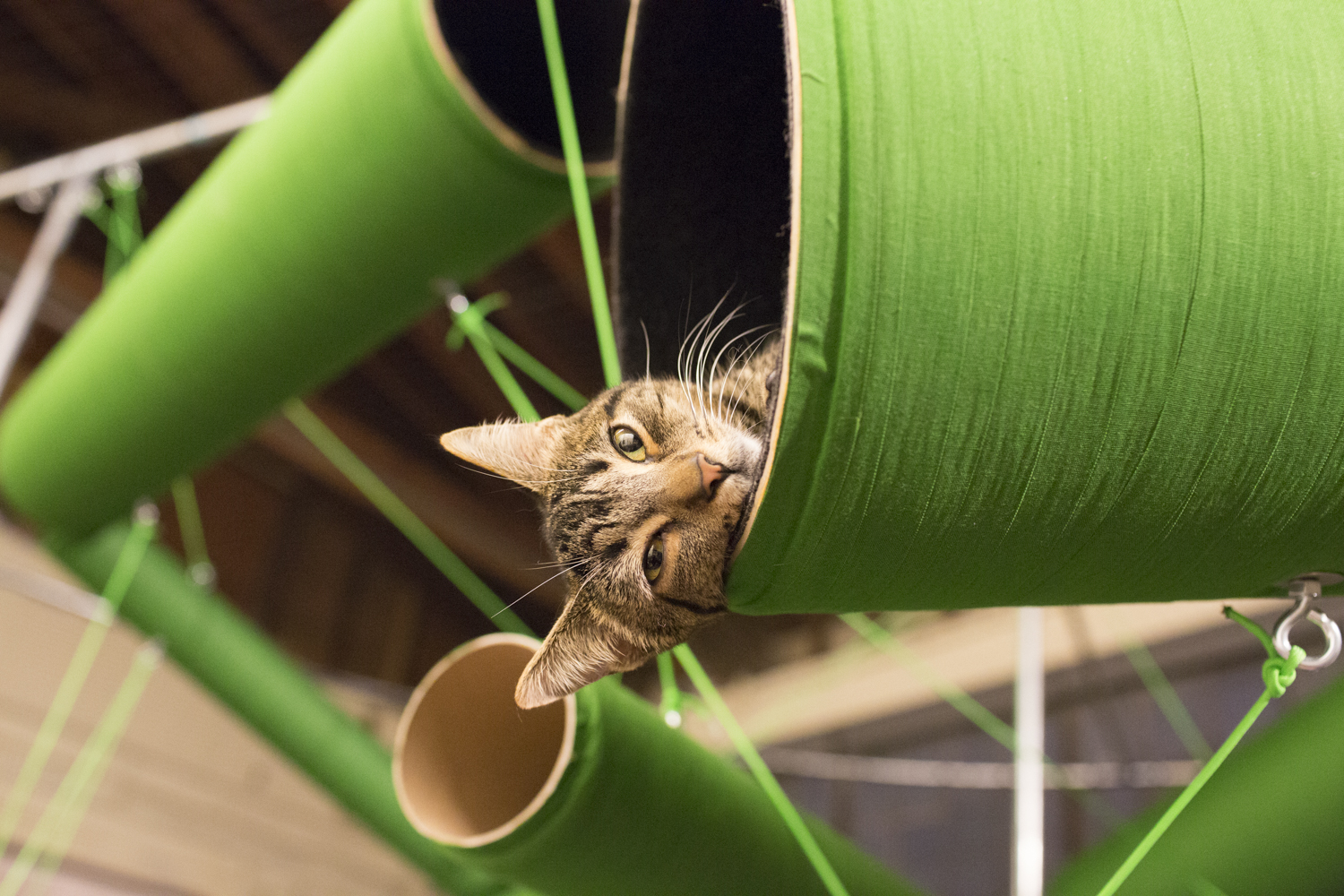