Today’s labour market in the US has much in common with that of the late 19th and early 20th centuries. Then, as now, there were few government protections for workers, fears over cheap immigrant labour, rapid technological change, and increasing market concentration. This column explores the lessons that can be drawn from the earlier ‘Gilded Age’. The findings suggests that even as markets play a greater role in allocating labour, legal and political institutions will continue to shape bargaining power between firms and workers.

Phenomenal increases in income and wealth inequality in the US and other rich economies have been observed over the last four decades, driven by skill-biased technological change (Autor et al. 2008), increased trade (Autor et al. 2013), and institutional and policy changes that have allowed the rich to earn/extract a greater share of the economic pie (Alvaredo et al. 2013, Piketty 2014). An associated rise of populist politicians suggests a link between economic inequality and political polarisation (McCarty et al. 2006, Autor et al. 2016), and potential for costly conflict (Esteban and Ray 2011, Bowles and Jayadev 2006).

Moreover, there is every reason to believe that past trends will continue –technological change seems to continually enhance the return to capital and the earnings of the most skilled (while displacing the less skilled); it is increasingly easy to hire workers across borders in online labour markets; and greater numbers of workers are now part of the ‘gig economy’, with employment relationships replaced by contractor relationships offering workers limited collective bargaining rights and fewer legal protections (Horton 2010, Brynjolfsson and McAfee 2014).

Remarkably, looking ahead towards the labour market of the future feels a lot like looking back at the labour market of the past, particularly that of the late 19th and early 20th century ‘Gilded Age’ in American history. Then, as now, few government protections for workers existed, save those they could secure for themselves; then, too, native-born low-skill workers felt threatened by cheap immigrant labour from abroad while being buffeted by rapid technological change and increasing market concentration. Labour market outcomes in the modern world also resemble those from the early 20th century – the Gilded Age was the last time such high levels of economic inequality were observed in the US.

The American Gilded Age labour market came extraordinarily close to the archetypical labour market taught in Economics 101 (Fishback 1998). One might think that in a world without regulatory red tape, the labour market would simply equate supply and demand, establishing a ‘market wage’ for a unit of labour, eliminating non-competitive rents, and diminishing the stakes from conflict. One might further assume that in such a world, the institutions resolving such conflict would be irrelevant.

However, we provide evidence that despite the lack of regulation, economic frictions in the labour market generated rents, and costly and violent conflicts over these rents were pervasive. Rather than giving rise to efficient allocations, the unregulated labour market generated militant and coercive labour movements and employer organisations, and led to increased allocation of resources toward the domestic policing and military capacities of the US government.

Our approach to studying frictions in 19th century labour markets is to use the 1850-1880 national samples from the 19th century Census of Manufacturing (collected by Jeremy Atack, Fred Bateman, and Thomas Weiss) to test for firm-specific wage premia. While it would not be surprising if the value added of firms were correlated with wages across markets, in a perfectly competitive market there should be little variation in the wages of observably-similar workers across firms within the same labour market, at a single point in time. Put simply, in a perfectly competitive labour market, similar labour sold in the same labour market should sell for a single price. 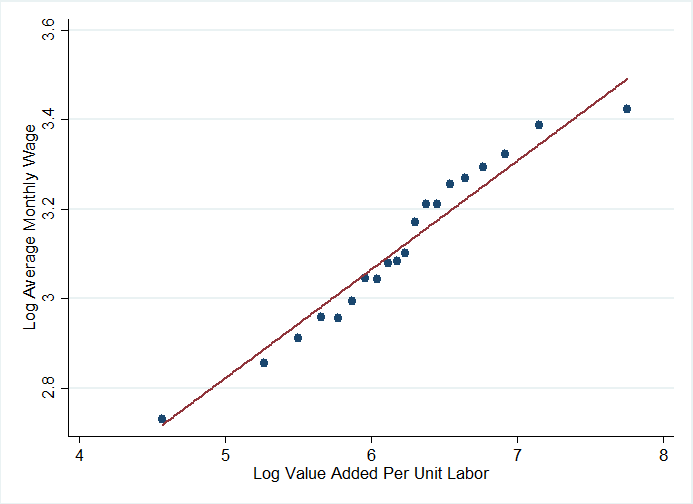 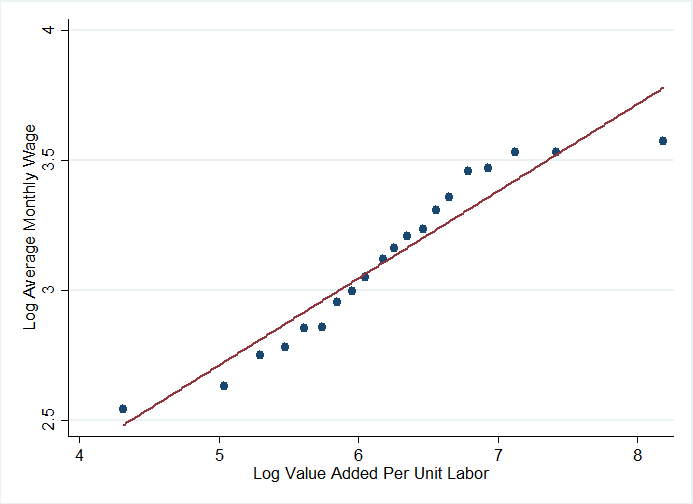 In assessing the relationships in Figure 1, one still might be concerned about some omitted variable associated with both firm value added and wages. To mitigate endogeneity concerns, we use within-labour market variation in output product prices as an instrument for firm value added. Using this instrumental variable approach, we continue to find a significant, positive relationship between firm value added and wages within a local labour market. Note that this is consistent with recent work on contemporary labour markets – indeed, our rent-sharing elasticity is estimated to be 0.147, which is remarkably similar to estimates from contemporary data (Card et al 2016).

These findings suggest that firms matter in determining wages, and thus that firm-specific strikes could affect workers’ pay. Consistent with this is the occurrence of fierce – sometimes deadly – and frequent strikes throughout the 1880s and 1890s (see Figure 2). Also consistent with this is evidence we find of a significant, positive correlation between the occurrence of a strike and worker wages at the firm level (controlling for a wide range of firm characteristics), based on historical data in the ‘Weeks Report’ (1886).

Figure 2 Number of work stoppages in the US 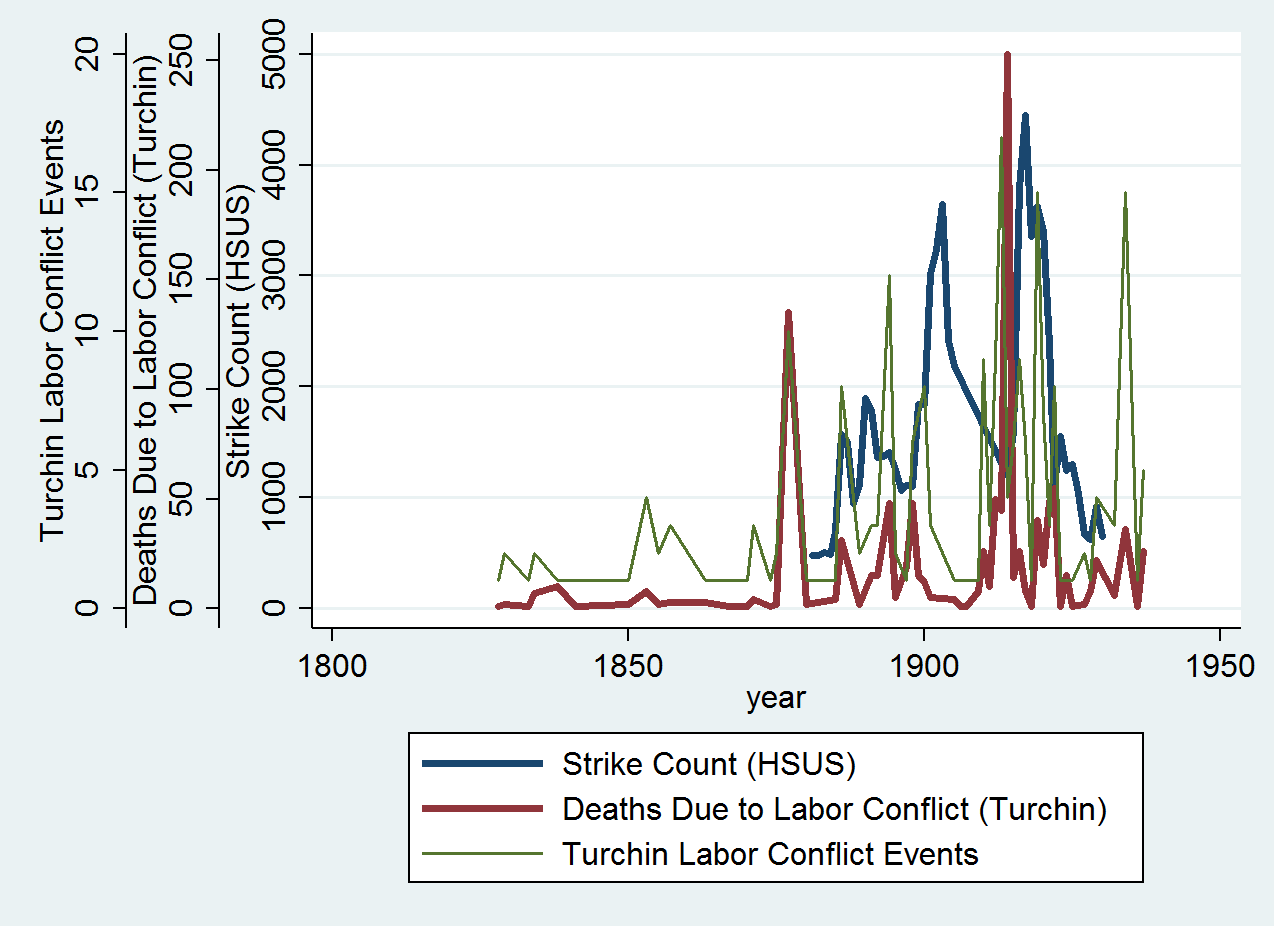 US Commissioner of Labor data (from 1888 and 1896) reveal that a key feature of successful strikes was the ability of incumbent employees to prevent the use of replacement workers, via persuasion, pickets, or violence. One can see this in the left-hand panel of Figure 3, where we plot the (negative) relationship between the success of a strike and the use of replacement workers (conditional on city and year fixed effects, as well as the log of employment at the firm in question). In the right-hand panel of Figure 3, we show that wage increases resulting from strikes also depended on strikers’ ability to prevent the hiring of replacement workers. Given these stakes, it is unsurprising that employees were willing to use physical coercion, when necessary, to try to prevent the hiring of scabs. 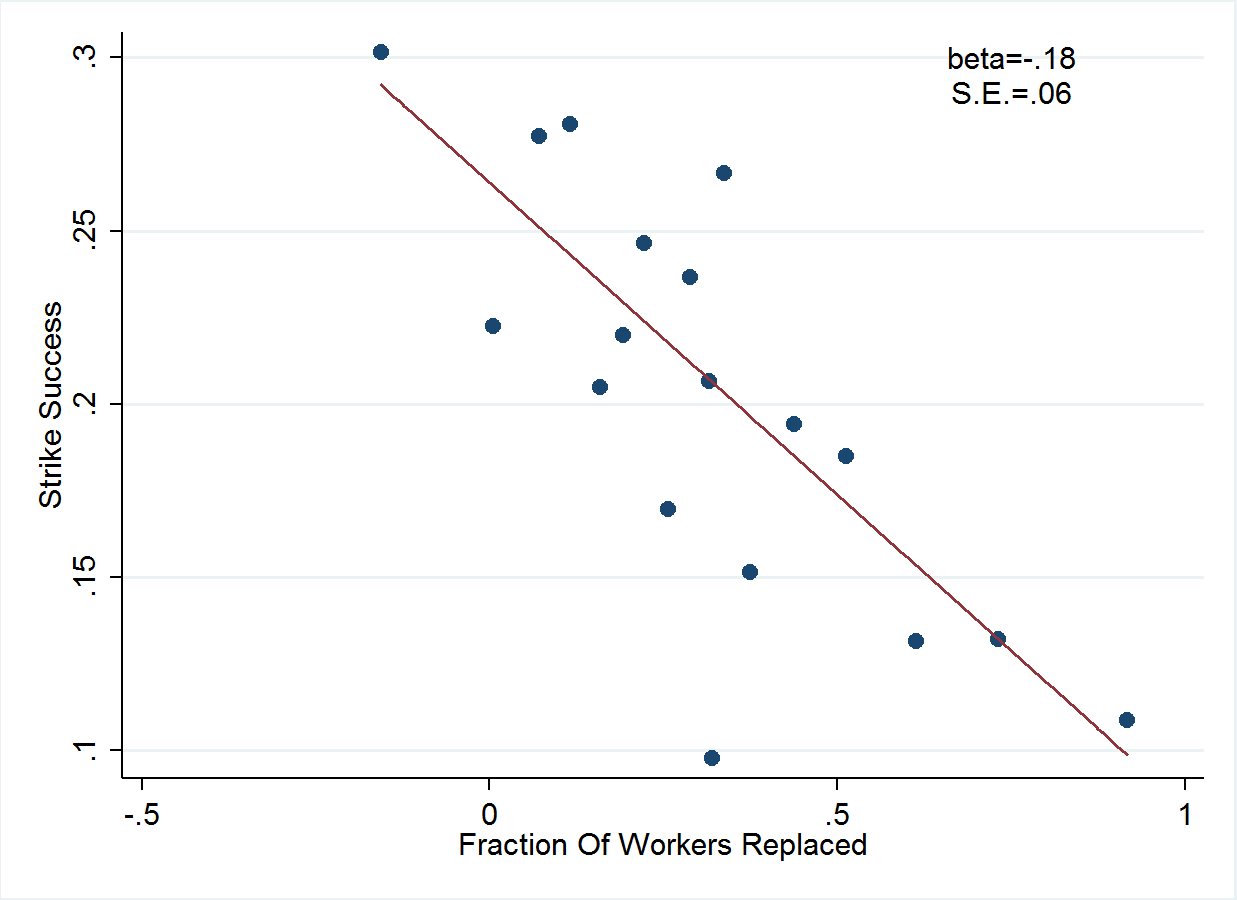 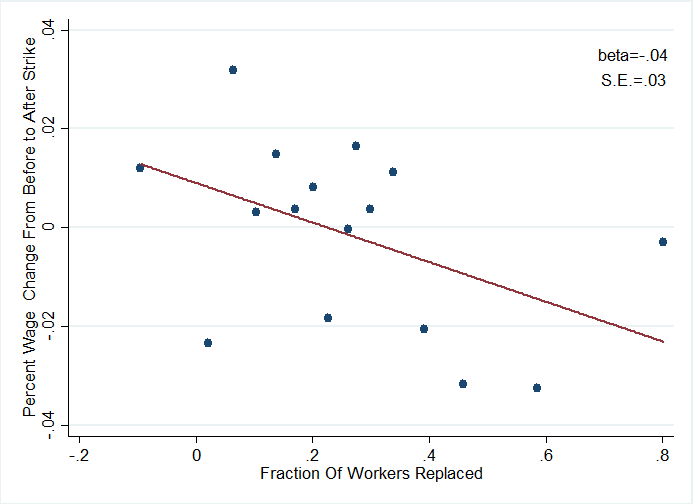 Employers, too, understood that breaking picket lines was crucial, and they responded to striking workers’ use of force with coercion of their own. This was often accomplished by enlisting the power of the state. Riker (1957) shows that between 1877 and 1892, the modal use of state militia was in response to labour unrest. In Figure 4, one can see that state resource allocation was affected by labour unrest: the frequency of strikes in the late 19th century was significantly, positively associated with state militia expenditures. 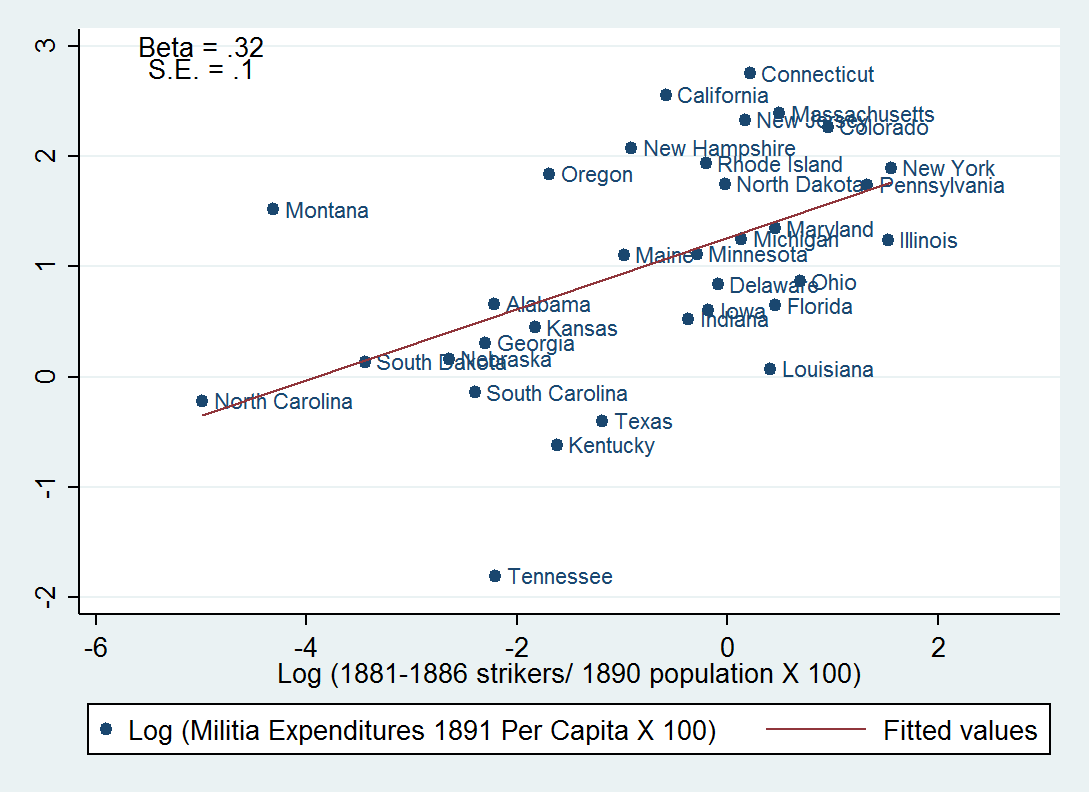 Notes: Militia spending and strikers. Figure plots the log of militia expenditures per capita against the number of striking workers per capita, by state. Data come from Riker (1957).

Government intervention on the side of employers was supported by the courts, particularly following the adoption of the judicial labour injunction as a legal tool to prohibit strikes. Figure 5 shows that injunctions increased rapidly beginning in the1890s, occurring most often during the period of greatest labour conflict. 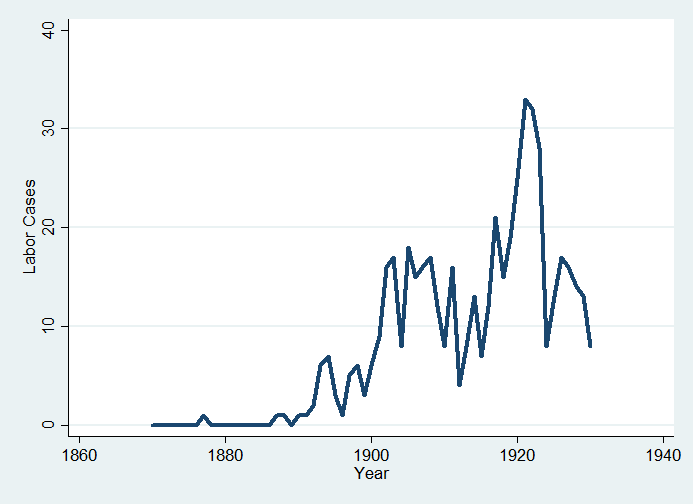 Notes: Figure shows counts from Lexis-Nexis and Westlaw, based on a search for “injunction” and (labour OR strike OR workers OR collective bargaining OR combination), and reading of cases to ensure that injunctions were issued in response to labour disputes.

Looking around today, it is obvious that inequality and conflict over the distribution of wealth and income remain salient a century after the first Gilded Age. History is never a perfect guide, but the late 19th century suggests that even as markets play a greater role in allocating labour, legal and political institutions will continue to shape bargaining power between firms and workers, and thus the division of rents within the firm. What remains to be determined – and battled over – is which institutions are empowered to act, and whose interests they will represent. Regardless, latent labour market conflict seems likely to be a prominent feature of our new Gilded Age.