By David Miles, Imperial College Business School. Originally published as a chapter in the VoxEU ebook, Brexit Beckons: Thinking ahead by leading economists, available to download free of charge

To some, the Brexit referendum was a failure by economists to persuade UK voters that leaving the EU would entail major economic costs. This column argues for a more nuanced view by making two points. First, it questions whether there really is a consensus about the costs. While all the mainstream estimates were negative, they ranged from rather small to nearly 10% – a range that hardly sounds like a consensus. Moreover, the key mechanism – Brexit’s impact on productivity growth – is not something economists really understand. Second, a rational voter could accept the cost as a tolerable price for having greater independence from EU decisions. Economics does not tell us that a voter who makes such a choice is ignorant, irrational, or economically illiterate.

There is some angst in the economics community about a perceived failure to persuade UK voters of what some see as the overwhelming consensus that Brexit would bring major economic costs. In a thoughtful letter to The Times (28 June 2016), Paul Johnson, Director of the Institute for Fiscal Studies (IFS), said: “… it is clear that economists’ warnings were not understood or believed by many. So we economists need to be asking ourselves why that was the case, why our near-unanimity did not cut through.”

The latest survey of academic economistís views conducted by the Centre for Macroeconomics in the wake of the Brexit referendum, asks:

Was There a Consensus?

But is there really a consensus about the costs of the UK leaving the EU? Even if there is some sort of consensus around central estimates, is there an agreement about how uncertain such estimates are and how large that uncertainty is? Is it so clear that, even if there was a united view from economists, it was ignored?

The IFS Report, Brexit and the UK’s Public Finances, published on the eve of the referendum, provided a comprehensive summary of estimates of the long-run impact on GDP of Brexit (Emmerson et al. 2016). Table 3.1 of that report (reproduced below as Table 1) shows estimates of the impact on 2030 GDP, ranging from a cost of a few percentage points to up to nearly 10%. There is a consensus here only in the sense that nearly all estimates are for a negative impact. But the differences in estimates are so large that it is surely a stretch to see this as a ‘united view’.

One factor here is that the mechanisms that could create a long-run hit to GDP are not very well understood.  A critical factor – indeed almost certainly the critical factor – is how productivity will change as a result of the UK being outside the EU. One element of that link is that between Brexit and FDI, and then between FDI and productivity – neither of which is at all easy to predict. 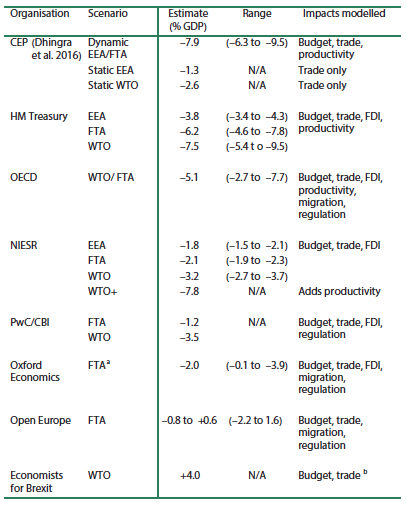 More generally, economists’ understanding of what has driven UK labour productivity in recent years is very low. In the period since the financial crash of 2007-2008, labour productivity in the UK has reached a level that is probably around 15% or more below that which seemed likely on the eve of the financial disruption. The Bank of England has applied thousands of economist-hours to trying to account for this fall. It still remains largely a mystery why productivity has been so poor eight years after the crash and when many other economic indicators (e.g. unemployment, stresses in bank funding and credit availability) have returned to something that looks normal.

The single biggest determinant of the long-run costs of Brexit – its impact on productivity – is something which the post-financial crash evolution of UK output per head should make us very unconfident about predicting.

Trade-Linked Impacts Are Easier to Estimate

The purely trade-related aspect of a hit to GDP from Brexit may be more reliably estimated.  And the economic mechanism at work here is more intuitive: if less trade means less specialisation, then a country ends up devoting more resources to areas where it does not have comparative advantage. There is a good deal of empirical evidence that openness is inked to productivity. And some of that evidence is very stark – look at North Korea and South Korea. It is indeed overwhelmingly likely that a retreat to become a much less open economy would be very bad for incomes. But the relevance of that observation to how a UK outside the EU will fare is very far from clear.

In any case, the trade-only effects of Brexit (i.e. setting to one side the potential knock on effects on productivity growth over time) are often estimated to be rather small. A Centre for Economic Performance study puts the trade effects on 2030 GDP at between 1.3% and 2.6% of GDP (Dhingra et al. 2016). No one should think that 1-3% of GDP is trivial. But that number should be seen in context – UK GDP is now nearly 20% lower than a continuation of the trend the economy seemed to be on before the financial crisis of 2008.

But suppose we put to one side the rather wide range of central estimates of the long-run effect of Brexit on GDP, and also ignore the enormous uncertainty about any one such central estimate, and stick to the view that there was a consensus amongst economists about the effects and that this was that Brexit is significantly bad for incomes. What is the evidence that such a consensus (to the extent that it existed) was ignored by those that voted to Leave? I think we should be realistic as economists about how little we really know here.

One point is obvious. A rational voter could accept that there would be an economic cost to leaving the EU but think this is an acceptable price to pay for not having to accept some EU decisions over which the UK has limited say. There clearly are decisions of this sort – from judgements by the European Court of Justice, to rules on financial regulations (e.g. the strange decision to make capital requirements on banks maximum harmonisation, or EU rules on bonuses), to accepting the right of entry of people to whom other EU countries have decided to grant citizenship.

Economics has little to say about whether someone who values avoiding being tied by such decisions, and accepts in return the likelihood of a lower income by a few percentage points, is ignorant, irrational, or economically illiterate. For many years the mantra of many from the European Commission has been the desirability, even the necessity, of “ever closer union”. What does economics tell you is the right answer to the question, “How much should I pay to avoid that?”

As it happens, I did not think it worth paying the price to avoid the risk that the fuzzy concept of “an ever closer union” could create damage down the road. I do not, however, believe those who took a different view were ignorant or befuddled. It is not right to think that if only they understood the economics of it they would surely have voted differently.