Yves here. The idea that more and more economic activity is likely to be devoted to “care work,” such as services to the young and aged, is typically treated as a negative outcome. The authors of this post beg to differ.

Across the world there is much gloom and doom about the impact of technological changes on jobs, as automation and other innovations are seen to threaten not just blue-collar jobs but also many forms of office work. It is true that the way that most of our economies are organised at present, heavily reliant on market mechanisms with less and less public intervention to alleviate the adverse effects, there could well be an increase in technology- driven unemployment.

But even so, some of the extreme pessimism may be misplaced because of the possible emergence of other forms of employment that are more based on human interaction. Particularly, some essential services that enhance the quality of life – which are often broadly clubbed into the composite term “the care economy” – are unlikely to be either as efficient or as socially useful if the element of human interaction is reduced.

Many care services necessarily require face to face relationships, and even if technologies can assist in these and make them more productive, the human element cannot be eliminated. Indeed, better quality care (whether in paid or unpaid forms) typically requires more intensive human input, so standard approaches based on puerile notions of labour productivity are simply irrelevant in such activities.

This in turn means that the care economy broadly defined will continue to be an important source of employment generation in the foreseeable future, and is likely to expand at a faster rate than many other economic activities. This is especially so in the many countries – certainly across the developing world – where care services are currently hugely underprovided by society and therefore forced to be delivered (often in extremely difficult and haphazard ways) by unpaid family labour.

How can we even begin to estimate the likely future global demand for care activities, which include care of the old, the young, the sick, the differently abled, as well as the healthy adults who have different kinds of care needs including all the aspects of quotidian life? This is a huge area of work, made more complicated by the fact that so much care work is performed within homes and communities in often socially unrecognised ways.

But it is possible to provide some initial estimates, based on current employment in care activities in societies where these are more developed and known to be better delivered. Suppose we take Sweden as the benchmark on the basis of which to estimate likely care requirements in the future, since Sweden is known to have a well-functioning (and largely public) health system and is also known to provide reasonable levels of child care and elderly care. Employment in care activities in Sweden relative to the target populations can provide an indicator of the desirable levels of employment. Of course, this is likely to be both optimistic (since most countries currently lag well behind Sweden in such provision) and an underestimate (since much of the employment involved in the provision of such care would not be captured by the occupational classifications alone). So this is clearly an imperfect measure, but nevertheless it provides some broad indications of the potential demand for care.

Here, the Statistical Database of Sweden is used to identify the number of workers in certain care activities in 2014, and compared with the UN population projections for Sweden for 2015. The category of “health workers” includes health care managers, doctors, nurses, physiotherapists, psychologist and psychotherapists, other health care therapists and complementary medicine therapists, dentists and dental nurses and other health care assistants. These occupations together amounted to 762,806 workers in Sweden in 2014, which (given the estimated population of 9,779,426 in 2015) means an average of one such worker for every 12.82 persons.

Now apply this norm to the UN population projections for 2030 for all countries, on the assumption that this is the desirable norm for other countries to try to achieve by 2030 (and is not unreasonable given the Sustainable Development Goals). This gives estimates of the likely requirement of health workers in different regions and in the world as a whole in 2030, which can be compared to the projected working age population (assumed to be 15-59 years) in that year.

A similar exercise can be carried out for dedicated child care and dedicated elderly care. For child care, the following occupations are used for Sweden: pre-school managers, primary and pre-school teachers, and childcare workers and teachers’ aides. When compared with the number of children in the 0-14 age group, this yields a norm of 3.6 children per worker. For the elderly, defined as 60+ years, the occupations taken are elderly care managers and
attendants, personal assistants and related workers. Obviously the elderly are also much more likely to require the assistance of health workers, but this is subsumed under the demand for health workers from the general population. This calculation yields a norm of 16.24 elderly people per worker. This may seem a large number, but it is likely that many people in the 60-70 age range are unlikely to require much assistance. (We do no attempt to measure the care requirements of the differently abled, which would significantly add to the estimates.)

Table 1 provides the results of this exercise in terms of the likely requirement of some categories of care workers using this norm. Several striking features emerge from this. First, if reasonably adequate care services are to be provided to people across the world in 2030, this will require a massive increase in care employment, even in the very limited occupational categories mentioned above. Second, in most countries and regions, this is likely to be a significant proportion of the working age population – and therefore an even larger proportion of the actual employed population. Third, in terms of providing such services to a reasonable level, many more workers will be required in related activities as part of the support and administrative systems to deliver these services. 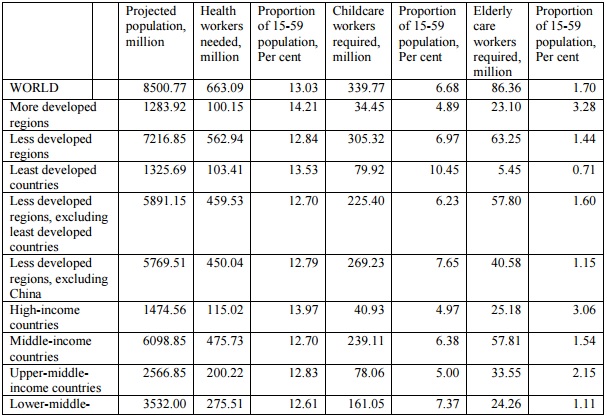 This basic and even simplistic exercise still provides some idea of the potential of the care economy to generate jobs in the future. But this will NOT be delivered by market forces on their own, and nor will such jobs be “decent work” if the market alone is to determine this. The need for state intervention – and for public provision of these essential care services – is therefore paramount. 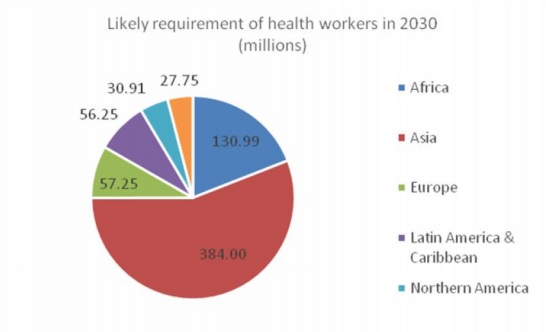 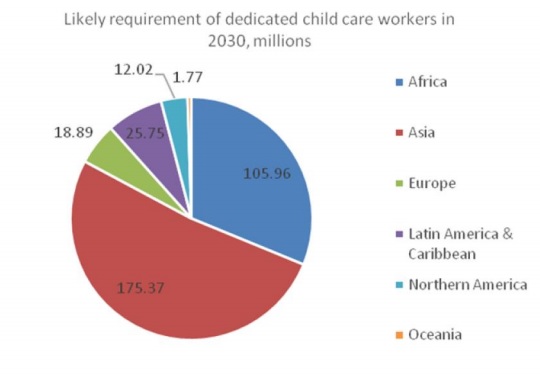 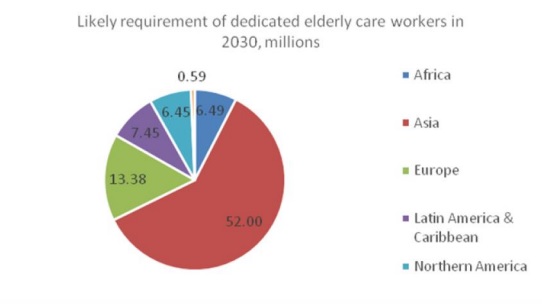