Due to competing responsibilities, Links are light at their 7:00 AM launch time. You should have a fuller ration by 8:00 AM.

Worryingly for May and her Brexit minister, David Davis, several countries — including Germany, Portugal and the Czech Republic — insist that the U.K. adhere to rules on free movement of labor in return for access to the single market in goods and services. Many who backed Brexit did so in the belief it would mean fewer immigrants.

Just three fellow EU members — Denmark, Austria and Bulgaria — cited a shared concern with Britain over immigration, suggesting that May will find sympathy in short supply.

France signaled it is ready to go even further and link freedom of movement to Britain’s ambition of retaining the passporting rights that allow the financial industry to sell services and raise money on the continent.

Jeremy Corbyn’s Labour could lose 50 MPs at next general election because of UKIP’s potential collapse The Sun. Curious to get sanity checks.

Out of sight, out of mind? Europe’s migrant crisis still simmers Reuters

China to resort to aggressive monetary easing in 2016 Xinhua CNBC

Welcome to the Erdoğan fanclub Politico

Stress Over Family Finances Propelled Hillary Clinton Into Corporate World New York Times. We are supposed to take this seriously? My recollection is that the advance on Bill’s book deal was $8 million and hers was $4 million. That was more than enough to settle their outstanding debt and provide plenty of funds for a very comfortable lifestyle, particularly when you factor in that presidential pensions are not shabby either.

If I were worried that Clinton might lose, here’s what I would—and wouldn’t—do… Corey Robin (martha r)

Why the CIA Should Brief Trump American Conservative (resilc)

A Tale Of Two States |American Conservative (resilc). Suggests Trump will not do well in the Rust Belt, and perhaps also that those voters are taking note of Trump looking more and more, policy-wise, like a pretty standard Republican.

In Baltimore Report, Justice Dept. Revives Doubts About Zero-Tolerance Policing New York Times. Recall that Giulani, via police chief Bratton, depicted zero tolerance policing as one of the centerpieces of crime reduction in NYC. Later analyses suggested that getting lead out of gasoline was the primary driver of the fall in violent crime rates all over the US.

Findings of Police Bias in Baltimore Validate What Many Have Long Felt New York Times. It’s unfortunate that this sort of thing needs to ben “validated”. It should be already understood to be pervasive. For instance, early in the days of Black Lives Matter, there was a hashtag on things white people had done in police stops or other encounters that would have gotten them arrested or killed if they were black. And that’s before you get to the fact that men of color are stopped by police in greatly higher numbers than whites.

Three juvenile Cooper’s Hawks in my back yard near Santa Fe, NM.

After a terrible failure last year our resident pair of Cooper’s Hawks succeeded this time around and produced three off springs. Early on one fledgling fell out of its nest, but the two remanning ones managed to grow into charming young males who were recently joined by a slightly older young female that one day appeared out of nowhere.

Interestingly the parent hawks were the ones who left the scene as soon as the young ones were able to fly and thus were expected to fend for themselves. 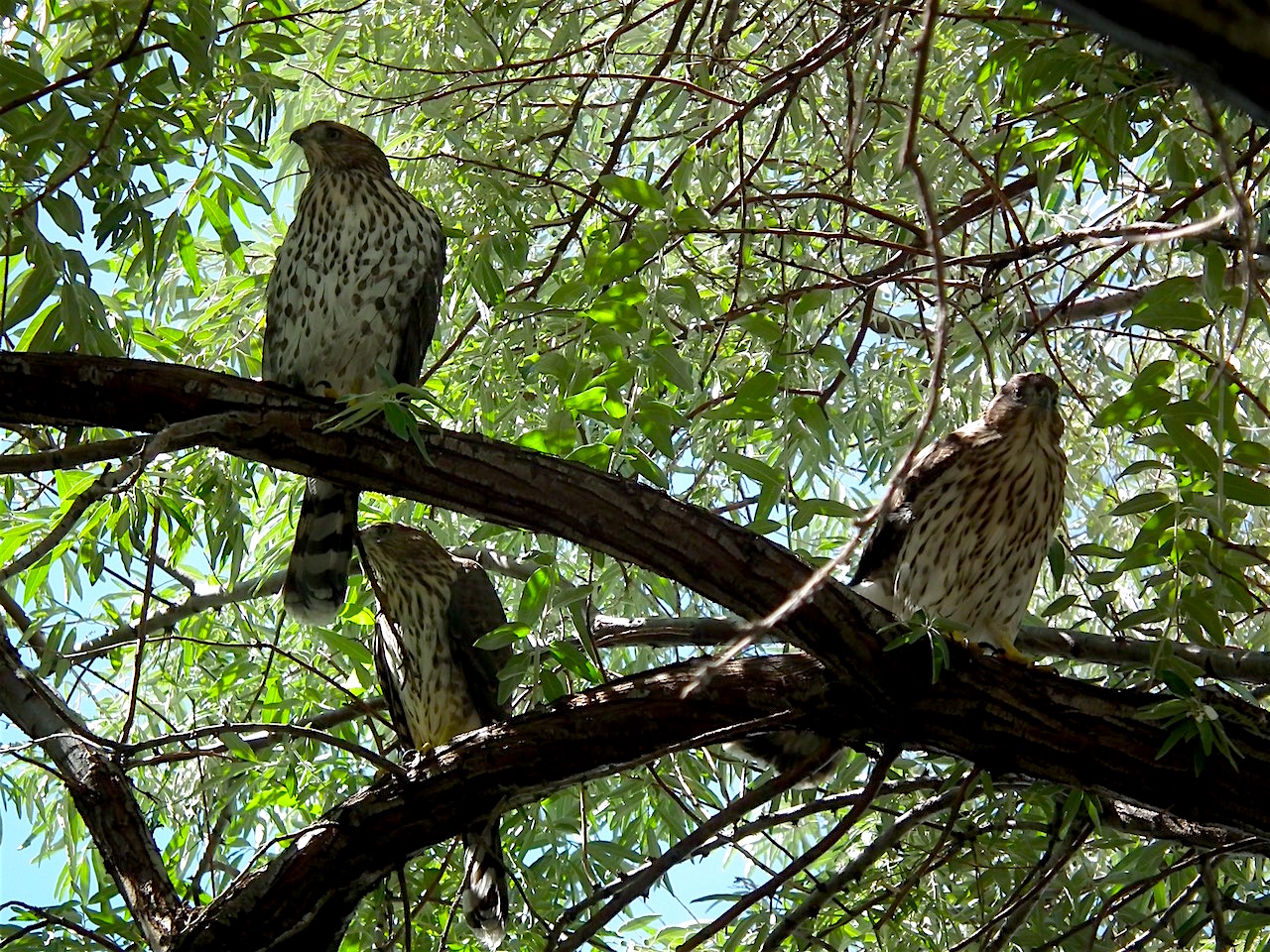