Lambert here: Oh, so now we’re arguing about how to go to war. Whatever. This paragraph, on how the Air Force decided which Vietnamese villages to bomb, caught my eye:

A Bayesian algorithm combined data from 169 questions on security, political, and economic characteristics into a single hamlet security rating. The output ranged continuously from 1 to 5 (where 1 meant ‘very insecure’ and 5 meant ‘very secure’), but was rounded to the nearest whole number. Due to computational constraints, the continuous scores were not saved or printed from the mainframe computer, and Air Force planners only saw the rounded scores. … [T]he hamlets that just barely got rounded down were substantially more likely to be bombed than those just barely rounded up.

And we go to Happyville, instead of to Pain City…

The nature of US military interventions has become relevant in the face of new growing threats, particularly from so-called Islamic State. While top-down strategies that rely on overwhelming firepower are sometimes favoured by politicians, longer-term strategies use a bottom-up approach, gaining citizens’ support through civic engagement. This column introduces evidence from US actions during the Vietnam War to show that bottom-up approaches are more successful in countering insurgencies than violent, top-down interventions.

Interventions in weakly institutionalised societies have been central to US foreign policy during the past half-century. Military strategies used during foreign interventions have ranged from the deployment of overwhelming firepower to bottom-up initiatives to win hearts and minds through development aid and civic engagement. Discussions about the form that such interventions should take – if they are pursued at all – remain central to US public discourse, most recently in the context of debates about how to best counter Islamic State.

A central goal in US interventions has been to create a state monopoly on violence that will persist after US withdrawal. Achieving this goal requires both a capable state and citizen compliance. “If it is relatively easy to disperse insurgent forces by purely military action… it is impossible to prevent the return… unless the population cooperates”, writes the military scholar David Galula (1964). Top-down approaches to foreign intervention emphasise gaining citizen compliance by making it costly for citizens to oppose the state, whereas bottom-up approaches aim to increase the benefits of supporting the state by providing public goods, economic aid, and political opportunities.

The top-down overwhelming firepower approach is summed up by the Vietnam era adage, “get the people by the balls and their hearts and minds will follow” (Kodosky 2007). This view was famously advocated by Vietnam War General William DePuy, who argued that “the solution in Vietnam is more bombs, more shells, more napalm” (Sheehan 1988). It has also been advanced as an effective way to promote a monopoly on violence by prominent social scientists. Huntington (1968) wrote that air strikes could be used to establish social control and then modernisation would organically follow. Economist and National Security Adviser Walt Rostow argued that countering communism required “a ruthless projection to the peasantry that the central government intends to be the wave of the future”(Milne 2008).

This contrasts with an approach focused on building bottom-up support – “a positive programme of civil assistance must be conducted to eliminate the original cause of the resistance movement” (USMC 1962). James Scott (1985, 2009) cautions that a top-down approach that aims to gain citizens’ cooperation through force is likely to backfire, as citizens have many ways to undermine a state they do not genuinely support, even without going so far as to join an armed rebellion. Moreover, when states try to impose a simplified order from above, their failure to understand local realities and tendencies to disrupt them can lead the scheme to fail (Scott 1998).

These strategies are challenging to study empirically because randomised control trials – viewed as a gold standard of empirical evidence – are typically infeasible. For example, it would not be ethical to randomly assign drone strikes. Instead, we can better understand the impacts of these approaches by examining military strategies that, while not assigned using a random number generator, were deployed in some places but not others for reasons that are uncorrelated with the characteristics of the locations being studied. In such a situation, any differences between locations following the deployment of a military strategy can be attributed to the military actions themselves and not to other underlying distinctions.

The Vietnam War provides a particularly rich setting in which to apply this approach. During the war, quantitative metrics for resource allocation were used to an unprecedented extent, spurred by the systems analysis perspective that Secretary of Defense Robert McNamara brought to the Department of Defense (DoD). McNamara pioneered the use of operations research in the private sector during his tenure in the 1950s as president of Ford Motor Company. Upon being named Secretary of Defense by John F Kennedy, McNamara surrounded himself with ‘Whiz Kid’ analysts from the Rand Corporation, aiming to bring economics and operations research into the DoD. This produced policies and data that offer unique opportunities for estimating causal impacts.

The Air Force received over half of Vietnam wartime appropriations and twice as many tons of explosives were dropped during the war as during WWII, making bombing particularly central to the conflict (Thayer 1975). Our recent paper exploits a newly discovered algorithm component of US bombing strategy in Vietnam that includes discontinuities useful for identifying causal effects (Dell and Querubin 2016). The US used quantitative scoring of the security of Vietnamese population centres to decide which ones to bomb. A Bayesian algorithm combined data from 169 questions on security, political, and economic characteristics into a single hamlet security rating. The output ranged continuously from 1 to 5 (where 1 meant ‘very insecure’ and 5 meant ‘very secure’), but was rounded to the nearest whole number. Due to computational constraints, the continuous scores were not saved or printed from the mainframe computer, and Air Force planners only saw the rounded scores.

Our study identifies the causal impacts of bombing by comparing places just below and above the rounding thresholds. They were similar in all ways prior to bombing, but the hamlets that just barely got rounded down were substantially more likely to be bombed than those just barely rounded up.

Estimates document that the bombing of South Vietnamese population centres backfired, leading more Vietnamese to participate in Viet Cong (VC) military and political activities and increasing VC attacks on troops and civilians. The initial deterioration in security entered the next quarter’s security score, increasing the probability of future bombing and hence leading to sustained increases in VC activity. Moreover, while US intervention aimed to build a strong state and engaged civic society that would provide a bulwark against communism after US withdrawal, bombing instead reduced the probability that the local government collected taxes, decreased access to primary schools, and reduced participation in civic organisations. To the extent that spillover effects of bombing on other locations exist, the impacts tend to go in the same direction as the effects on the locations that were bombed.

Interviews of VC prisoners and defectors provide a potential explanation for why bombing increased VC activity. Grievances against the government – particularly in cases where a civilian family member was killed in US or South Vietnamese attacks – were strong motivators for joining the VC (Denton 1968). Civilian casualties and property damage are plausibly particularly harmful to the trust between government and citizens that underlies an effective social contract.

Comparing Strategies of the Army and Marines

Our study also sheds light on how the top-down approach compares to a more bottom-up strategy. The study exploits the boundary between Military Region I – commanded by the US Marine Corps (USMC) – and Military Region II – commanded by the US Army. The Marines emphasised providing security by embedding soldiers in communities and winning hearts and minds through development programmes (USMC 2009). Their approach was motivated by the view that “in small wars the goal is to gain decisive results with the least application of force… the end aim is the social, economic, and political development of the people” (USMC 1940). In contrast, the Army relied on overwhelming firepower deployed through search and destroy raids (Krepinevich 1986, Long 2016). Evidence points to this difference in counterinsurgency strategies as a central distinction between the Army and Marines. 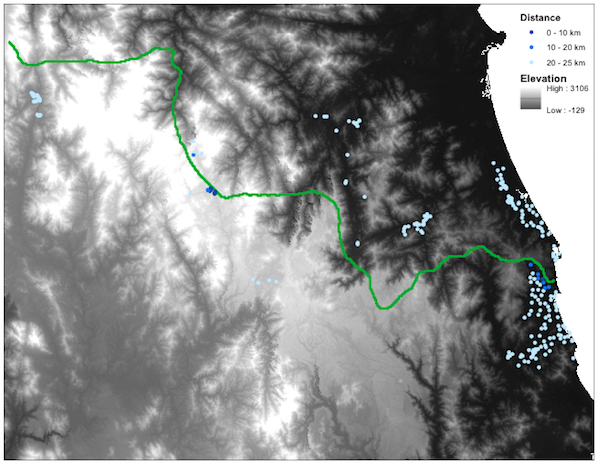 Hamlets just to the USMC side of the boundary were less likely to have a VC presence than those just to the Army side, and public opinion data document that citizens in the USMC region reported less anti-Americanism and more positive attitudes towards all levels of South Vietnamese government than did citizens in the Army region. Pre-period VC attacks, pre-characteristics, and soldier characteristics – including Armed Forces Qualifying Test scores – are all relatively balanced across the boundary, suggesting that the effects are driven by differences in military strategy and not by omitted factors.

These estimates, while highlighting the merits of hearts and minds oriented approaches relative to a more exclusive reliance on overwhelming firepower, do not reveal whether a bottom-up approach is more effective at achieving US objectives than refraining from intervention, a question for which empirical evidence remains sparse.

Understanding whether heavily top-down counterinsurgency strategies are likely to achieve their desired objectives remains policy-relevant. The culture of the US Armed Forces has changed only slowly since Vietnam (Long 2016). Moreover, while targeting has improved significantly, insurgents have responded by embedding themselves more tightly amongst civilians, and it is widely accepted that heavy reliance on air power will lead to civilian casualties. Additionally, politicians continue to advocate a top-down approach. Speaking in Fort Dodge earlier this year, Republican presidential nominee Donald Trump said, “I would bomb the [expletive] out of them [ISIS]. I would just bomb those suckers … I would blow up every single inch”. According to the Democratic nominee Hillary Clinton, speaking in New York  in 2015, “[i]t is time to begin a new phase and intensify our efforts [air strikes] to smash the would-be caliphate”. Lessons drawn from the Vietnam War underscore how intensively focusing on top-down strategies could pose challenges to achieving US objectives, particularly when insurgents are tightly embedded amongst civilians as they are in the Middle East.

Long, A (2016), The Soul of Armies: Counterinsurgency Doctrine and Military Culture in the US and UK. Cornell University Press

Scott J C (1998), Seeing Like a State: How Certain Schemes to Improve the Human Condition Have Failed,Yale University Press

Scott, J C (2009), The Art of Not Being Governed: An Anarchist History of Upland Southeast Asia, Yale University Press