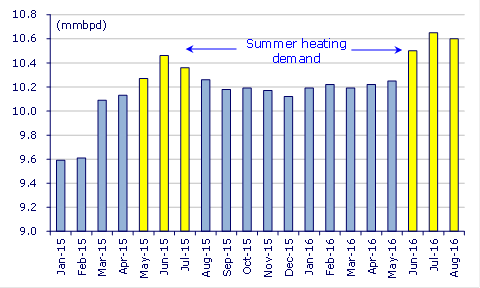 All-in, if the 32.5 mmbpd number is accurate, then OPEC is rolling back to January levels, which is effectively what it had previously suggested it might due. The market response is not surprising, but probably not sustainable either. The devil is in the details and we still do not know how Iran and Libya fit into the equation, or if this is just another proposal that will be dismissed by Iran.

Shale oil economics are an increasingly convincing and credible source of supply growth. Initial production rates have jumped 50 – 100% just in the span of a few years. Spud-to-pipe times have also dropped to 135 days for a pad of three wells, down 13% from 2015. Oil prices sustained in the low $50s is the level that seduces more capital in shale…thus Saudi better be careful what it wishes for. We already expect supplies to flatten out in the US in early 2017 with limited increases in rig activity. A rebirth of activity could prompt a rapid rise in US oil output within 6-months, offsetting OPEC’s efforts once again.

Note – possibly negating the some of the potential impact of this news. Russia, the world’s largest energy exporter, is reportedly on course to pump a post-Soviet record amount of oil in September, adding as much as 400,000 barrels a day to the country’s production.

Who is going to cut? Iran? No. Iraq? No. Libya? No. Nigeria? No. The tiddlers? No. Maybe Kuwait but without the others?

Saudi is nodding at itself in the mirror. It cuts unilaterally or there is no cut.