Yves here. Major financial news outlets, such at the Telegraph yesterday (via Ambrose Evans-Pritchard) and the Financial Times today have reported on a new Bank of International Settlement paper that raises new alarm about China’s debt levels. One reason to take it seriously is that one of its authors, Claudio Borio, was with William White warning about the dangers of housing bubbles in many advanced economies in the runup to the crisis and was ignored.

Some experts have discounted this BIS warning because it raises concerns about China’s overall debt level, which is high by emerging economy standards but not terribly so by those of advanced economies. But its other alarm, about the rapid rise in debt, is harder to ignore since big jumps in borrowings tend to be the result of leveraged speculation and/or unproductive investment.

Steve Keen, one of the few economists to predict the financial crisis, also sees a big increase in debt at a national level from a moderate or high base level as a harbinger of at best future zombification. As he explains in a recent presentation, a mere halt in debt growth in that scenario will produce a crisis.

Lots of China again today. Most of it based on warnings, coming from the BIS, about the country’s financial shenanigans. I’m getting the feeling we have gotten so used to huge and often unprecedented numbers, viewed against the backdrop of an economy that still seems to remain standing, that many don’t know what to make of this anymore.

Ambrose Evans-Pritchard ties the BIS report to Hyman Minsky’s work, which is kind of funny, because our good friend and Minsky adept Steve Keen is the economist who most emphasizes the need to differentiate between public and private debt, in particular because public debt is not a big risk whereas private debt certainly is.

And that happens to be the main topic where people seem to get confused about China. To quote Ambrose: “..Outstanding loans have reached $28 trillion, as much as the commercial banking systems of the US and Japan combined. The scale is enough to threaten a worldwide shock if China ever loses control. Corporate debt alone has reached 171pc of GDP..”

The big Kahuna question then becomes: should Chinese outstanding loans and corporate debt be seen as public debt or private debt, given that the dividing line between state and corporations is as opaque and shifting as it is? Even the BIS looks confused. I’ll address that below. First, here’s Ambrose:

BIS Flashes Red Alert For a Banking Crisis in China

The Bank for International Settlements warned in its quarterly report that China’s “credit to GDP gap” has reached 30.1%, the highest to date and in a different league altogether from any other major country tracked by the institution. It is also significantly higher than the scores in East Asia’s speculative boom on 1997 or in the US subprime bubble before the Lehman crisis.

Studies of earlier banking crises around the world over the last sixty years suggest that any score above ten requires careful monitoring. The credit to GDP gap measures deviations from normal patterns within any one country and therefore strips out cultural differences. It is based on work the US economist Hyman Minsky and has proved to be the best single gauge of banking risk, although the final denouement can often take longer than assumed.

[..] Outstanding loans have reached $28 trillion, as much as the commercial banking systems of the US and Japan combined. The scale is enough to threaten a worldwide shock if China ever loses control. Corporate debt alone has reached 171pc of GDP, and it is this that is keeping global regulators awake at night. The BIS said there are ample reasons to worry about the health of world’s financial system. Zero interest rates and bond purchases by central banks have left markets acutely sensitive to the slightest shift in monetary policy, or even a hint of a shift.

[..] the state’s control of the financial system and limited levels of overseas debt may mitigate against the risk of a banking crisis. In a financial stability report published in June, China’s central bank said lenders would be able to maintain relatively high capital levels even if hit by severe shocks. 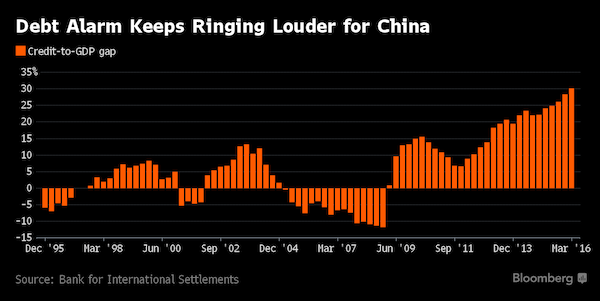 Why am I getting the feeling that the BIS thinks perhaps just this one time ‘things will be different’? If the credit-to-GDP gap (difference with long-term trend) anywhere exceeded 10%, that was a harbinger of the majority of financial crisis. But in China to date, with a 30.1% print, ‘the state’s control of the financial system and limited levels of overseas debt may mitigate against the risk of a banking crisis’. That sounds like someone’s afraid to state the obvious out loud.

If you ask me there’s a loud and clear writing on the Great Wall. But regardless, I didn’t set out to comment on the BIS, I just used that to introduce something else. That is to say, early today, CNBC ran an article on the Chinese property market, seen through the eyes of Donna Kwok, senior China economist at UBS.

Donna sees some light in fast rising home prices (an ‘improvement’..) but also acknowledges they constitute a challenge. She mentions bubbles – she even sees ‘uneven bubbles’, a lovely term, and ‘selective pockets of bubbles’-, but she does seem to understand what’s going on, even if she doesn’t put it in the stark terminology that seems to fit the issue.

CNBC names the article “China Faces Policy Dilemma As Home Prices Jump In GDP Boost,” an ambiguous enough way of putting things. A second title that pops up but has apparently been rejected by the editor is: “Chinese Property Market Is Improving: UBS”. That would indeed have been a bit much. Because calling a bubble an improvement is like tempting the gods, or worse.

I adapted the title to better fit the contents:

Policymakers in China were facing the dilemma of driving growth while preventing the property market from overheating, an economist said Monday as prices in the world’s second largest economy jumped in August. Average new home prices in China’s 70 major cities rose 9.2% in August from a year earlier, accelerating from a 7.9% increase in July, an official survey from the National Bureau of Statistics showed Monday. Home prices rose 1.5% from July. But according to Donna Kwok, senior China economist at UBS, the importance of the property sector to China’s overall economic health, posed a challenge.

It contributes up to one-third of GDP as its effects filter through to related businesses such as heavy industries and raw materials. “On the one hand, they need to temper the signs of froth that we are seeing in the higher-tier cities. On the other hand, they are still having to rely on the (market’s) contribution to headline GDP growth that property investment as the whole—which is still reliant on the lower-tier city recovery—generates…so that 6.5 to 7% annual growth target is still met for this year,” Kwok told CNBC’s “Street Signs.” 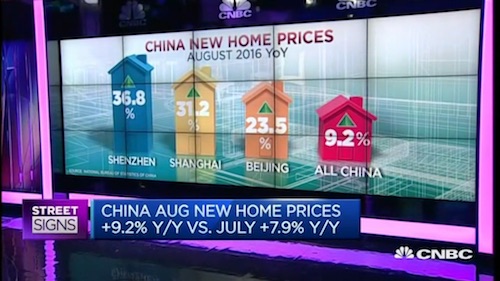 The data showed prices in the first-tier cities of Shanghai and Beijing prices rose 31.2% and 23.5%, respectively. Home prices in the second tier cities of Xiamen and Hefei saw the larges price gains, rising 43.8% and 40.3% respectively, from a year ago. Earlier, the Chinese government introduced measures aimed at boosting home sales to reduce large inventories in an effort to limit an economic slowdown. While the moves have boosted prices in top-tier cities with some spillover in lower-tier cities, there were still concerns of uneven bubbles in the market.

“We are seeing potential signs of selective pockets of bubbles appearing again, especially in tier 1 and tier 2 cities,” Kwok said. The Chinese government in the meantime was rolling out selective cooling measures in these cities to try to even out growth. “If it’s navigated in a such a way that the (positive) spillover to the adjacent tier 3 cities continues to spread further, then maybe that’s where you may get a first or second best outcome resulting,” she added.

To summarize: China can only achieve its 6.5 to 7% annual GDP growth target if the housing bubble(s) persist, and that’s the one thing bubbles never do.

If housing makes up -directly and indirectly, after ‘filtering through’- one third of Chinese GDP, which is officially still growing at more than 6.5%, then the effects of a housing crash in the Middle Kingdom should become obvious. That is, if the property market merely comes to not even a crash but just a standstill, GDP growth will be close to 4%. And that is before we calculate how that in turn will also ‘filter through’, a process that would undoubtedly shave off another percentage point of GDP growth.

So then we’re at 3% growth, and that’s optimistic, that would require just a limited ‘filtering through’. If the Chinese housing sector shrinks or even collapses, and given that there is a huge property bubble -intentionally- being built on top of the latest -recent- bubble, shrinkage is the least that should be expected, then China GDP growth will fall below that 3%.

And arguably down the line even in a best case scenario both GDP growth and GDP -the economy itself-, will flatline if not fall outright. Since China’s entire economic model has been built to depend on growth, negative growth will hammer its economy so hard that the Communist Party will face protests from a billion different corners as its citizens will see their assets crumble in value.

What at some point will discourage Beijing from keeping on keeping blowing more bubbles to replace the ones that deflate, as it has done for years now, is that China desperately seeks for the renminbi/yuan to be a reserve currency, it’s aiming to be included in ‘the’ IMF basket as soon as October 1 this year.

That is not a realistic prospect if and when the currency continues to be used to prop up the economy, housing, unprofitable industries etc. Neither the IMF nor the other reserve currencies in the basket can allow for the addition of the yuan if its actual value is put at risk by trying to deflect the most basic dynamics of markets, not to that extent. And not at that price either.

The Celestial Empire will be forced to choose, but it’s not clear if it either acknowledges, or is willing to make, such a choice. Still, it won’t be able to absorb all private debt and make it public, and still play in the big leagues, even if other major countries and central banks play fast and loose with the system too.