Yves here. These economists are worried about China for the same reason as Steve Keen: the rapid rise in private debt.

China’s debt – in particular its corporate debt – is large by historical and international standards. This column argues that of greater concern is the sharp increase in recent years, and that the vulnerability is heightened by the concentration of this debt in old industries that suffer from overcapacity and weak competitiveness. The authorities appear to be only now taking steps to halt the rise in corporate debt, but as prior episodes of banking crises show, this is unlikely to be enough to avert either a prolonged period of slowing growth or a financial crisis in the medium term.

A few weeks ago, official Chinese media announced that the government will carry out a debt-for-equity swap for the debt held by its state-owned banks in struggling companies, starting as soon as mid-September.1 The aim is to reduce China’s rising corporate debt, which at 171% of GDP is more than twice as high as that in the US. It is a policy the country used back in 1999 amid rising bad debts, but this time around the Chinese economy’s vulnerabilities are much greater.

This matters not only for China but for the rest of the world and global markets too. China contributes roughly one-third of global GDP growth, and the IMF estimates that more than a third of equity and FX price moves in advanced countries are driven by news from China and other emerging markets (IMF 2016a). Prominent examples are the turmoil in global financial markets in August last year and January this year, both of which originated from downside news out of China. And it was no surprise that in its recently released Article IV report on China, the IMF warned Beijing to take concrete and immediate action to address its corporate debt problem (IMF 2016b).

The big question is how close is China to the outbreak of a financial crisis. By referring to early warning indicators and previous episodes of banking crises, we show that China has entered a danger zone. Without bold and swift government action, a crisis seems more likely than not.

A small but growing academic literature has shown that the credit-to-GDP ratio relative to its long-term trend (the so-called ‘credit-to-GDP gap’) is the best single early warning indicator of financial crises (BCBS 2010).2 Credit is broadly defined as credit to the private non-financial sector (households and non-financial corporations) and includes non-bank and foreign funding. Figure 1 shows this measure for a number of advanced and emerging markets at the end of 2015, where we have focused on those countries reporting to the BIS whose credit-to-GDP gap is greater than zero. China tops the list. 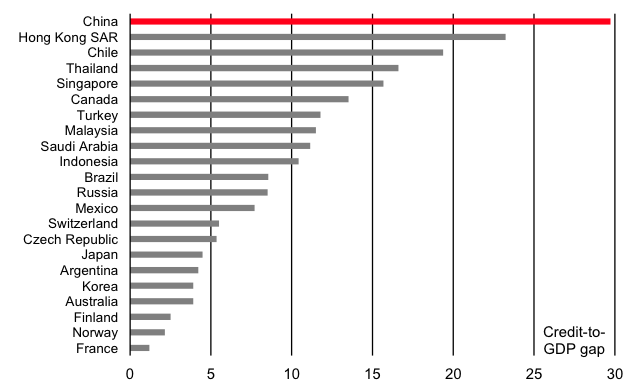 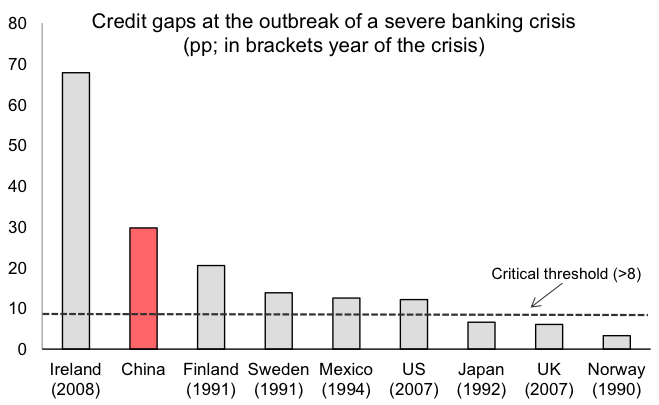 It’s important to add that while the credit-to-GDP ratio is a good predictor of banking crises, it does not pin down the exact timing. The ratio can remain high for years before a crisis actually takes hold – if at all. Figure 3 shows the evolution of the indicator in the 32 quarters before the outbreak of a crisis for our sample of severe financial crises. From the figure, we see the build-up in the credit-to-GDP gap ahead of the crisis, but in some cases it eases (albeit from high levels) before the crisis actually starts and so it is hard to identify a trigger point.

Figure 3 Evolution of the credit gap ahead of a crisis 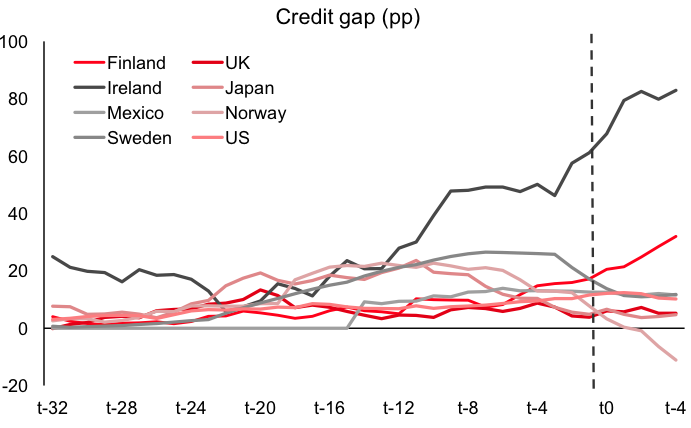 Although predicting the exact timing of a crisis is impossible, other indicators signal that vulnerabilities in the financial sector are mounting and are close to critical thresholds. First, debt service ratios (the ratio of interest payments plus amortisations to income) are 20% higher than the ratio in the US at the onset of the 2007/8 subprime crisis. Second, house prices have been rising very strongly, fuelled by a frenzy of borrowing, and this increases the exposure of the economy to a sudden drop in real estate prices. Third, a big chunk of credit goes to the old economy, where profitability and cash flows are slowing.

Not surprisingly, amid industrial overcapacity and a slowing economy, non-performing loans (NPLs) of the commercial banking sector are rising. Officially, they amount to just 1.7% of total loans.4 But, these figures likely substantially underestimate the scale of bad debts. Unlike the vast majority of countries in the world, loans that are 90 days past due are not considered non-performing by China if the expected market value of collateral secured on the loan is higher than the loan itself. If we include so-called special mention loans (loans which are overdue but not yet considered non-performing), then the ratio would increase to 5.8% of outstanding bank loans, up from 3.5% at the start of 2014. And, the actual bad loans figure could be much higher, especially if one takes into account the ‘evergreening’ practice of rolling over debt where new credit is used to service existing loans.

Assuming the ‘true’ level of NPLs is 5.8%, and given total outstanding bank loans are $12.3 trillion, then potential bad debts would equal $0.7 trillion, or 6.5% of China’s GDP, which is substantial for an emerging economy.

As previous episodes of banking crises show, the sharp build-up of credit in the Chinese economy suggests a very high probability of a crisis in the next few years. Whether a crash can be avoided or not depends critically on the policy response of the Chinese government. In the three major banking crises that hit the country in the 1980s and 1990s, the one-party state was extremely willing to absorb part of the private sector losses. It now needs to act quickly to reduce corporate debt, strengthen bank balance sheets, and move the economy away from credit-fuelled investment in the ‘old economy’ and towards consumption. Debt-for-equity swaps, bank recapitalisations and the establishment of a market for the NPLs are all options on the table. Such a restructuring process of the banking system would result in a period of slower growth due to the credit contraction, but it would lead to a more sustainable growth model in the medium term. If, instead, the government continues to promote rampant credit growth, forcing banks to keep alive struggling state-owned enterprises, misallocating resources and deferring the necessary structural rebalancing, then a crash would seem to be unavoidable.

[2] Following Borio and Lowe (2002), we compute the long-term trend of the quarterly credit-to-GDP ratio using a one-sided HP filter with a smoothing parameter of 400,000. The trend is estimated recursively; for example, the trend at time t is computed using credit-to-GDP data up to and including time t. The trend is computed using a minimum of 10 years (40 quarters) of data.

[4] According to World Bank figures, the world average was 4.3% in 2015, although there are differences in classification of NPLs across countries.