No matter how bad things are at CalPERS, the giant pension fund seems determined to make them worse.

This Thursday, November 3, the California State Personnel Board is set to approve changes to the job description of CalPERS’ Chief Actuary that are depicted as minor but are anything but. We get to the CalPERS job description shortly, but as Purdue’s mathematics department describes the terrain:

An actuary is a business professional who analyzes the financial consequences of risk. Actuaries use mathematics, statistics, and financial theory to study uncertain future events, especially those of concern to insurance and pension programs.

The proposed changes both amount to a violation of the California Constitution by attempting to end the required role of the board in policy-making, and separately so far reducing the minimum qualifications for the job that they will be lower than that for the most junior actuaries now employed at CalPERS. Needless to say, that makes a mockery of the claim that CalPERS needs to dumb down the job description so severely to fill the post. CalPERS could promote someone from inside by relaxing the requirements less or not at all.

One has to assume that the motivation for allowing a person who would be deemed to be grossly unqualified under current rules to be hired in the Chief Actuary is that the new CEO, Marcie Frost, has someone specific she’d like to bring in. The fact that Frost herself does not have a college degree and certainly does not have the mathematical chops to evaluate an actuary’s professional competence certainly looks like she is giving personal loyalty far too much weight in a role where analytical rigor and professionalism are of paramount importance.

This move troublingly resembles CalPERS’ decision to hire a similarly unqualified party, Robert Klausner, in another important role, that of fiduciary counsel. Recall that Klausner was not a member of the California bar, yet in public board sessions, was giving advice on California law matters such as its Public Records Act. As we pointed out, his advice was contrary to statute. To make matters worse, Klausner had a long track record of being involved in pay-to-play scandals and of telling clients what they wanted to hear, regardless of whether he could come up with a sound legal basis for validating their actions. As California attorney Karl Olson wrote of Klausner:

This isn’t a case of the fox guarding the henhouse; this may be a case of CalPERS going across the country to hire a fox who specialized in building henhouses with no gates.

But what could possibly be foxy about the historically dull green-eyeshade role of Chief Actuary?

Recall that the biggest controversy that CalPERS is facing now, and one that is not going away any time soon, is its underfunding problem and its refusal to cut its return assumptions. CalPERS’ just-retired former Chief Actuary, Alan Milligan, repeatedly stated that he thought the pension fund needed to lower its return target, and repeated that view in his final appearances before the board in August and September. Given the recent salvo of articles excoriating CalPERS for its refusal to reduce its return targets save on a very attenuated basis that many regard as unrealistic, CalPERS must be relieved that journalists were too inattentive to pick up on the fact that the agency was disregarding the advice of its own designated risk expert. No doubt the agency is keen to get an actuary in place that won’t take positions that could make its hard-to-defend posture even more untenable.

Now let us address the particulars of CalPERS’ chicanery with its Chief Actuary job search.

The Chief Actuary is such an important role that until the board decided to quit doing its job and rubber stamp pretty much everything staff wanted to do, it was one of four direct reports to the board. Reducing the number of direct reports to one has substantially reduced the board’s power. If it was unhappy with the activities of staff, it could threaten to fire one of the direct reports other than the CEO, which gave it more surgical ways to intervene. Now it has only the nuclear option of defenestrating the CEO.

The Chief Actuary, indeed all the actuary positions at CalPERS, is a job classification that is specific to CalPERS. From a letter from an Baldwin, Chief Personnel Management Division, to the Personnel Board from the document at the end of the post:

The Chief Actuary is appointed to this single-incumbent, statutory position and serves as a key member of the CalPERS Executive Management team, the incumbent provides guidance on all actuarial issues facing CalPERS, including actuarial investigations and valuations, rate structure, health benefits and reserve funds. The Chief Actuary promotes the sound and secure operation of CalPERS enterprises through the oversight of all functions within the ACTO [Actuarial Office], and is responsible for the evaluation, development, and implementation of actuarial policies and procedures.

The revisions to the proposed role violate the California constitution by eliminating any reporting relationship between the board and the Chief Actuary. On page 4 of the document below: 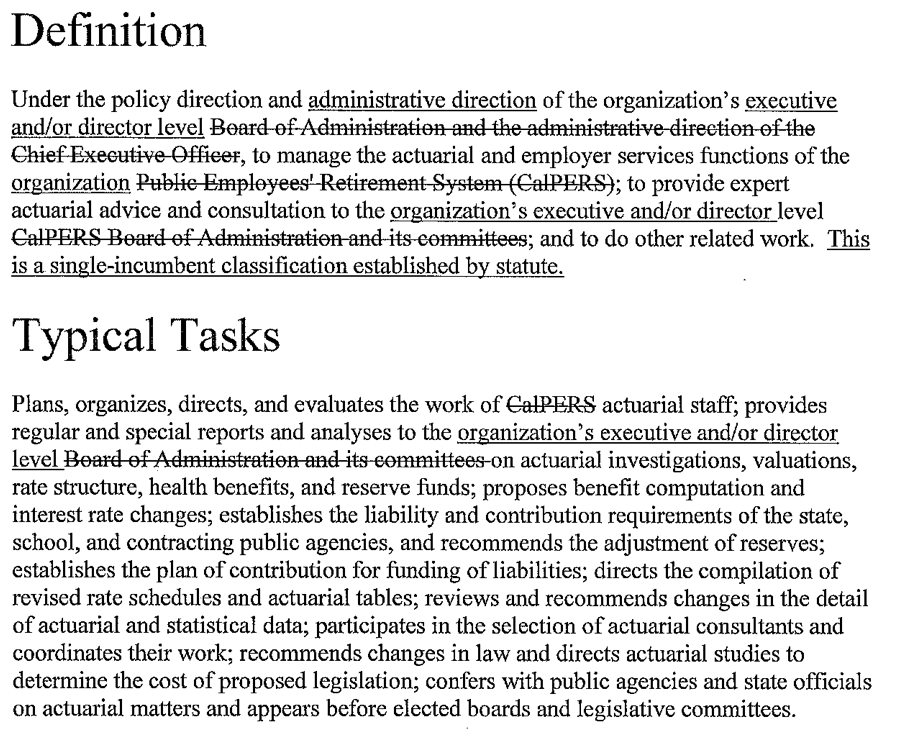 First, it’s disturbing to see the lengths to which the State Personnel Board is willing to collude with CalPERS in disguising the fact that this job classification applies ONLY to CalPERS. By eliminating any reference to CalPERS, unexperienced investigators would mistakenly assumed that the greatly-watered down job requirements apply to all state agencies that have actuarial groups and thus have a senior actuary in charge, such as CalSTRS and the State Department of Insurance. The very fact of this cover-up alone is a sign that CalPERS knows it is up to no good and is desperate to cover its tracks.

Second, look at the first sentence of the first paragraph as it is proposed to read (emphasis ours):

This is an express violation of the California Constitution. Article XVI, section 17(e) states:

Notice the use of “exclusive and “sole and exclusive.” At a bare minimum, the board needs to retain policy oversight, but even that is being stripped away in the new job description. The board will have absolutely nada to do with the actuarial function. Also bear in mind that the changes in the proposed language, at least as far as I can tell from looking at recent board meetings, were never reviewed or approved by the board. This is a naked power grab by staff relying on long-standing complacency of CalPERS’ board.

Requirements include examinations, an e-Learning course, validation of educational experiences outside the SOA Education system (VEE), and a professionalism seminar.

It is not a professional organization. One can be a member without satisfying any professional credentialing requirements. For instance, one can become a member via being a member of the “Conference of Consulting Actuaries” which in turn allows for “Membership for NonSOA/CAS Credentialed Actuaries”

All actuaries not credentialed by the Society of Actuaries or the Casualty Actuarial Society are required to sign off on a form acknowledging professional awareness of the Qualification Standards and professionalism for actuaries prior to processing his/her application (required by the International Actuarial Association).

In other words, without even looking hard, there is a route to become a member of the American Academy of Actuaries by saying you’ve heard about actuarial professional ethics. You don’t even have to say you believe in them, just that you know they exist! Although there is a continuing education requirement for the Conference of Consulting Actuaries, if you click through, you can see it is required “to retain the status of FCA or ACA” meaning Fellow or Associate, not a mere “Member”.

Needless to say, it would be plenty demotivating to CalPERS’ existing staff of actuaries to have a new boss parachuted in above them who hadn’t gone through the sort of minimum professional accreditation they were required to meet. And it begs the question as to why CalPERS’ staff is so desperate to consider candidates that have not been subjected to a basic requirement of passing the Society of Actuaries’ exams. Would you ever consider using an attorney, even for informal advice, who had never passed a bar exam? Yet CalPERS and the California Department of Human Resources are about to put in place a job description that would let someone that unqualified in actuarial space take the helm at CalPERS.

With the vote on this dangerous change set to take place on Thursday, this plot is too far advanced for the usual Naked Capitalism reader route of writing upset missives to CalPERS board members, particularly the elected members who have reason to fear the wrath of voters, to have any effect. I hope you’ll forward this post to news organizations and ask them to look into this pronto, since this story is time sensitive.

Here are some candidates, but feel free to write others (please add helpful ideas in comments, particularly how to contact any talk radio or TV hosts who might take up this story):

Jack Dolan (jack.dolan@latimes.com) at the Los Angeles Times. I have mixed feelings about putting Dolan onto this, since his last story on CalPERS was seriously distorted (his report grossly exaggerated the cost of cost of allowing “badges” as in mainly prison guards and state highway officers, to retire early and tried pinning CalPERS underfunding on that, when it is due to not continuing to fund the system when it appeared to be overfunded in the dot-com era, and the losses it took in the financial crisis from which it has not fully recovered). However, with CalPERS in the cross-hairs of critics, it needs to work even harder at being above reproach instead of making itself vulnerable to fully-deserved attacks. And this latest development would certainly fit with the dim view he has of the system. However, he may only do longer-form stories and something faster-turnanround may not suit his schedule.

John Gittelson at Bloomberg (johngitt@bloomberg.net). He’s an LA-based asset management reporter at Bloomberg; he’s pinged me in the past about past CalPERS stories, always an encouraging sign.