This is Naked Capitalism fundraising week. 494 donors have already invested in our efforts to combat corruption and predatory conduct, particularly in the financial realm. Please join us and participate via our donation page, which shows how to give via check, credit card, debit card, or PayPal. Read about why we’re doing this fundraiser, what we’ve accomplished in the last year, and our second goal, meetups and travel. 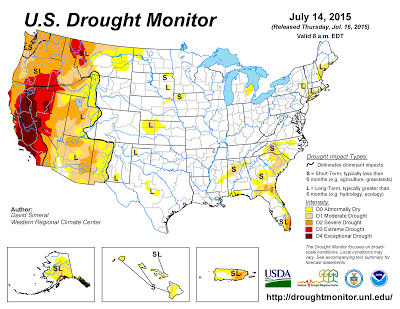 Drought status in the U.S. as of 2015. Note the color-coded legend in the lower-right portion of the graphic (source; click to enlarge)

I’ve written in the past about two of the most climate-vulnerable regions of the U.S., Florida and the American Southwest. (A third region, the Pacific Northwest, is vulnerable, but to a non-climate event, a magnitude 9.0 mega-earthquake.) Here I want to look again to the problems of California and the Southwest.

The report is from NASA; the write-up is from EcoWatch (my emphasis):

“Historically, megadroughts were extremely rare phenomena occurring only once or twice per millennium,” the report states. “According to our analysis of modeled responses to increased GHGs, these events could become commonplace if climate change goes unabated.”

Rising temperatures will combine with decreased rainfall in the Southwest to create droughts that will be worse than the historic “Dust Bowl” of the 20th century and last far longer. The Dust Bowl lasted no longer than eight years, and affected 100 million acres around the Texas and Oklahoma panhandles and adjacent lands in Kansas, Colorado and New Mexico. Dust storms swept through large swaths of former farmland, depositing dust as far east as Chicago, New York and Washington. It is estimated that more than half a million people were made homeless, and some 3.5 million Dust Bowl refugees migrated west, in hopes of finding work.

First, a megadrought lasting decades is a once- or twice-in-a-millennium event. That’s once every 500 to 1000 years. The American Southeast had two “once in 500 year” storms in the last two years, and that following “Superstorm Sandy” in 2012. Obviously the frequency is changing, perhaps exponentially.

In the Southwest that megadrought could last for the next few decades. I did a major piece here — “California Drought, the “Bigger Water Crisis” & the Consumer Economy” — with a breakdown of elements that went into the current multi-year drought, and a look at the Colorado River basin and its condition. Some of the bottom lines include these:

▪ The social contract will break in California and the rest of the Southwest (and don’t forget Mexico, which also has water rights from the Colorado and a reason to contest them). This will occur even if the fastest, man-on-the-moon–style conversion to renewables is attempted starting tomorrow.

This means, the very very rich will take the best for themselves and leave the rest of us to marinate in the consequences — to hang, in other words. (For a French-Saudi example of that, read this. Typical “the rich are always entitled” behavior.) This means war between the industries, regions, classes. The rich didn’t get where they are, don’t stay where they are, by surrender.

▪ Government will have to decide between the wealthy and the citizenry. How do you expect that to go?

▪ Government dithering and the increase in social conflict will delay real solutions until a wake-up moment. Then the real market will kick in — the market for agricultural land and the market for urban property. Both will start to decline in absolute value.

If there’s a mass awareness moment when all of a sudden people in and out of the Southwest “get it,” those markets will collapse. Hedge funds will sell their interests in California agriculture as bad investments; urban populations will level, then shrink; the fountains in Las Vegas and the golf courses in Scottsdale will go brown and dry, collapsing those populations and economies as well.

Second, about the time frame, obviously there’s a possibility of a once-in-500-year multi-seasonal rainfall, but that’s not expected, to say the least. Will the region recover from this drought? If it lasts two decades, I think its livability, its habitability is finished. And when people figure that out, they’ll move, perhaps in droves, depending on whether something triggers panic-selling.

That is, the area will be livable, but by a lifestyle without modern infrastructure, since it takes a certain critical mass of population and wealth (economic activity) to keep modern infrastructure going. Think of the infrastructure in small towns, where people are leaving and populations are declining, versus the more viable lifestyle available to vigorous larger towns and cities, where there are jobs. Now add multi-decade drought to those small-town lives.

Where will the jobs be if Los Angeles, San Diego, Phoenix and Las Vegas have no water? Where will California agriculture be if farms go dry? And finally, consider the Dust Bowl again. As many as 3.5 million refugees migrated west, to California. Where will those refugees go if they’re forced to leave California, the heart of the dry zone and pressed against the ocean? Utah? Unlikely. North perhaps, swamping the Pacific Northwest with people, or given a slower migration, back across the Rockies.

Civilizations have risen and died in the American Southwest. During the last megadrought, the Anasazi, or Pueblo culture, which was extensive in territory, completely disappeared. When the Mormons arrived in Utah, the Anasazi were identifiable only by their relics. EcoWatch again:

Megadroughts of 35 years are currently rare and have led to severe upheaval in the past. There’s evidence that the Pueblo people of what is now the south-west US were forced to abandon settlements in the 13th century due to a lengthy drought.

For the U.S. to compress and recede to a more habitable center while aggressively converting to zero-carbon is not the worst outcome in the world. Far from it, in fact.

There Is a Solution — A Zero Carbon Economy

I’ve been writing for a few years that there is likely a five-to-ten year window, and only that, in which we could start a crash program toward a zero-carbon economy, what I like to call the Stop Now plan, and what others call a WWII-style mobilization or “man on the moon”-style program. That’s actually good news — that there’s still time — and I still believe it.

If we start in the first term of the next president, we can mitigate most of the disaster nationally, though maybe not all of it regionally. From the Guardian’s report of the same NASA study:

The new report does proffer a crumb of hope – if greenhouse gas emissions are radically cut then the risk of megadrought will reduce by half, giving a roughly 50:50 chance that a multi-decade stretch of below-average rainfall would occur this century.

But the research found that the emissions cuts would have to be far steeper than those agreed to by nations in Paris last year, where a 2C limit on warming was pledged.

“We would need a much more aggressive approach than proposed at Paris, it’s not too late to do this but the train is leaving the station as we speak,” [Toby Ault, a scientist at Cornell University and lead author of the study,] said.

And one last point. The next president will be the last one with a clear chance to turn the ship. It looks like Hillary Clinton, barring the unforeseen, will be that president. She recently gave a very aggressive climate speech, with Al Gore at her side. Can she be brought to see, not just the extremity of the situation, but the extremity of the actions needed to address it? The jury is out on that, and that’s also the good news.

As long as there’s time on the clock, there’s hope. I don’t expect you or I will influence this election; the country is too far down that road, and perhaps not all the influential wild cards have been played. But we can influence the winner afterward, so long as that winner has a modicum of sense and so long as the evidence — megastorms, megadroughts — is incontrovertibly in front of her.