This is Naked Capitalism fundraising week. 497 donors have already invested in our efforts to combat corruption and predatory conduct, particularly in the financial realm. Please join us and participate via our donation page, which shows how to give via check, credit card, debit card, or PayPal. Read about why we’re doing this fundraiser, what we’ve accomplished in the last year, and our second goal, meetups and travel.

People with autism make more logical decisions Business Insider (furzy). And why would one assume not?

Twitter suitors vanish as Salesforce rules out bid Financial Times. I’d rather not have Twitter messed up by a new owner.

Clinton: If we were China, Pacific would be “American Sea” MacroBusiness

The City exodus is already happening. It just doesn’t look like you expect it to Telegraph. Vlade: “Of course, voters in Midlands/North England couldn’t give a toss if a number of people from SouthEast lose well paid jobs. At least until such a time that the London tax take starts to erode significantly (and that tax base is mostly on the back of the middle class well paid jobs, not a few high paid bankers who have ways and means of avoiding it anyways), and the unemployment starts going up.”

Pentagon Video Warns of “Unavoidable” Dystopian Future for World’s Biggest Cities Intercept (Chuck L). Wowsers. They must be desperate for budget. Did they miss that NYC is being gentrified to the degree that poor people are being pushed further and further away by the rents? And that it’s pretty hard to have “subterranean labyrinths” when it takes jackhammers to get into the schist? Now 50+ years out, all bets are off (re urban centers falling apart due to general collapse…but we’re likely to see big populations declines with that, not teeming hordes)

Podesta to Tom Steyer in leaked email: ‘I didn’t expect to get f—ed by you’ The Hill

On WikiLeaks, Journalism, and Privacy: Reporting on the Podesta Archive Is an Easy Call Glenn Greenwald, Intercept (resilc)

Senate Update: Clinton Is Surging, But Down-Ballot Democrats Are Losing Ground FiveThirtyEight (resilc). As Lambert and we predicted. Clinton is sucking all the money out of the down-ticket Dem races, while Republican billionaires are targeting them.

Roaming Charges: a Wikileak is a Terrible Thing to Waste Counterpunch (J-LS)

Where Do Clinton and Trump Have the Most Upside? FiveThirtyEight. Resilc: “Ries to my chats and Trump signs in Vermont and western Mass this summah.”

Why Google News is adding a ‘Fact Check’ label Christian Science Monitor. Lambert: “I can’t think of a worse idea.”

Rethinking automatic insurance coverage for preventive health care Minnesota Public Radio News. Phil U: “​URGH someone needs to take the ACA out back and shoot it.”

The governor of Oklahoma created ‘Oilfield Prayer Day’ in hopes of saving the state’s oil and gas industry Business Insider (furzy). Only in America…

A flood disaster in N.C.: Satellite photos before and after Hurricane Matthew Washington Post (Lulu)

The Cheap Airfare Party Is About to End Bloomberg. “About to”? I had major sticker shock when I bought my Thanksgiving and Christmas tickets.

The American Dream: Rich are fearful for its survival, but poor still believe CNN (Dan K)

Antidote du jour. John Z: “My daughter, Lynn, took the attached video clip of a praying mantis in her yard. While filming, the insect turned around and looked straight at her. She later found out that praying mantises have ultrasound hearing so apparently the bug heard her and turned to check her out. The still picture is from the video clip.” 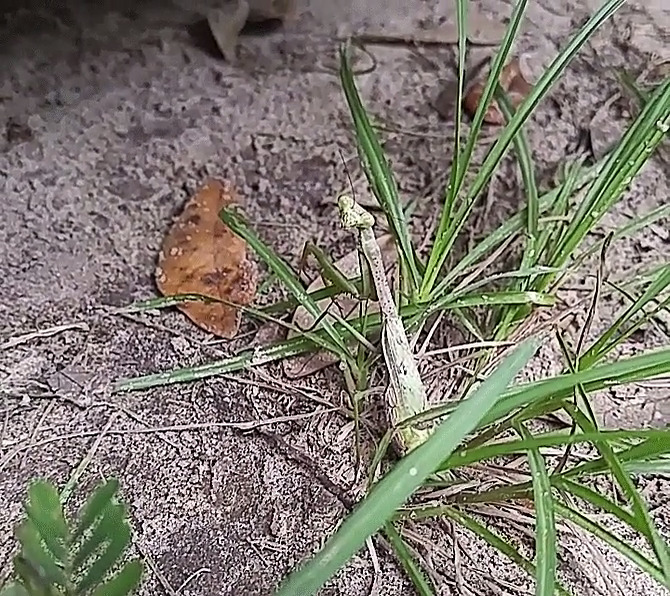