This is Naked Capitalism fundraising week. 1320 donors have already invested in our efforts to combat corruption and predatory conduct, particularly in financial realm. Please join us and participate via our Tip Jar, which shows how to give via check, credit card, debit card, or PayPal. Read about why we’re doing this fundraiser, what we’ve accomplished in the last year, and our fifth goal, more original reporting.

Yves here. Many experts and commentators are trying to get a grip on the backlash against what seemed to be an irrevocable march towards an increasingly globalized world. Perhaps they’ve simply reached the limits of a policy trilemma that Dani Rodrik first articulated in 2007:

….democracy, national sovereignty and global economic integration are mutually incompatible: we can combine any two of the three, but never have all three simultaneously and in full.

Readers have taken to quoting Yeats’ The Second Coming (“….the center cannot hold/Mere anarchy is loosed upon the world”) but stop short of the last lines:

And what rough beast, its hour come round at last,
Slouches towards Bethlehem to be born?

Or more tersely and less elegantly by Antonio Gramsci:

The old is dying and the new cannot be born. In this interregnum there arises a great diversity of morbid symptoms.

This article attempts to define the new political impulse in terms of rage. While readers no doubt will take issue with the frame (rage implies irrationality, and one can argue that the anger that drives some key actors and movements is well warranted; repeatedly being on the short end of economic deals and then being pandered to on top of that will produce a response).

The “rage” meme nevertheless reminds me of one of my favorite videos:

And even if you don’t agree with all of the items on the various lists below, they are nevertheless what we in consulting call a forcing device: far enough along to serve as good grist for reflection and refinement. 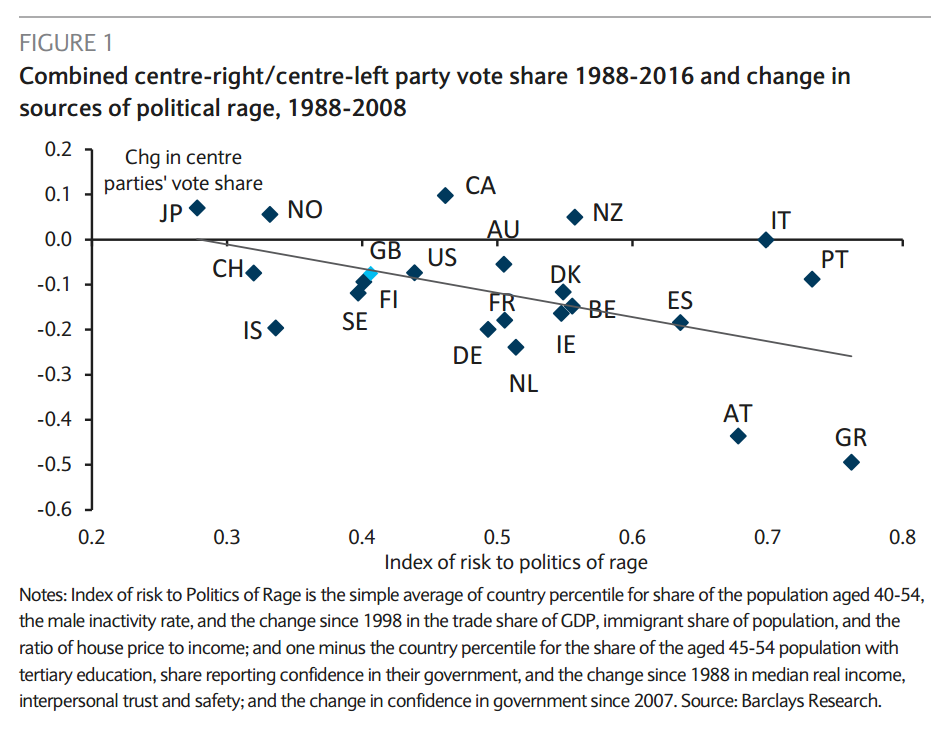 Rage is all the rage these days. Global media have taken notice of “voter rage” directed at the centre-right/centre-left establishment. What appears less well understood is that this voter rebellion, “the Politics of Rage”, spans nearly all advanced economies, has been taking place for more than a decade, is unparalleled in modern history, and is deeply entrenched. This is not just about Brexit or the US election; it is about a global political movement.

More troubling, from a market perspective, is that its roots may be misunderstood. Misperceptions in politics tend to lead to volatile surprises, such as Brexit, or to misdiagnoses and to policy mis-prescriptions that imply even worse outcomes for asset prices.

Policymakers have focused on income inequality as the primary driver of the Politics of Rage. Although we cannot reject the thesis, we find little support for it in the data. Others have focused on anti-globalisation movements as the main driver. Our analysis agrees, but in results that may surprise some; we find that it is neither the most important source of rage nor as economically irrational as some have suggested.

We find that a deeper cause is a perception among “ordinary citizens” that political and institutional “elites” do not accurately represent their preferences amid a growing cultural and economic divide. These frustrations appear to be validated, with many caveats, by the data: median earners in advanced economies seem to have been the relative losers of globalisation, both within their own countries and relative to their emerging market peers.

Voter anger may be analogous to the Greek hero Achilles’ terrible rage, not for having received less than King Agamemnon, but for the perceived injustice in the manner in which Agamemnon distributed the spoils of battle. Achilles’ wrath cost the Greeks – and ultimately Achilles – dearly, as the Politics of Rage may cost global output. But it was not because Achilles’ sense of justice was in error.

Our findings have mostly strategic implications for asset markets, but they are not happy. Our research seems to support the late Harvard political scientist Samuel Huntington’s forecast of continued political upheaval and highlights the trilemma of incompatibility among democracy, sovereignty and globalisation postulated by the economist Dani Rodrik. The Politics of Rage has been around longer than many realise and likely will remain for the foreseeable future. Despite this long arc, our findings also are highly relevant to near-term event risks.

The report is robust and detailed, but the issues and conclusions are framed in brief in the Executive Summary and on “Rage in a page”, below. 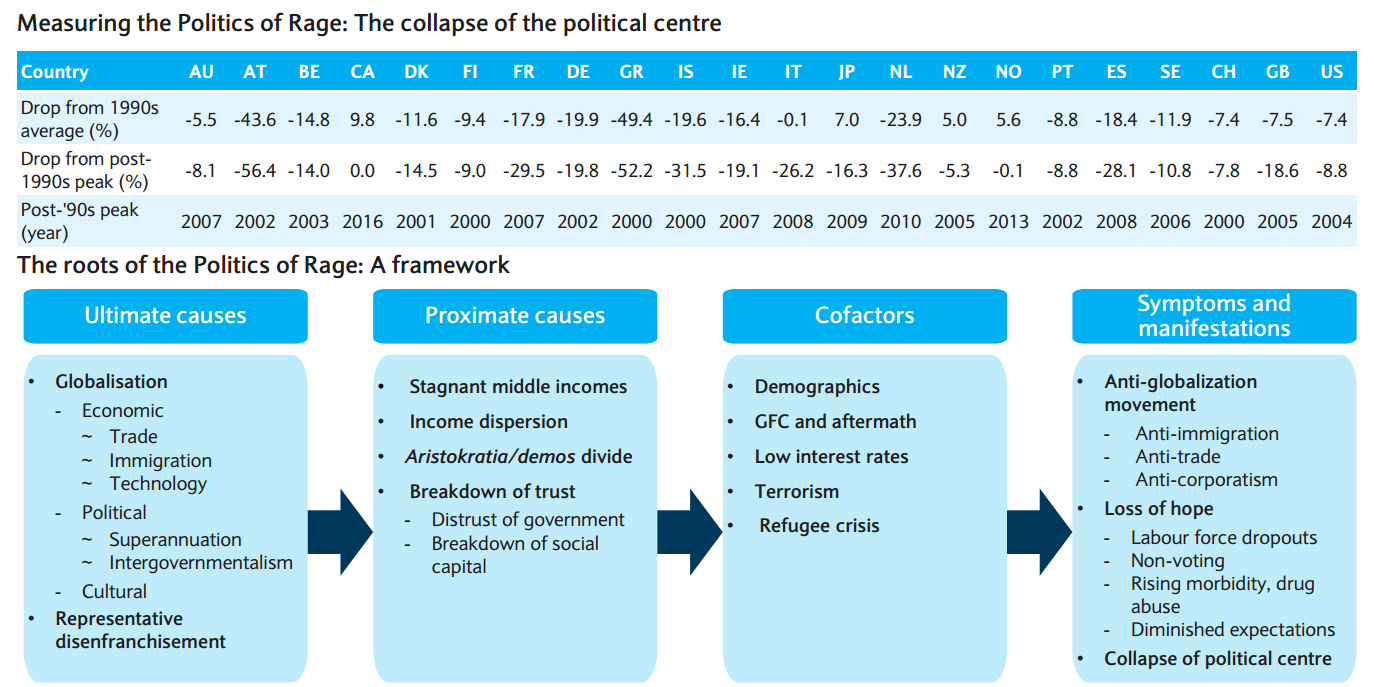 Prospects for the Politics of Rage

• Its roots run deeply through and across countries; Brexit was no exception

The Policies of Rage

• Trade: Restrictions on the free movement of goods and services

Effects of the Policies of Rage

• Direct de-globalisation: Restrictions on the free movement of goods and services, labour and capital

• Indirect de-globalization: Greater difficulty achieving harmonisation of international rules, standards and taxation  Supranational entities like the EU and intergovernmental agreements like the Basel Accords and WTO likely will be at greater risk of dissolution

• Redistribution of income: Even without explicit policies to redistribute, de-globalisation likely will lead to a greater labour share of aggregate income

Implications of the Politics of Rage

• Fiscal policy likely is ambiguous for advanced economies, but more expansionary for EM

• Global savings should fall, and precipitating a rise in real interest rates to equate investment, but the pattern should shift, ironically, to decrease advanced economy current account balances relative to EM

• Global nominal interest rates should rise, but more so in core economies; dispersion should increase

• G10 FX should outperform EM FX, but dispersion within each group should increase; JPY is a clear outperformer, EM and Europe are clear underperformers

• Slower global demand should dominate the outlook for commodity prices

• Equities and credit likely face a poor outlook in aggregate due to slower revenue growth and margin compression, but wide sectoral and country dispersion is likely

• “Fat tails” are likely as markets learn about the Politics of Rage, but a long-run increase in volatility is unlikely

I can gainsay none of that and will only note that it is the commodity-intensive Western nations that have survived the rise of rage best. But as that windfall passes so too will its political blessings.

Australia therefore has an opportunity to get ahead of this trend before it forces itself into our politics permanently, but we, sadly, are stuck with Do-nothing Malcolm and his merry band of real estate rentiers, ensuring that rage will grow.