This is Naked Capitalism fundraising week. 604 donors have already invested in our efforts to combat corruption and predatory conduct, particularly in the financial realm. Please join us and participate via our donation page, which shows how to give via check, credit card, debit card, or PayPal. Read about why we’re doing this fundraiser, what we’ve accomplished in the last year, and our third goal, well-deserved bonuses for our guest writers.

Exceptionally weak global trade growth over recent years has presented a puzzle to academics and policymakers alike.1 Annual world import growth has fallen below its long-run average since mid-2011 and remained there since, representing the longest period of below-trend growth in nearly half a century. Even more importantly, the link between global production and trade appears to have changed.2 While global trade grew at approximately twice the rate of global GDP prior to the Global Crisis, the share of trade in global GDP has discontinued its strong upward trend and largely stagnated over recent years (Figure 1). 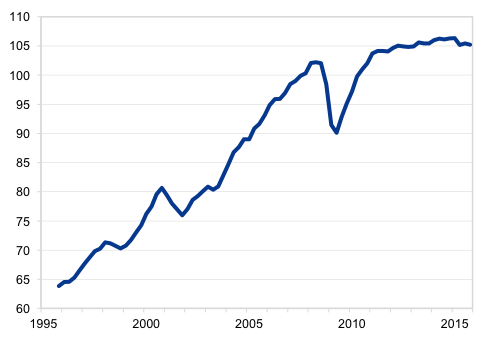 Pre-crisis trade elasticities have, however, also shown considerable variation over time, with the ratio of global import to GDP growth fluctuating significantly prior to the Great Recession (Figure 2). In fact, the growth ratio peaked in the mid-1990s, and has gradually declined thereafter.3 A recent study by an expert network of European central banks4 finds that the decline in this ratio is primarily due to structural factors, which had temporarily lifted the income elasticity of trade significantly above unity (IRC Task Force 2016). More recently, these push factors have largely run their course and thus provide less support to trade growth. From this perspective, the current environment therefore reflects a normalisation of the trade elasticity towards its long-run value of unity. 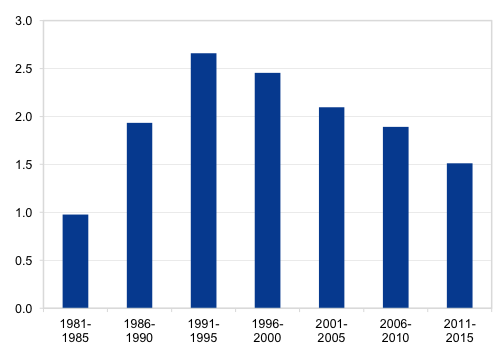 Specifically, the study shows that the change in the global trade-income relationship between the pre-crisis period and more recent years is driven by both compositional as well as structural effects. The former are not necessarily structural and can reverse over the medium term. The latter, on the other hand, alter the fundamental relationship between trade and economic activity also at the country level. These two factors each contribute roughly half to the overall decline in the trade elasticity, respectively.

Among compositional effects, the geographical shift in economic activity has played a key role. The past decade was characterised by significant changes in the relative contributions of advanced and emerging economies to global growth and trade, with the contribution of the latter in global GDP increasing considerably (Figure 3). Since advanced economies typically exhibit higher trade elasticities than their emerging market counterparts, their decreasing importance in the global economy has implications for the global trade elasticity (Slopek 2015). In fact, a simple decomposition exercise shows that up to half of the decline in the global trade elasticity is attributed to the relative demand shift from advanced to emerging economies. The second compositional factor is linked to shifts in activity to demand components that are less trade-intensive (Bussière et al. 2013). In particular, investment has been weak after the Global Crisis among advanced countries, also contributing to the global trade weakness. 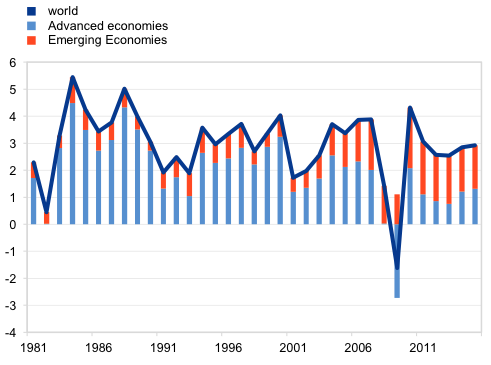 At the same time, several structural developments have additionally lowered trade elasticities at the individual country level. In particular, the expansion of global value chains had significantly supported gross trade growth in the 1990s and early 2000s, when intermediate components were increasingly shipped multiple times between economies along their production chains. Current indicators however suggest that the sharp rise in global value chains has stalled and possibly even reversed after 2011 (Figure 4), removing an important source of global trade growth. While the underlying reasons are manifold, anecdotal evidence points to expanding protectionist measures among the drivers of the global value chain slowdown. For instance, a recent ECB survey of large Eurozone firms found that two thirds of respondents list local content requirements as one of the main reasons for relocating production outside Europe (ECB, 2016). Local content requirements induce firms to increasingly source and produce in their export markets, which in turn substitute for earlier trade flows. 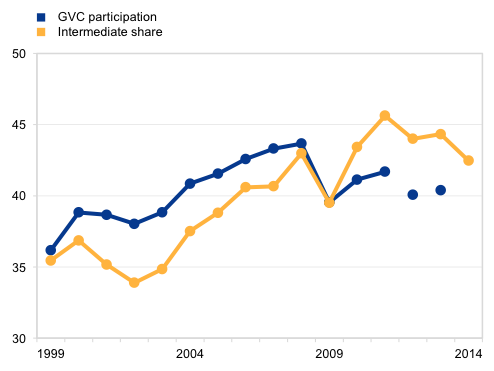 Notes: Both measures exclude energy-related trade. The intermediate share is mean-variance adjusted to that of the GVC participation measure. The GVC measure is based on Borin and Mancini (2015) and extended for 2012-2013 with changes in the share of the intermediate goods indicator.

Another structural factor relates to financial frictions. In particular, financial development and better access to capital markets have been seen as an important factor in building up export capacities (Kletzer and Bardhan 1987, Beck 2002). While the empirical literature confirms the positive impact of financial development on the level of trade openness, recent analysis suggests that the marginal effect of finance on trade decreases considerably with the size of the financial sector (Gächter and Gkrintzalis 2016). The findings point to a threshold – estimated when private sector credit reaches around 100% of GDP – where further financial deepening is no longer associated with increasing trade relative to GDP. These non-linearities may also have played a non-negligible role in the global trade slowdown, as many countries have experienced substantial financial sector development in the two decades prior to the crisis. As financial sectors have matured, however, with many countries approaching the estimated threshold, the support provided by financial deepening for further trade growth has waned.

Finally, falling transportation costs and the removal of trade barriers have also considerably contributed to buoyant trade growth prior to the crisis. As these trade frictions have already reached rather low levels, however, further improvements and hence additional support to global trade growth will be limited going forward. In addition, recent evidence is pointing at a steady increase in protectionist measures and a lack of progress in global and even regional trade liberalisation initiatives.5

An assessment of the factors driving the trade slowdown thus suggests that the weakness is likely to persist, as both the shift in activity from advanced to emerging economies and the structural factors are unlikely to reverse over the medium term. In the absence of any further positive shocks to trade openness – such as renewed waves of multilateral trade liberalisations – the new normal for the global trade elasticity is likely to look broadly similar to the weak level observed over recent years. While strong recessions in a number of countries, particularly Russia and Brazil, as well as the slowing and ongoing transition of China’s economy to a more consumption-based and service-sector oriented economic growth model pushed global trade growth even below this new normal in 2015, world trade is unlikely to grow significantly faster than economic activity going forward. The great normalisation of global trade therefore implies that even a rebound of global GDP growth to pre-crisis levels would not lead to a significant recovery of global trade.

See the original for references.