This is Naked Capitalism fundraising week. 623 donors have already invested in our efforts to combat corruption and predatory conduct, particularly in the financial realm. Please join us and participate via our donation page, which shows how to give via check, credit card, debit card, or PayPal. Read about why we’re doing this fundraiser, what we’ve accomplished in the last year, and our third goal, well-deserved bonuses for our guest writers.

Readers will recall that we summarized the effects of the Centers for Medicare & Medicaid Services (CMS) proposed new MACRA rules here:

MACRA’s goal is to revise how doctors are paid for Medicare by incentivizing for “quality,” replacing the current, fee-for-service system.  To that end, HHS proposed to introduce two new payment systems:  the Merit-based Incentive Payment System (MIPS), and Alternative Payment Models (APMs). Most doctors would automatically qualify to be a part of MIPS. The difficulties:

MIPS really does propose “to provide each physician with a composite score between one and 100” for each individual doctor [and then use that score to structure incentives]. But as PNHP’s Kip Sullivant writes,] with the exception of a few services, measuring cost and quality accurately at the individual doctor level is not possible.

Among many other problems.

Well, HHS was now taken public comments into account and issued the final MACRA rule. Sadly, MACRA remains broken. But first let’s see what HHS did. Becker’s Hospital Review has a very good summary of the changes between the proposed and final rules:

“It’s time to modernize the Medicare physician payment system to be more streamlined and effective at supporting high-quality patient care. To be successful, we must put patients and clinicians at the center of the Quality Payment Program,” CMS Acting Administrator Andy Slavitt said in a statement. “A critical feature of the program will be implementing these changes at a pace and with options that clinicians choose. Today’s policies are designed to get all eligible clinicians to participate in the program, so they are set up for successful care delivery as the program matures.”

(Note the assumption that we can, in fact, measure quality.) Here’s what Slavitt[1] means by “at a pace and with options” (again from Becker’s Hospital Review). For MIPS:

Since CMS rolled out the proposed MACRA rule, it has settled on a gradual ramp to full participation, allowing physicians to pick their pace between the following four options in 2017.

The final rule firms up details on what programs will qualify as advanced APMs. First, to qualify, advanced APMs must meet three requirements: Use certified EHR technology, base payments on quality measures comparable to MIPS and require providers to bear more than nominal risk.

If you compare this summary to “APMs are Handwaving,” above, you’ll see that, if Becker is correct, only the first item has been addressed.

Summarizing, then: CMS has backed off on draconian measures to force physicians into MIPS pronto, and has addresed one, but not all, of the implementation problems with APMs. (Here is an online tool from the AMA that helps physicians figure out where they fit within these programs. I set up an account and tried the tool, and it reminded me a lot of all those ObamaCare calculators that turned out to have very little to do with how the Exchanges turned out to work, or not work. Your mileage may vary!)

Before turning to the effect of MACRA on rural areas specifically, let’s look at a general indictment of the program. Remember the “composite scoring” concept? The no doubt well-intentioned effort to measure quality by assigning a “grade” to each individual physician? Niam Yaraghi in Health Affairs Blog gets into the weeds on how the scoring will be done:

[MIPS] assigns a “composite performance score” for each clinician based on four domains of quality, advancing care information, clinical practice improvement activities, and resource use as shown in Figure 1. [shown here] 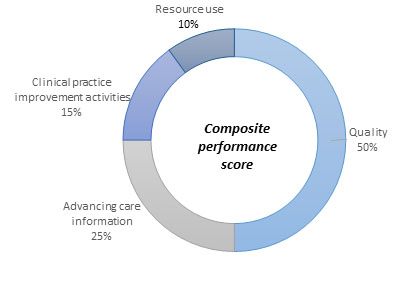 To calculate this score, only the resource use element is directly measured by the Centers for Medicare and Medicaid Services (CMS) based on submitted Medicare claims, and the other three elements are self-reported by clinicians. In 2019, clinicians who outperform their peers will receive a 4 percent bonus while those who don’t, will face a 4 percent penalty. The bonuses and penalties rise to 5 percent, 7 percent, and 9 percent in the subsequent three years.

Along with my colleagues, I have conducted empirical studies which confirm The New York Times’ anecdotal evidence, showing that about 12 percent of nursing homes highly inflate their self-reported measures as a strategy to increase their overall star rating. Note that such manipulations take place even without powerful, direct financial incentives. Compared to nursing homes, clinicians[2] will have significantly stronger financial incentives to exaggerate their self-reported measures, rendering the system ineffective.

And then there’s the problem of not knowing what “quality” means. Yaraghi goes on:

The six measures for the quality domain are chosen by physicians from a wide variety of available measures depending on their specialty and preferences. For example, a family physician could choose six measures from the 38 available options.

This means that there will be 2,760,681 possible combinations of quality profiles reported by family physicians alone. Each of those possible profiles measures a different aspect of medical quality. This large variation makes it impossible to evaluate physicians and assign a reliable performance score to them. Scoring physicians of identical medical specialty based on different measures is akin to comparing students’ performance based on different types of questions and exams.

While HHS had the best intentions in creating MIPS, the proposed rules are so abundant with flaws and weaknesses that it is very difficult to imagine the program could ever be successfully implemented.

But they’re going ahead with it anyhow, aren’t they?

Having looked at a general indictment of MACRA, let’s look at MACRA’s effect on rural practitioners. At the outset, let’s note that some of the changes between the proposed and final rules were designed to ease their burden:

The number of measures that must be reported in other categories have been reduced, especially for small and rural providers.

Providers must report up to six quality measures, including one outcome measure, and must attest [self-report] to having completed four improvement activities.

And this is meant to reassure:

“In creating a clear path for small, independent physicians to embrace the transition to value, CMS makes it possible for leading independent practices to reduce costs, boost outcomes and thrive,” said Dr. Farzad Mostashari, former National Coordinator for Health IT who is now chief executive at Aledade.

(Fine example of the revolving door there, eh Farzad?) Note that the “transition to value” is codswallop, (a) because MIPS self-reporting incentivizes fraud and (b) the quality scores are a steaming load of incommensurate crapola. It’s hard to imagine any physician with a functioning bullshit detector (“embrace the transition to value,” “boost outcomes,” “thrive” pin my bogometer) reading Mostashari and not throwing up a little in their mouth.

So, Dr. Jean Antonucci is not re-assured. From HealthCare Finance:

For small practices like those run by Jean Antonucci in Farmington, Maine, succeeding under new MACRA regulations will all boil down to the details. Unfortunately with MACRA, there are just so many she is just one of the many small practitioners dreading the rollout. That’s not surprising given the 4,000-plus comments the Centers for Medicare and Medicaid Services received on the law.

“I don’t gain anything positive from this that is not financial, and the financial gain is so tiny for the enormous complexity and reporting burden. It’s not simple and it’s not useful,” Antonucci said.

Nor is Dr. Lee Gross:

Lee Gross, MD, a primary care physician in a CMS-designated underserved area for primary care in southern Sarasota County, Florida, said his staff includes two physicians and one nurse practitioner. He lists his group as the last independently owned primary care practice in the region.

“It’s just mind blowing how many resources we spend on just compliance,” Gross said. “We don’t have a compliance officer. Who in my practice is responsible for reviewing the legislation and making sure they are doing things right?” Gross said.

Take heart, Dr. Gross. The answer is “nobody”! You can self-report!

And here is the end game (granted, from anecdotal evidence); Antonucci, also quoted in WaPo:

“I have no idea what I’m going to do yet,” acknowledged primary-care physician Jean Antonucci, who has a solo practice in Farmington, Maine. Half of her patients are covered by Medicare. “If I’m going to lose money, I’ll have to see what my options are.”

As will her patients if she quits or leaves. But let’s look on the bright side; they’ll get to go shopping!

My recommendation: Put all the health care experts in this country on a garbage scow, tow them far out to sea, and cut the cable. Then hire the Canadians to install their simple, rugged, and proven single payer system here.

[1] Poking around for information on Slavitt — the never-formally-held-accountable-for-the-ObamaCare-rollout-debacle Marilyn Taverner’s successor — I found this little nugget: “Pharma industry leaders are aware of the problem with soaring drug costs and symphathize, [Slavitt] said. The solution, Slavitt said needs to include price transparency and clear explanations to patients as to why such drug costs go up.” Oh. OK. Apparently, the policy of a single payer to muscle better prices isn’t “on the table.” I wonder why?

[2] I am using “doctor” and “physician” interchangeably; Yaraghi uses “clinician.” Probably OK for a layperson, who “goes to see the doctor,” but maybe not OK in professional circles. Can a knowledgeable reader clarify?