This is Naked Capitalism fundraising week. 205 donors have already invested in our efforts to combat corruption and predatory conduct, particularly in the financial realm. Please join us and participate via our donation page, which shows how to give via check, credit card, debit card, or PayPal. Read about why we’re doing this fundraiser, what we’ve accomplished in the last year, and our initial target, tech infrastructure

Yves here. This post is important because a vocal contingent of economists bitterly opposed the idea of extending unemployment insurance during the worst of the post crisis period. The claim was that the longer employment insurance term would lead the unemployed to become dilatory about their search and/or too fussy about what was on offer.

As joblessness soared during the Great Recession, one of the key policies enacted by Congress was to extend unemployment insurance (UI) duration. The change was dramatic: Prior to the recession, all but two states provided a maximum of 26 weeks of benefits. During the recession, however, most states reached a maximum duration of 99 weeks. Economists have long been concerned about the possible negative effects of extended benefits in reducing job search and thus the level of employment, while simultaneously recognizing the social insurance value of unemployment benefits.

Whereas a substantial body of literature in economics has estimated the impact of UI generosity on individual employment, the literature on aggregate-employment effects is small and fairly recent.

What is the difference between the individual and the aggregate effect of UI on employment?

One difference is aggregate demand. In addition to dis-incentivizing workers from searching for employment, UI also provides liquidity to workers who are well below their usual income levels, likely liquidity-constrained and therefore very likely to finance their consumption out of their UI earnings. This may have a positive impact on economic activity in general and on employment in particular, even if UI disincentivizes workers from searching for new jobs. On the other hand, there are some concerns that more generous UI benefit could raise workers’ reservation wages, which in turn could lead employers to cut back on vacancies and job creation.

Unfortunately, the nature of the UI extensions during the Great Recession makes it difficult to estimate the aggregate employment effect. The benefit-extension programs were structured to grant longer benefit lengths to states with higher unemployment rates, leading to a reverse causality problem.

To avoid this estimation problem, we examined 1,161 county pairs that straddle state borders. Within each pair, counties share a similar geography and economic environment, but often had different maximum lengths of benefits. In other words, these county pairs provided good controls for one another while receiving differential treatment. We then compared changes in county employment to changes in the maximum length of benefits within each pair for the 2007-2014 time period.

So what do we find?

First and most importantly, we find no disemployment effect from the UI benefits as measured by the employment-to-population ratio. Our estimates suggest that, at worst, increasing UI duration from 26 to 99 weeks led to a 0.09 percentage point decline in the employment-to-population ratio, and at best had the effect of boosting this ratio by 0.41 percentage points. Given the fact that this was a massive increase in benefits (almost quadrupling the pre-recessionary level of UI duration), it suggests that the concerns about disincentivizing job-search efforts may be overblown. Our estimates are consistent with modest reductions in labor supply as found in some micro-based estimates from the Great Recession, coupled with a moderate-sized aggregate demand effect from increased local spending. The findings also suggest that, at the price of $50 billion per year, the federal government was able to provide substantially more generous income support for hard hit households without constraining economic recovery.

These findings are summarized in the following figure, which plots the employment response to national level policy changes, namely the 2008 expansion and the 2014 expiration of the UEC. When the policy change occurs at event date 0, there is a clear increase of around 10 weeks additional benefits in one side of the border as compared to the other, and this change is quite persistent. In contrast, employment appears to remain largely unchanged over the following 12 months.

Our findings have important policy implications in the event of another deep recession. Policymakers should keep in mind that extending policy benefits is likely to entail a very small effect on aggregate employment, even as the social-insurance value of extending benefits to those who lost jobs is likely to be large. 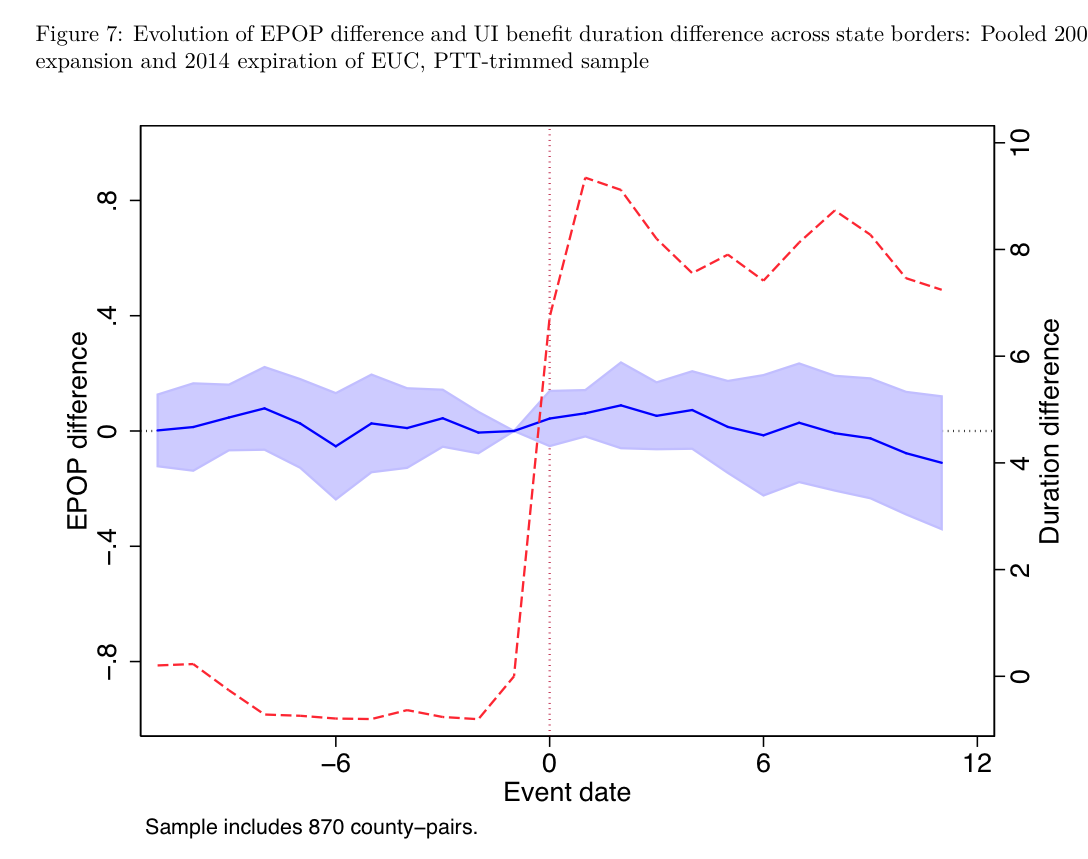