This is Naked Capitalism fundraising week. 1288 donors have already invested in our efforts to combat corruption and predatory conduct, particularly in financial realm. Please join us and participate via our Tip Jar, which shows how to give via check, credit card, debit card, or PayPal. Read about why we’re doing this fundraiser, what we’ve accomplished in the last year, and our fifth goal, more original reporting.

By Patrick Durusau. Originally published at Another Word For It

A factual basis for reporting on alleged “doctored” or “falsified” emails from Wikileaks has emerged.

Now to see if the organizations and individuals responsible for repeating those allegations, some 260,000 times, will put their doubts to the test.

You know where my money is riding.

If you want to verify the Podesta emails or other email leaks from Wikileaks, consult the following resources.

Yes, we can validate the Wikileaks emails by Robert Graham.

Recently, WikiLeaks has released emails from Democrats. Many have repeatedly claimed that some of these emails are fake or have been modified, that there’s no way to validate each and every one of them as being true. Actually, there is, using a mechanism called DKIM.

DKIM is a system designed to stop spam. It works by verifying the sender of the email. Moreover, as a side effect, it verifies that the email has not been altered.

Hillary’s team uses “hillaryclinton.com”, which as DKIM enabled. Thus, we can verify whether some of these emails are true.

Recently, in response to a leaked email suggesting Donna Brazile gave Hillary’s team early access to debate questions, she defended herself by suggesting the email had been “doctored” or “falsified”. That’s not true. We can use DKIM to verify it.
…

Bob walks you through validating a raw email from Wikileaks with the DKIM verifier plugin for Thunderbird. And demonstrating the same process can detect “doctored” or “falsified” emails.

I was just listening to ABC News about this story. It repeated Democrat talking points that the WikiLeaks emails weren’t validated. That’s a lie. This email in particular has been validated. I just did it, and shown you how you can validate it, too.

Btw, if you can forge an email that validates correctly as I’ve shown, I’ll give you 1-bitcoin. It’s the easiest way of solving arguments whether this really validates the email — if somebody tells you this blogpost is invalid, then tell them they can earn about $600 (current value of BTC) proving it. Otherwise, no.

Here’s Cryptographic Proof That Donna Brazile Is Wrong, WikiLeaks Emails Are Real by Luke Rosiak, which includes this Python code to verify the emails:

Verifying Wikileaks DKIM-Signatures by teknotus, offers this manual approach for testing the signatures: 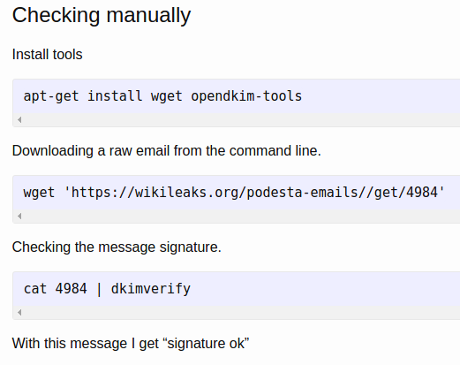 But those are all one-off methods and there are thousands of emails.

I only got signature validation on some of the emails I tested initially but this doesn’t necessarily invalidate them as invisible changes to make them display correctly on different machines done automatically by browsers could be enough to break the signatures. Not all messages are signed. Etc. Many of the messages that failed were stuff like advertising where nobody would have incentive to break the signatures, so I think I can safely assume my test isn’t perfect. I decided at this point to try to validate as many messages as I could so that people researching these emails have any reference point to start from. Rather than download messages from wikileaks one at a time I found someone had already done that for the Podesta emails, and uploaded zip files to Archive.org.

It only took me about 5 minutes to download all of them. Writing a script to test all of them was pretty straightforward. The program dkimverify just calls a python function to test a message. The tricky part is providing context, and making the results easy to search.

Automated testing of thousands of messages

It’s up on Github

It’s main output is a spreadsheet with test results, and some metadata from the message being tested. Results Spreadsheet 1.5 Megs

It has some significant bugs at the moment. For example Unicode isn’t properly converted, and spreadsheet programs think the Unicode bits are formulas. I also had to trap a bunch of exceptions to keep the program from crashing.

Warning: I have difficulty opening the verify.xlsx file. In Calc, Excel and in a CSV converter. Teknotus reports it opens in LibreOffice Calc, which just failed to install on an older Ubuntu distribution. Sing out if you can successfully open the file.

Journalists: Are you going to validate Podesta emails that you cite? Or that others claim are false/modified?