Yves here. This article is a sad vignette of how severely central bankers and many economic commentators, in this case one at Westpac, are locked into destructive orthodox thinking. The ECB’s unconventional monetary policy experiment has been an abject failure. And the reason should be obvious: businesses don’t borrow to expand just because money has gone on sale. They borrow to expand if they see an opportunity and if the cost of funding does not constrain the growth plan. The parties most likely to borrow just because money is cheap are the last ones you want to do that: financial speculators, since the cost of money is one of their biggest costs and zombie businesses, since they will borrow if they can to keep an otherwise failed venture going.

Notice also that Westpac, presumably following the ECB, views more consumer demand for credit as a good thing. Since more and more economic studies have found that borrowing by households is economically unproductive beyond a modest level, policymakers need to get over the wrongheaded idea that they should promote growth in consumer credit.

It is also bizarre to see what central bankers have rationalized or ignored in order to persist in increasingly counterproductive monetary experiments. For instance, super low interest rates drain demand by reducing incomes of savers and retirees. Yet the monetary authorities told themselves that pensioners would choose to spend their capital to maintain their lifestyles. That’s not what has happened. They’ve cut spending and even tried increasing saving to make up for lost returns. For the most part, the ones who have eaten into their nest eggs had no choice. Similarly, super low interest rates signal a lack of official confidence about the economy, and unprecedented monetary experiments are very disconcerting to many businessmen. If the officialdom is signaling deflationary risk, the rational response is to save, since goods and services will be cheaper later.

A key purpose behind the ECB’s alternative easing programs has been to materially improve credit provision and conditions in the Euro Area economy. Exhibiting a lagged relationship with the business cycle and further hampered by the health of European banks, success on this front has been slow and limited.

As referenced in their most recent policy statement, “loan dynamics followed the path of gradual recovery observed since the beginning of 2014”. However, that has only left annual growth in loans to non-financial corporates and households at 1.9%yr and 1.8%yr respectively at September 2016.

These are hardly strong outcomes and, of late, there has been a clear lack of momentum, meaning further material gains are unlikely for the forseeable future. Indeed, from the detail of the ECB’s own bank lending survey, there is evidence to suggest credit growth is set to slow.

Starting with non-financial corporates, the ECB survey reports that there is a clear downtrend in current credit demand, with the net per cent of respondents reporting increased demand for credit from firms having peaked in the first quarter of 2016 and consistently declined ever since. 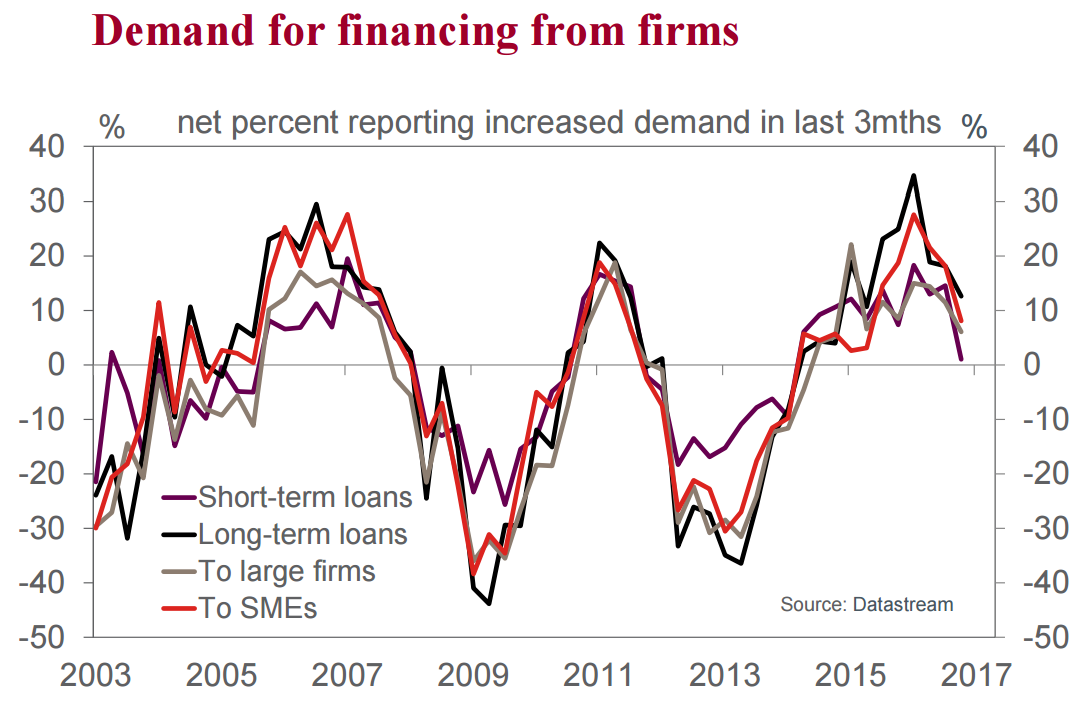 Expectations of future growth in non-financial corporate loan demand is also in a clear downtrend. Importantly, the peak in the expected series came in mid-2015 (six months ahead of the actual series’ peak) and has endured. It should be noted though that the expected series peaked at a high level and is still consistent with positive credit growth – so we are not anticipating an outright contraction in new lending. The purpose for new loans for corporates also remains unhelpful to the growth outlook for the real economy. Having improved from mid-2015 to early 2016, the six months to October saw demand for credit to fund fixed asset investment abate.

Ergo, after a prolonged contraction to mid-2015, it seems a recovery in real investment has failed to launch. This is partly attributable to a lack of confidence in the outlook. But it has also come as a result of loan conditions for firms remaining tight. The ECB’s survey suggests conditions have only improved incrementally since mid-2014. The above results imply only limited support to job creation and therefore to household incomes. It is unsurprising then that growth in credit to households also looks to be peaking at a fairly modest pace relative to history.

As for non-financial corporates, households in the Euro Area are clearly benefitting from lower interest rates. Yet the overall credit conditions they are currently experiencing are little changed from a year ago, or indeed late-2013. Note that since end-2013, the average percentage of banks reporting an easing in standards for mortgages and consumer credit has been 2% and 3% respectively. In the three years prior, an average of 14% and 6% of respondents reported tighter conditions each quarter. 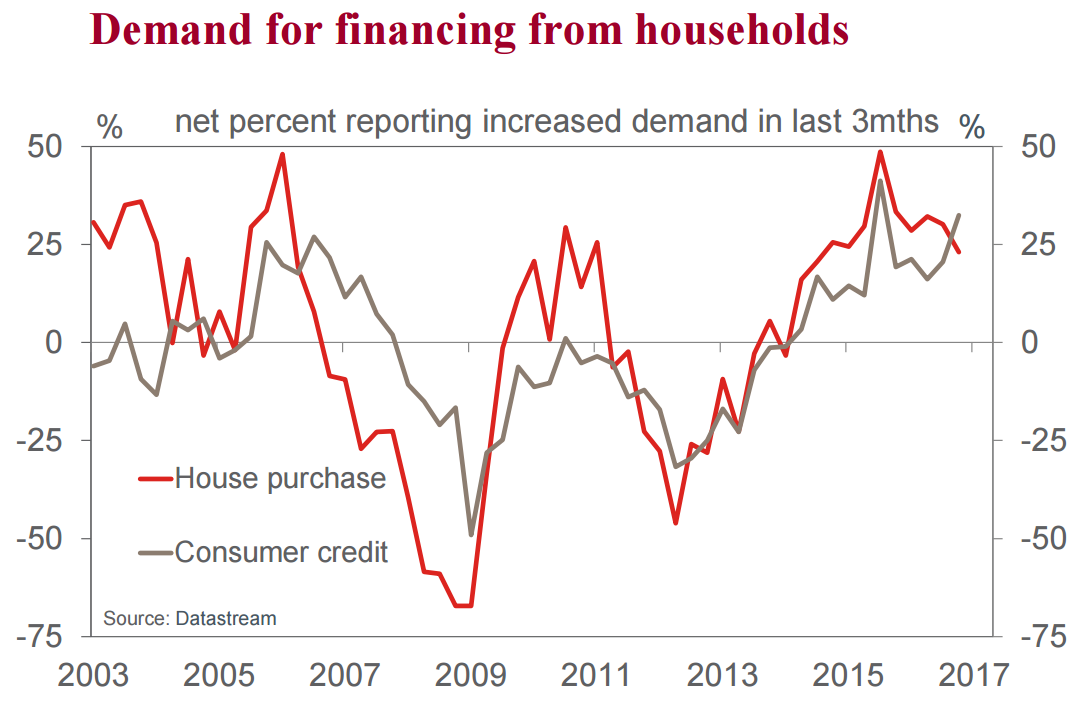 The above analysis does not, of itself, justify the ECB continuing its asset purchases well beyond March 2017 – there are many market and political points that also need to be considered. But it does suggest that credit provision in the Euro Area is not yet self sustaining. Without the ECB’s support, the Euro Area’s economy; banks; and financial markets will be left in a fragile state, susceptible to any and all economic or financial shocks.

Add the political strife building across the Continent that is threatening further eurozone fracturing with the Italian referendum in December, Netherlands election in March, French election April-May, German election in September then Italy six months later and there is no way that the ECB can allow economic weakness and/or peripheral funding stress to creep back in.

It is going to print until the cows come home.