Yves here. One thing to keep in mind with Trump is that he is much less fixed in his positions than most people and even most politicians. Aside from cracking down on illegal immigrants, getting out of TPP and redoing other trade deals, improving relations with Russia, and cutting taxes, he’s been all over the map on everything else.

Watch the first 2:45 of this clip to see a primary reason Establishment Democrats lost to Donald Trump. Remember as you read on — it didn’t have to be this way.

What we’re about to get from the incoming Trump administration is revealed in this two-page PDF released by the campaign in October before the election. I’ve pasted images of the document below. I recommend reading it through in full. Just brief comments here; I’ll say more about some of its points in days to come.

Click to open each page in a separate window at full size. Here’s page one: 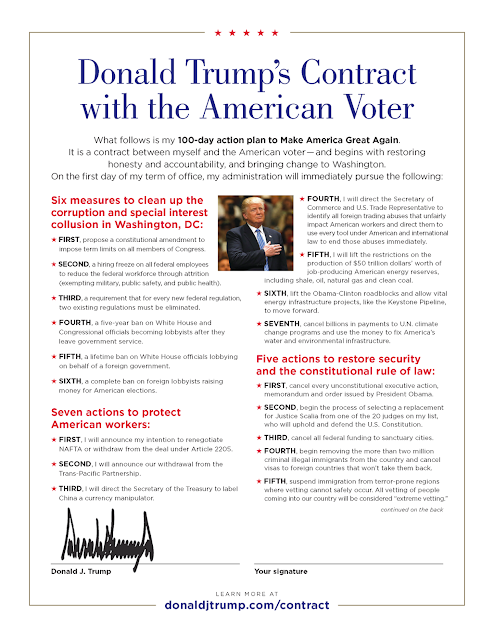 Of the “Six measures to clean up the corruption and special interest collusion in Washington, DC,” all are a farce, including and especially the so-called “ban” on lobbyists.

Of the “Seven actions to protect American workers,” the second is moot (we hope), the first and third would be greatly welcomed, including by Bernie Sanders, the fourth is too vague to be meaningful, and the rest would guarantee a radical reshaping of human life on earth — at a faster rate than the Clinton-Obama weak-tea proposals would have done. It’s death by climate under either party’s proposals, but a faster one under Trump.

The “Five actions to restore security and the constitutional rule of law,” if he did them, would increase the likelihood of a real, fighting, urban civil war in this country. The U.S. would become increasingly ungovernable. 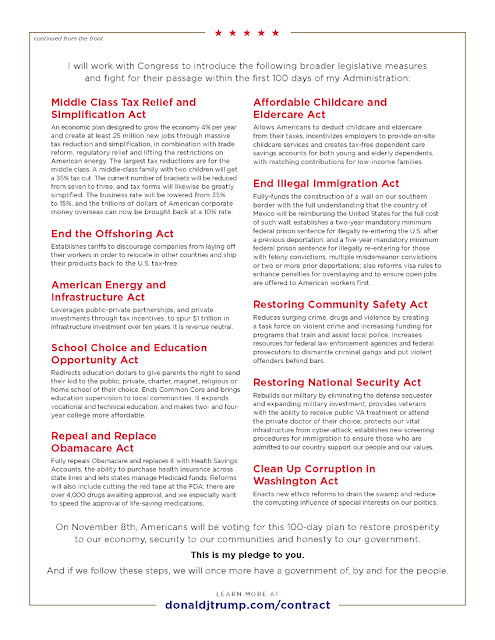 This page lists ten bills Trump will try to enact with his Republican Congress, again in the first 100 days of his administration. These include:

In short, there’s absolutely nothing good in these bills, and much that will throw the country into chaos. The federal budget will balloon (not a bad thing if properly spent, since most of the nation has yet to see a recovery), but Trump will give all new money to the wealthy and the Establishment-connected, the very people Trump voters wanted to toss out.

Even his proposals for veterans and the VA are meaningless. How do I know? This country never pays debts to veterans these days, despite all the hoopla around military pre-sales events at halftime shows. Veterans have already given all they can give to the country and can’t be induced to give more, so there’s no reason not to save money by welshing on promises that got them to join. Veterans, who are finished with fighting, have no leverage in that negotiation, nothing to withhold, and therefore no power against the government.

It’s sad to say it that way, but it’s true. The deficit never matters when it comes to war, but as soon as someone talks about VA funding, someone else mentions “the deficit,” which suddenly does matter, and the discussion ends. Both political parties play this game.

Trump especially will never increase VA funding, except cosmetically, since as a contractor, he always tries to welsh on a deal after the product has been delivered. Again, sad to put it that way, but that’s how Trump thinks and acts. Like a predator.

More as this develops. Keep in mind, America is in a pre-revolutionary state. If it weren’t for the DNC, its manipulation of the process, and the many closed (to independents) primaries it ran, Sanders would have won. Ask yourself, perhaps as you watch the first three minutes of the clip above, how someone who can fill football stadiums was beaten by someone who can’t fill a high-school gymnasium.

Answer: He wasn’t. His defeat was engineered by everyone in position to affect it.A thousand thumbs were on that scale.

America was in a pre-revolutionary state before the primary, in fact was in that state ever since the crisis of 2007-2008 and its follow-on “[False] Hope and [Neoliberals Don’t] Change” election, which seated neoliberal Barack Obama as neoliberal Bill Clinton’s successor. The Sanders and Trump ascendancies both demonstrate how strongly people want that change to occur.

No matter who won the general election in 2016, Establishment Clinton or faux–Change Agent Trump, it wouldn’t have taken much under either administration to tip the balance toward revolt, since under either the suffering were going to keep suffering the boot of the bankers and CEO class. Only a Sanders presidency would have lowered those odds significantly. It certainly won’t take much to tip the balance toward revolution, with Donald Trump grinding people’s gears.

Our job: Make sure when Trump voters’ gears are being ground, we offer highly popular Sanders Wing policies to them, and nothing else.

I think Establishment Democrats have at most six months from now to surrender to the Sanders faction (which, as the big losers of 2016, they should do). If they don’t surrender, they will make themselves an irrelevant minority party for the rest of this generation. Or until full-blown climate chaos hits and no one on the globe talks elections. Or both.

You heard it here first. Six months max for the Party to reform itself. Sinon ça, le déluge.