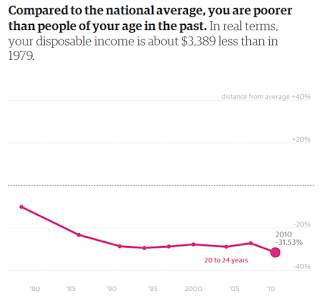 Income of Americans age 20-24 since 1979 compared to other age groups (source; click to enlarge)

The Sanders- and Trump-led (for now) political rebellion is not going to go away. There are only two questions going forward:

Why is this rebellion permanent, at least until conditions improve? Because life in the U.S. is getting worse in a way that can be felt by a critical mass of people, by enough people to disrupt the Establishment machine with their anger. And because that worsening is seen to be permanent.

Bottom line, people are reaching the breaking point, and we’re watching that play out in the 2016 electoral race.

Yes, It Is a Rebellion

(In fact, we have a good early indication of what percentage of Sanders supporters Clinton will lose — 20% of Sanders primary voters say they will sit out the general election if Clinton is the candidate, and 9% say they will vote for Trump over Clinton. By this measure, Clinton loses 30% of the votes that went to Sanders in the primary election.)

If they run against each other, Sanders and Trump, Sanders will win. You don’t have to take my word for it (or the word of any number of other writers). You can click here and see what almost every head-to-head poll says. As I look at it today, the average of the last six head-to-head polls is Sanders by almost 18% over Trump. In electoral terms, that’s a wipeout. For comparison, Obama beat McCain by 6% and Romney by 4%.

Note that Sanders is still surging, winning some states with 80% of the vote (across all states he’s won, he averages 67% of the vote), while Trump seems to have hit a ceiling below 50%, even in victory. The “socialist” tag is not only not sticking, it’s seen positively by his supporters. And finally, just imagine a Trump-Sanders debate. Sanders’ style is teflon to Trumps’, and again, I’m not alone in noticing this.

The Rebellion Is Not Going Away

If you look at the Trump side, it’s easy to see why. Are wages rising with profits? No, and Trump supporters have had enough. (They don’t quite know who to blame, but they’re done with things as they are.) Will they tolerate another bank bailout, the one that’s inevitable the way the banks are continuing to operate? They haven’t begun to tolerate the last one. They already know they were screwed by NAFTA. What will their reaction be to the next trade deal, or the next, or the next? (Yes, it’s not just TPP; there are three queued up and ready to be unleashed.)

Trump supporters, the core of them, are dying of drugs and despair, and they’re not going to go quietly into that dark night. The Trump phenomenon is proof of that.

On the Sanders side, the rebellion is even clearer. Sanders has energized a great many voters across the Democratic-independent spectrum with his call for a “political revolution.” But it’s among the young, the future of America, that the message is especially resonant. For the first time in a long time, the current generation of youth in America sees itself as sinking below the achievements of their parents.

US millennials feel more working class than any other generation

Social survey data reveals downshift in class identity among 18-35s, with only a third believing they are middle class

Millennials in the US see themselves as less middle class and more working class than any other generation since records began three decades ago, the Guardian and Ipsos Mori have found.

Analysing social survey data spanning 34 years reveals that only about a third of adults aged 18-35 think they are part of the US middle class. Meanwhile 56.5% of this age group describe themselves as working class.

Of course, that leads to this:

The large downshift in class identity among young adults may have helped explain the surprisingly strong performance in Democratic primaries of the insurgent presidential candidate Bernie Sanders, who has promised to scrap college tuition fees and raise minimum wages.

Will the Very Very Rich Stand Down?

The squeeze is on, and unless the rich who run the game for their benefit alone decide to stand down and let the rest of us catch our breath and a break, there will be no letting up on the reaction. What we’re watching is just the beginning. Unless the rich and their Establishment enablers stand down, this won’t be the end but a start, and just a start.

I’ll identify the three branches to this crossroad in another piece. It’s not that hard to suss out those three paths, so long as you’re willing to look a few years ahead, into the “middle distance” as it were. The ways this could play out are limited and kind of staring right at us.

But let’s just say for now, America faces its future in a way that hasn’t happened since the Great Depression, another period in which the Constitution was rewritten in an orderly way (via the political process). Which means that for almost every living American, this is the most consequential electoral year of your life.

I know. I’m not happy about that either.