The euro as a common currency has recently been the subject of harsh criticism by economists from both sides of the Atlantic, including claims that citizens in some Eurozone countries are turning against the it. This column argues that, in fact, the euro currently enjoys comfortable popular support in each of the 12 original member states of the Eurozone and that potential upcoming referenda in any of these countries do not appear to pose a threat to the currency. In contrast, popular support for the euro has declined sharply in non-Eurozone EU member states since the recent crisis, with the UK standing out as the country with the most negative view.

Recently the euro as a common currency has been the subject of strong criticism by economists from both sides of the Atlantic (e.g. Stiglitz 2016, Sinn 2014). This criticism has been inspired by the financial and economic crisis in some Eurozone countries and by the slow recovery in the region after the Global Crisis of 2008. Scholars claim that a majority of citizens have turned against the euro in large member states of the Eurozone, such as Germany (Stiglitz 2016: 314) and Italy (Guiso et al. 2016: 292, Sinn in Kaiser 2016a).

In the wake of the vote for Brexit in the UK referendum in June this year, it is argued that knock-on effects in the form of potential upcoming referenda on the euro in the Eurozone (e.g. in Italy) might lead to its break-up (Feldstein 2016, Stiglitz in Martin 2016, Stiglitz in Kaiser 2016b). In addition, it has been postulated that animosity amongst EU member states is at a high (Alesina 2015: 78). This suggests a rising threat to the European project, including the common currency.

These claims concerning the standing of the euro raise the question: How does the public in EU member states actually look upon the common currency at this stage? We are able to provide an answer based on survey data on the popularity of the single currency, which are available from its creation, as polled by TNS-opinion (European Commission 2016). These data are provided through the Eurobarometer (EB). The euro is a unique currency in the sense that similar time series evidence does not exist for any other currency.

Support for the Common Currency Within the Original Eurozone

We present an up-to-date picture of the evolution of public support for the euro until May 2016, adopting our approach in Roth et al. (2016). First, we focus on the original 12 Eurozone member states (Austria, Belgium, Finland, France, Germany, Greece, Ireland, Italy, Luxembourg, the Netherlands, Portugal and Spain – the EZ12) that adopted the euro as a physical entity in January 2002. Figure 1 shows average net support (in per cent) for the single currency in the EZ12 countries over a 27-year period from 1990 to 2016.

Note: The y-axis displays net support in percent. Since the figure depicts net-support, all values above 0 indicate that a majority of the respondents support the single currency. The dashed lines distinguish the introduction of the euro as a book keeping entity in January 1999, the actual circulation of the euro in January 2002 and the start of the financial crisis in September 2008. Data for EB45 were not available. Population-weights are applied. Net-support is measured as the number of ‘For’ responses minus ‘Against’ responses and is constructed according to the equation: Net-support = (For – Against)/(For + Against + Don’t Know).
Source: Figure 1 is an updated version of Figure 1 until 5/2016 (by EB’s 82-85) in Roth et al. (2016; 948).

Figure 1 leads us to the following conclusions:

Figure 1 gives the aggregate picture. How has support for the euro evolved in the individual members of the EZ12? Figure 2 provides an answer. 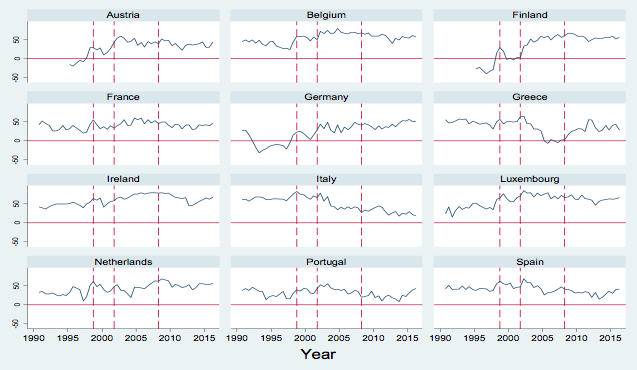 Support for the Euro Among the New Members of the Eurozone

How has support for the euro evolved in the new member states that joined the euro after its physical introduction in January 2002, that is, in Cyprus, Estonia, Latvia, Lithuania, Malta, Slovakia and Slovenia? After adopting the euro, aside from short periods in Cyprus, a majority of citizens in each country has supported the euro. 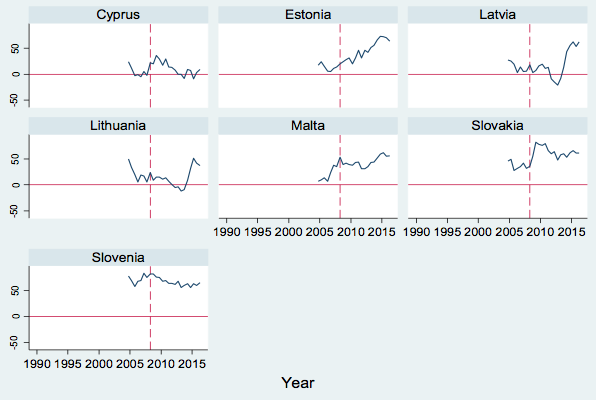 Support for the Euro Outside the Eurozone 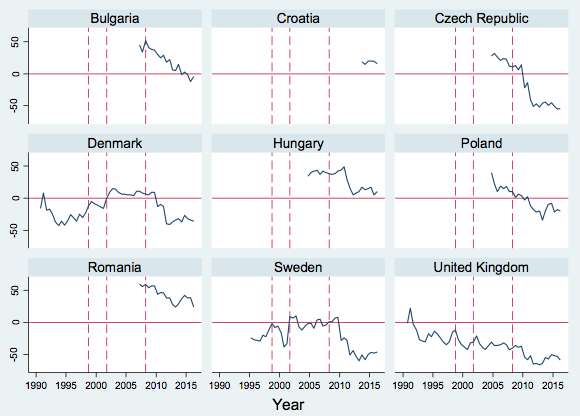 Our updated analysis of public support for the common currency over a quarter of a century, from 1990-2016, brings out four major conclusions.

First, in contrast to recent claims, a majority of citizens support the euro in each member state of the original Eurozone, including in Germany and Italy. This was the case even during the peak of the recent crisis.

Second, in contrast to some critical euro voices, we do not believe, on basis of Eurobarometer data, that any knock-on effects of the Brexit vote in any potential upcoming referenda on EU issues would pose an imminent threat to the euro.

Fourth, popular support for the common currency has fallen sharply after the recent crisis in EU member states that have not adopted the euro. Here the negative sentiment is strongest in the UK.

We suggest the following bottom line: with the exception of short periods in Finland and Greece before the crisis, the evidence points towards majority support for the euro in each original Eurozone member state (including Italy and Germany) before, during and after the crisis. So far, the euro has clear backing from the public. It has adopted the common currency as its own currency.