Lambert here: One might imagine “sentiment engineers,” gaming Twitter, using sentiment analysis as a metric for their success. Interesting nonetheless, given Twitter’s role in the Presidential election just past.

Public discourse on social media was already in favour of Brexit by early summer 2015, and stayed that way until the referendum. An analysis of more than 890 000 tweets posted since 2012 reveals clear trends in the mood of online discussion. Our new methodology captures something that betting odds and opinion polls were not able to reveal – but will it be useful in future elections?

On 7 May 2015 David Cameron was re-elected on a platform that included a promise to hold a referendum on the UK’s EU membership. A few weeks later, at the European Summit of 25-26 June, Cameron set out his EU renegotiation aims at a meeting dominated by the Greek debt and refugee crises.

Within this short time-span the amount of tweets on Brexit-related subjects jumped from around 1000 per week to 5000, which reached 10 000 if we consider retweets.

The number of related hashtags continued to rise during the following month, reaching more than 15 000 during the hot month of the refugee crisis (figure 1). 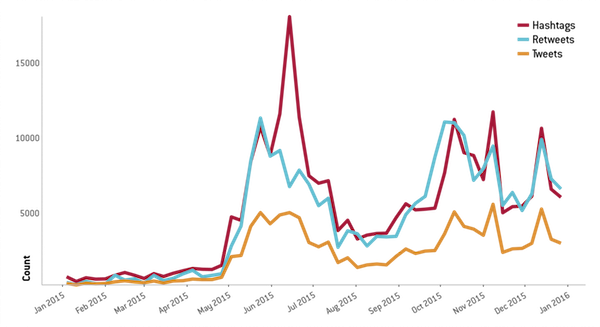 That peak was not just a momentary event, but set the tone for the rest of the time leading up to the referendum. The flow of Brexit-related Twitter activity remained strong until the vote, with clear jumps at the announcement of the referendum on 20 February 2016 and the launch of the official campaigns on 15 April 2016.

Activity then increased steadily in the final two months of the campaign, with over 100 000 Tweets per week by the end of May 2016 (figure 2).

Using the extracted tweets, we performed a sentiment analysis in cooperation with the Dortmund Center for data-based Media Analysis (DoCMA).

Sentiment analysis applies natural language processing, text analysis and computational linguistics to identify and extract subjective information in a corpus of source material. Generally speaking, sentiment analysis aims to determine the attitude of a speaker or a writer with respect to some topic, or the overall stance of a document.

This attitude may be the speaker’s/writer’s judgment or evaluation, affective state, or the intended emotional communication. Assessing a statement as positive or negative requires analysis of the words and phrases used, as well as their grammatical and discursive context. This measurement is known as contextual polarity.

In this case, we applied a novel three-stage approach developed at DoCMA. First, two human coders carried out a traditional sentiment analysis coding a sample of 1500 Tweets. In a second step, a list of sentiment words was extracted from this sample to calibrate a sentiment-metering algorithm which was consequently applied to the vast majority of the Tweets.

This semiautomatic approach is an innovative work-in-progress, whose reliability needs further clarification. Therefore, the sentiment analysis of these Brexit tweets needs to be treated with a certain degree of caution. In-depth results are due to be published in the coming months. However, initial results are promising and our findings concerning the Brexit debate appear convincing. 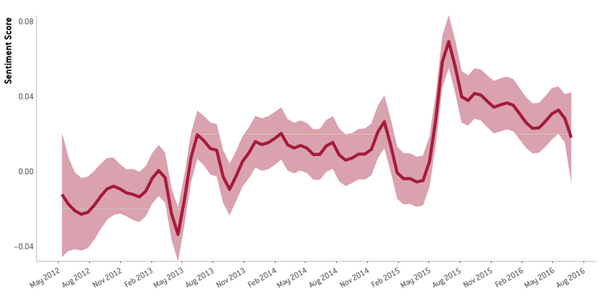 Figure 3 depicts the results by showing the overall mood in the “Twittersphere” over time. Values of zero represent a balanced view where tweets containing a predominantly pro-Brexit (positive values) and a pro-Remain stance (negative values) offset each other.

Most of the first half of 2015 was characterized by a slight bias towards the Remain position (negative values). The results change drastically in the summer of 2015, when the trend shifts considerably towards exiting the EU (positive territory in the graph). This is then where the values stay throughout the period until the referendum in June 2016.

First, the swing is associated with the refugee crisis that started grabbing the public’s attention in the summer of 2015. This was one of the most important issue driving the Brexit debate. Immigration had been a hotly debated issue in the UK before, with conservative politicians pushing for the imposition of a limit to the influx of foreigners, even from EU countries. The severity of the refugee crisis, which set in motion more than a million refugees from war-torn countries such as Syria and Afghanistan, aggravated an already sceptical public opinion. The Twitter analysis supports the hypothesis that the immigration issue fired up the debate on whether or not to leave the EU.

Second, once the overall mood has moved into pro-Brexit territory, it stays there for the remaining period. Even though values decline from an initial peak in July 2015, the high level of persistence of overall sentiment is remarkable. A predominately Brexit-favouring mood seems to be reinforced by the dynamics of social media. In particular, key Brexit activists who were highly visible on Twitter gathered ever-higher levels of attention. Sentiment in the Twittersphere proves to be enduring, a result we have encountered in other debates as well. Therefore, social media seems to reproduce (rather than disrupt) a hierarchical public discourse sphere.

The other story: Betting odds and opinion polls

Betting odds and opinion polls clearly did not catch the amplitude of the mood switch visible in the sentiment analysis. Until the very last moment, these traditional political predictors were consistently showing a tendency to remain, albeit with some fluctuation. At the most, they envisaged the possibility of a very tight result, but the fairly strong result for leave was a genuine shock.

Figure 4 – Probability of Brexit according to betting odds

This indicator tracks the average implied probability of the event ‘UK Leaving the EU’, based on bookmaker quotes available on the Oddschecker website.

Classic polling has proved rather incorrect in other recent cases as well. Donald Trump’s victory in the US presidential elections was not foreseen by the vast majority of polls. However, his huge social media presence, most notably on Twitter, told a different story.

Conclusions – What do we learn?

Twitter can be considered a novel type of elite media that enables agenda setters to communicate directly with other agenda setters and a politically active part of the public (Boynton & Richardson 2016).

Whoever gets sufficient attention in the Twittersphere can count on his or her messages being taken up by traditional media, thereby boosting the senders’ reach and potentially influencing public opinion on a broader scale.

It is therefore not far-fetched to argue that sentiment analyses of tweets may offer useful new early indicators for public opinion. In particular, this should be the case when debates entail clearly distinct poles. If decisions are to be taken either for or against a certain policy, or if candidates represent the wings of a bipolar political system, Twitter analysis should be of particular value.

In traditional parliamentary elections, however, where parties compete through complex programs on a wide range of policies, social media analysis in this form looks less promising for the prediction of election outcomes.

The authors would like to thank Gerret von Nordheim of TU Dortmund University/Dortmund Center for data-based Media Analysis for his highly valuable support in conducting the Twitter analysis.