A raft of stories at the Financial Times verges on funny, in that they affect consternation that EU bureaucrats are intent on taking a big chunk out of the City’s business. It was obvious that this would happen and we said so repeatedly over the summer. Yet it’s been astonishing to see Brexit boosters, the few that wander into Naked Capitalism and the ones who are well represented in Fleet Street, act as if the UK somehow has the upper hand. As we’ve written, Brexit fans have chosen to ignore repeated, crystal clear, and surprisingly unified warnings from EU leaders that they will give the UK no quarter if it really does go through with a Brexit.

The current cause celebre is that France and the ECB are working to expedite a plan to move Euroclearing from the UK to the Continent in the event of a Brexit. This was an obvious target: the ECB had already tried to extract Euroclearing from London. Britain fought back and the European Court of Justice ruled that the ECB could not discriminate against the UK because it was an EU member.

No EU membership, no impediment to moving Euroclearing. And the new wrinkle is the Europeans plan to set the process in motion more or less contemporaneously with the UK’s planned date for invoking Article 50.

Defending London’s cornerstone euro clearing business has been a totemic issue for UK governments. London is the world’s biggest centre for clearing euro derivatives, handling three-quarters of all transactions, with an average daily value of $573bn, according to an Intercontinental Exchange (ICE) paper recently circulated to EU member states.

The paper, seen by the Financial Times, argues that “forced repatriation” of euro clearing would “deprive European banks of access to liquid trading and clearing facilities and create fragmentation”. ICE, the largest operator of exchanges and clearinghouses in European utilities, added: “This would increase costs considerably for banks and customers.”

Simon Kirby, the UK’s City minister, has also warned that the euro clearing business would probably move to New York if the EU attempted to undermine the UK’s dominant position, leaving Europe “worse off”.

But France’s President François Hollande has called for euro-denominated clearing to be relocated to the euro area after Brexit, saying that such an outcome would “serve as an example for those who seek the end of Europe”.

Now of course, the issue is “cost for whom and measured how?” London is the premier foreign exchange center of the world due to its time zone advantage and also being a hub for UK and one-time British empire banks (Barclays and HSBC) that had very extensive foreign branch networks. That meant they not only dealt in large volumes of foreign exchange, but they also dealt in exotic currencies. As a customer, if you are dealing strictly in Euros, it’s hard to see much efficiency difference whether clearing in London or the Continent. It’s customers that are dealing in multiple currencies who might see efficiency losses. Needless to say, the ECB is concerned about customers who deal in Euros.

And there is a policy argument that high liquidity and super low transaction costs merely encourage speculation. If as some commentators whinge, moving Euroclearing to the Continent will make derivatives transactions more costly, that could be desirable. But you’d need to look further to see which type of transactions would be most affected and whether they had social utility or not.

The EU also has a national sovereignity argument of its own: banking is a strategic asset. Having more banking operations under domestic control is politically sound. If London is out of the EU, and therefore out of EU regulators’ control, then it is foolish to be dependent (or have significant dependencies upon) banks outside your political and regulatory purview. That is arguably more important than efficiency (meaning cost) considerations.

For those new to this topic, Business Insider provides some helpful background and data:

Clearing houses in London manage credit risk, acting as a middle-man in swaps and derivatives trades to guarantee the contract in the event that one of the parties involved in the trade goes bust.

The acceptance of English law and widespread use of English language has made London a hub for clearing globally. The charts below, from the House of Lords select committee report on Brexit’s effect on financial services published this week, shows just how dominant Britain is in the market: 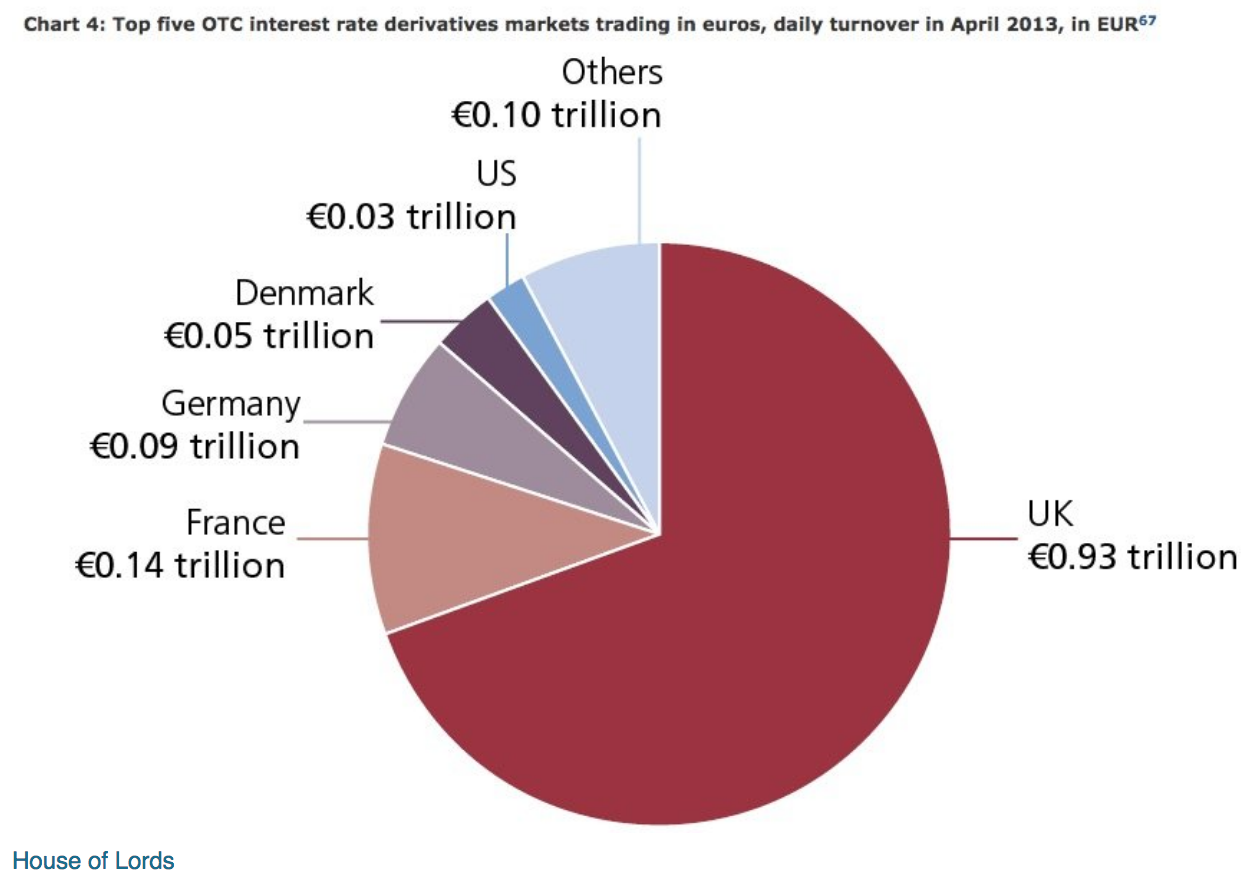 In the Financial Times comments section, a reader provides a high-level overview of the implications for banks:

Ok – so what’s going on is that

1. The UK has a very lax regime (by global standards) for letting non-EU entities do business from London on the basis of their authorisation in Japan, USA wherever (you can, to put it simply, register with the FCA etc on the basis of your home country status)

2. If the UK is in the EU the entities that are doing business in London can then passport into the EU

3. So a US entity (not a European subsidiary, the US entity itself) can do business across the EU via a London branch

4. The US entity will trade across Europe via its London branch, often under the same trading documents as they use out of NY (which means you’re netting all these trades) and via clearing houses (which also means youre netting) (the big two in Europe are LCH and Eurex – and they both have big US trading businesses hence netting across European based US dollar trades as well as Euro trades)

4. So capital deployed in the US entity can be used to access the European market – this is more efficient than setting up a new bank and capitalising it because you won’t have netting if the trades are divided between legal entities (separate to the cost of the separate entity)

5. Thus, London is how the New York dollar liquidity pool is accessed by the European market (and gets netted against Euro trading to boot)

Passporting is one half of the raison d’etre for trading and thus clearing out of London because it is a reason to trade out of London.

The ECB probably can, IMO, stop non-EU entities clearing but hasn’t done so till now because doing discourages the use of Euros as a reserve currency. Also, the EU has had most of its Euro trades taking place in the EU (the UK) so its relaxed about not having a restriction. The US doesn’t restrict either but about 80 per cent of dollar trades by value take place in the US – the issue for the EU post Brexit is that most of the trades in its currency will be taking place outside of its supervision. I don’t think they will accept that and I think the US certainly wouldn’t.

If the EU doesn’t restrict clearing to the EU, London branches of US entities still won’t be able to access the European market due to passporting being gone so one of the benefits of doing business in London falls away – the other key benefit, that London trades can be netted against US trades (because they are done by the same entity) remains but there will be fewer trades you can do from London. So the argument for trading moving to the US is simply to do with redeployment of capital and personnel to NY since, in relative terms, capital will be more efficiently deployed in NY since one the raison d’etres for London has fallen away.

So this is why clearing matters, not the small number of people who work at CCPs

I expect another winner will be Singapore, particularly on the derivatives side.

In another proof of how deep denial about Brexit impact runs in some quarters of Britain, the lead story in the US edition of the Financial Times as of this hour is Japanese banks warn of leaving London without Brexit clarity. From the top of the story:

Japanese financial institutions have warned they need clarity on the UK’s future relationship with the EU or they will begin moving some functions from London within six months.

Executives from Japanese groups including investment banks Nomura and Daiwa Capital Markets laid out their position at a “frank” meeting on December 1 with the UK City minister Simon Kirby and Mark Garnier, international trade minister with responsibility for financial services, according to two people with knowledge of the meeting.

One senior executive of a big Japanese bank said this week that the uncertainty surrounding London’s future as a gateway to Europe meant it “would be better for our EU-based customers to have an alternative hub”.

The funny bit here is that is is hardly a secret that foreign banks in London started scouting for real estate and getting licenses in various spots in the EU almost immediately after the Brexit vote was tallied. And several have made loud noises about how many jobs they will pull out of London.

The only difference is that the Japanese have a different way of going about things. The ritual of the “frank chat” (which they can have only in a foreign tongue) is to respect the form of maintaining a relationship while telling the other side that Something Has to Change. That is to give the other side the opportunity to shift their position. The ritual of formality, in other words, is to precipitate a negotiation if one can be had, or otherwise to bend over backwards in being polite by giving a type of formal notice.

The only part that may look like a surprise is that the Japanese say they will start moving operations so soon. But again, it’s almost certain other foreign banks are on the same, if not earlier timetables, via measures like suspending hiring in London, accelerating attrition, and adding staff in other centers. The one big difference with the Japanese is that they need to have Japanese nationals in senior positions. Relocating that level of employee (deciding who goes where) is a fraught and difficult process (as in the internal politics are even messier than in Western firms).

So the really noteworthy element is that the Brits are so offended that the EU is playing nasty, as one pink paper commentor wrote. This isn’t beanbag, and EU officials have said from the very outset that they were not going to be nice. Shame on the British pols, press and public for not taking them at their word.