Jerri-Lynn here:  This post reminds us that while we’ve all been fixating on US pipeline policy, both current– e.g. DAPL — and future– under president-elect Trump, the US has no monopoly on poor pipeline decisions that in the long-run will only exacerbate climate change. Canadian Prime Minister Justin Trudeau’s decision to approve a major expansion of the Kinder Morgan Trans Mountain pipeline has major international implications, as author Kevin Grandia spells out below.

And, just as the Standing Rock Sioux tribe is spearheading anti-DAPL efforts in the United States, so Grandia suggests that Canadian First Nations’ communities– which strongly oppose the Kinder Morgan Trans Mountain pipeline– will follow through with anti-pipeline initiatives, including court proceedings.

Note that I provide only a short version of Grandia’s complete biography below. Interested readers can find a more complete version here.

By Kevin Grandia, who is a contributor and strategic adviser to DeSmogBlog and DeSmog Canada. He runs the digital marketing agency Spake Media House. Named a “Green Hero” by Rolling Stone Magazine and one of the “Top 50 Tweeters” on climate change and environment issues, Kevin has appeared in major news media outlets around the world. He was Senior Advisor to the Minister of State for Multiculturalism and a Special Assistant to the Minister of State for Asia Pacific, Foreign Affairs for the Government of Canada. Kevin also worked in various roles in the British Columbia provincial government in the Office of the Premier and the Ministry of Health. Follow him on Twitter @kgrandia. Originally published at DeSmogBlog.

Canadian Prime Minister Trudeau’s decision this week to approve a major expansion of the Kinder Morgan Trans Mountain pipeline has negative implications that go well beyond the borders of the Great White North.

Canada is currently the largest importer of oil to the United States. We import more oil than Saudi Arabia, Venezuela and Mexico combined. We are a secure, stable and reliable trading partner with the US for a product that can make or break their economy.

Right now, Canada has almost zero ability to transport its oil to anywhere other than the United States. There is no big spigot off of our east, west or north coasts that allows for overseas export to other markets, particularly in Asia.

Approving the Kinder Morgan Trans Mountain pipeline expansion changes all of that, and for the first time Canada might be capable of shipping significant amounts of oil to markets other than the United States (assuming the project is actually completed — a big question mark given ongoing First Nations’ legal challenges and resistance from British Columbians).

This fact has got to have the attention of the US government. Their stable, reliable and secure oil supply is now, for the first time in history, under threat of going to other markets.

What is President-elect Donald Trump Thinking About This?

I would bet this announcement is on President-elect Trump’s radar. Trump has promised to renegotiate or even terminate the North American Free Trade Agreement with Canada and Mexico. Trump has also promised to restart the process of building the Keystone XL pipeline that would significantly expand transport capacity for tar sands oil from Canada to the United States and foreign export markets via the Gulf of Mexico.

While there is no doubt a benefit to Canada diversifying the customer base for its oil products, it may come at the expense of ticking off our biggest customer to the south. In the complicated world of geopolitics and oil, who knows where this could lead.

Here is a graph showing the largest proposed oil and gas projects in the world, along with the carbon emissions they will put into our atmosphere: 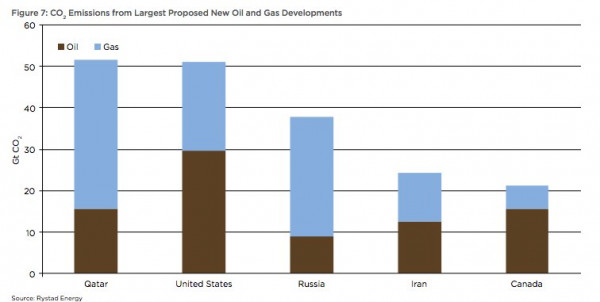 According to a report earlier this year by Oil Change International, if these projects are built, we are toast. Burnt toast that is.

It is crucial to the earth’s climate that the projects represented in this graph are never built. Canada is in that top five as you can see, and you can also see that some not-too-cooperative countries are also in the top five, including Russia and Iran.

What kind of message does Trudeau’s approval of the  Kinder Morgan Trans Mountain pipeline project send to these other countries like Russia, Iran and Qatar?

I don’t think it is much of a stretch to say that if there was any inkling of hesitation amongst these other countries to not proceed with building their own new pipelines, that has all been thrown out the window with Trudeau’s decision.

In fact, it is most likely that many of the countries in this graph will speed up their timelines, so as to maintain a competitive edge in the oil market over us Canadians.

Oceans Have No Borders

The Kinder Morgan pipeline expansion will increase oil tanker traffic from around 60 tankers per year to more than 400. So instead of a massive oil tanker coming through Vancouver’s waterfront and the Burrard Inlet on average every couple of weeks, we will now see on average one a day.

Experts have always said that when it comes to oil tankers, spills are not a question of if, but when. We have been relatively lucky so far that the only major spill from the existing Trans Mountain pipeline happened on land. And no matter how prepared we could be for a spill in our Inner Harbor here in Vancouver (which history has shown not to be the case), the problem is likely not containable within our own borders.

According to media reports last year, the neighboring Washington State government is “worried about Canada’s ability to respond to oil spills.” And they should be considering that the US-Canada ocean border is only a few miles from where all these oil tankers would travel through. The US San Juan islands for instance is a major tourism destination and home to diverse marine life, and is in serious risk from any spill that happens just up the coast. 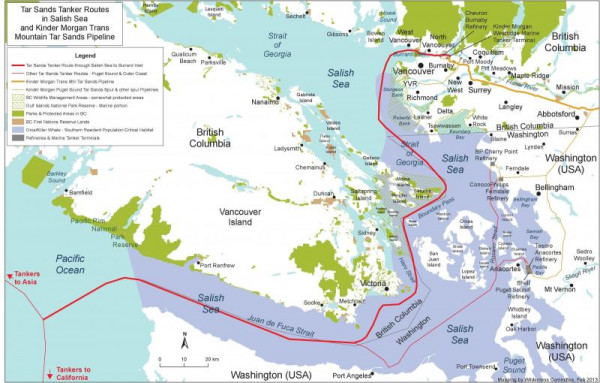 First Nations communities on both sides of the border are tied together in the Salish Sea, which predates any borders. The Coast Salish nations, along with many other First Nations’ communities, are strongly opposed to this pipeline and so we will see mounting opposition and court proceedings, with implications that will likely reach across the Canada-US border.

Our friends in the US take on a lot of risk from a potential oil spill, but see none of the economic benefits of Canada’s expanded oil export capabilities.

All risk and no reward is likely something that is not sitting too well with Washington State Governor Jay Inslee, who is a very vocal supporter of action on climate change.

What About the Paris Agreement?

The Paris Agreement, negotiated late last year by 195 countries, commits the vast majority of world leaders to dealing with the issue of climate change by committing to significantly reducing their country’s greenhouse gas emissions over the coming decades.

At the time, newly-elected Prime Minister Trudeau and his Environment Minister Catherine McKenna were a breath of fresh air at the Paris climate talks. As much as we are a small country (by population), Canada is a significant player at these climate negotiations because per-capita we are historically a large emitter of greenhouse gas pollution. We also hold massive amounts of greenhouse gas reserves in our oil sands and other fossil fuel deposits. So to see Trudeau and McKenna step up at the Paris climate talks was a big deal.

The Paris Agreement is both a functional document and a symbolic one, and in many ways its symbolism is the more powerful of the two.

Speaking of lip service, did you hear about Prime Minister Trudeau approving a new expansion in oil sands pipelines that will lock in massive new amounts of carbon being pumped into our atmosphere?

Somehow Trudeau and his government think they can reconcile a commitment to the Paris Agreement on climate change with the construction of a new pipeline that will greatly increase emissions of the very thing the agreement is trying to reduce.

On paper Trudeau might be able to make that case, but he is missing the real point of the Paris Agreement and that is the signal it sends out to the world.

With Trudeau approving the Kinder Morgan pipeline expansion, he and his government have just thrown a big bucket of sloppy crude onto that clear and resounding signal the Paris Agreement sent out to the world.

Between domestic unrest and the international ramifications, this pipeline decision will likely come to define much of Trudeau’s time in government, which quite honestly I think is something this Prime Minister really didn’t think through that well.