Hundreds of thousands of fish wash up on Cornish beach Guardian (UserFriendly) :-(

This Melting Glacier in Antarctica Could Raise Sea Levels By 11 Feet | Motherboard (resilc). To quote Jay Leonhart circa the mid-1980s (in the Salamander Pie album, back in the day when there were still albums…)

I say goodbye Miami, goodbye Lauderdale
Pass me a bucket, fetch me a pail
The old folks in the condos are up to there knees
With the wind and the salt and the sea

There’ll be no need to worry about air pollution
When your up to your neck in a saline solution
Oh the tide she comes in and she lingers about
But the tide she don’t want to go out.

So I say, goodbye Miami, goodbye Sarasota
The Gulf Coast now reaches Pierre, North Dakota
The tops of the toll booths are all that you see
As we sail down the causeway for free

Is Mental Health Declining in the U.S.? Scientific American (Chuck L). As of 10 years or so ago (pre crisis), 26 million people in the US were taking anti-depressants, and we’re asking this question only now?

DANIEL ELLSBERG, EDWARD SNOWDEN, AND THE MODERN WHISTLE-BLOWER Malcolm Gladwell, New Yorker. Readers will have a field day with his discussion of Snowden.

A century of surveillance: an interactive timeline of FBI investigations Muckrock (Chuck L)

The Sixth Anniversary of the Start of the Arab Uprisings Jadaliyya

Trump taps Mulvaney for budget director The Hill (resilc). One of my contacts was very bothered by this. Mulvaney is a very hawkish on debt. But the OMB is not powerful.

The Hacking Evidence Against Russia Is Extremely Weak George Washington

All This Talk of Voter Fraud? Across U.S., Officials Found Next to None New York Times. Lead story.

The Striking Audacity of the Coup-in-Process Paul Craig Roberts

The real reason the GOP is gung-ho on repealing Obamacare: It would give the rich a huge tax cut Los Angeles Times

How Doctors Could Thwart Health-Care Reform New Yorker. I don’t buy this. Doctors are vastly less powerful as an interest group than they once were, as the rise of corporatized medicine, forcing more of them to work as employees (for MBAs, gah!) rather than independent professionals, demonstrates.

Larry Kudlow Isn’t an Economist, but He Plays One on TV Nation

Keith Ellison for Democratic National Committee Chair Democratic Socialists of America. Martha r: ”
Surely they know about his endorsement of Bittel?” Background: Findings by Florida Democrats Support Election of Millionaire Donor Bittel to Chair Progressive Army. Bittel is part of the establishment Dems in Florida….the most important of which is Debbie Wasserman Schultz.

Monopolization Is the Problem BEHIND “Fake News” Washington’s Blog. Important. A tweetstorm by Matt Stoller.

What Happens to Media Matters in a Post-Hillary World? New Republic (resilc). As Lambert says, “Kill it with fire.”

The Rise of the Alt-Center: What the hell is wrong with America’s establishment liberals? Slate (UserFriendly). Lambert had this yesterday but wanted to make sure you saw it…

OxyContin goes global — “We’re only just getting started” Los Angeles Times. I used to think Monsanto was the most evil company, but it has some serious competition.

Sounding the Alarm about Uber’s Impacts on Transit, and on Cities Human Transit (Steve C)

The ‘alternative workforce’ is growing. Here’s why World Economic Forum. UserFriendly: “Not just uber and Grandma is more likely to be one than a millennial.

To Hell with Neoliberal Environmentalism Permanent Settlement (Bjornasson). A must read.

Antidote du jour. I wonder what is going on in the readership’s collective psyche. Not that I am complaining, but normally we get quite a mix in terms of type of critter in our Antidote candidates. In recent weeks, we’ve a had a huge run of birds. Suddenly we’ve gotten a lot of great images a grazers like this one from a new reader, Karrin:

Here is a picture of my two pet goats, Catalina and Ferdinand, eating some fresh fruit treats to supplement their hay, which just gets so boring when it’s all there is to eat in the wintertime. And yes, they are wearing Christmas collars. But no, they are not this fluffy in the summer. They just have healthy undercoats of cashmere for winter warmth! I fairly blatantly, illegally keep them in my largish yard in urban Kansas City, Kansas, where they control brushy weeds and go for walks on leashes through the neighborhood. 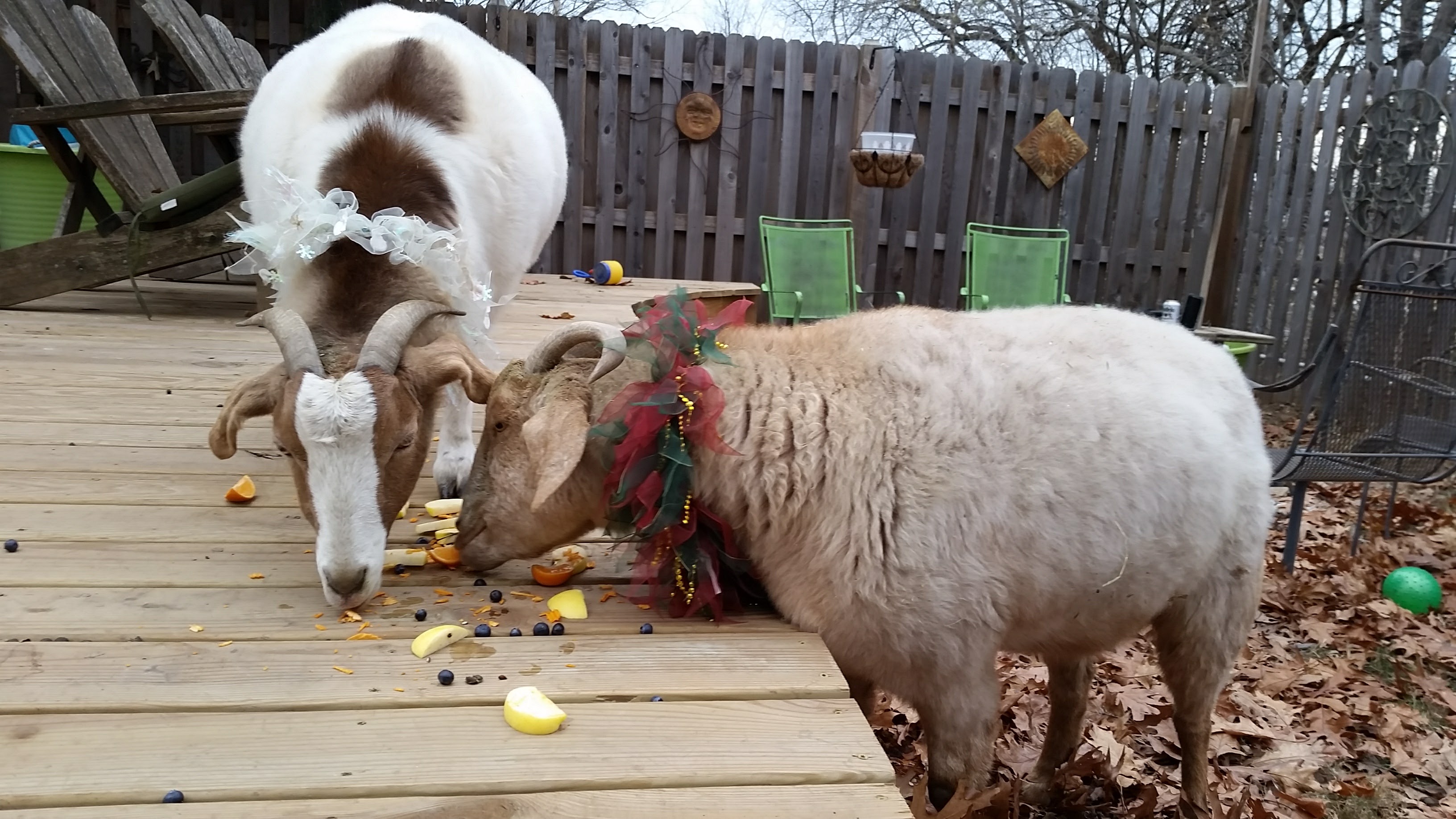