Don’t mention this around the Christmas table: Brexit, inequality and the demographic divide London School of Economics

Aleppo Before the War Atlantic (furzy)

Aleppo tweeter Bana al-Abed meets Turkish president Erdogan – video Guardian. YY: “Say one is a total sucker buying into Bana, would that poorly informed reader also think that Erdogan is a nice guy in comparison to say an Assad or Putin? The BS is going to reach critical mass soon (one can only hope).”

Europe’s top court guts key parts of UK spy law Politico. Final paragraph: “The ruling could still be binding on the U.K. after it leaves the European Union, depending on its data agreements with the bloc.”

The U.S. is no stranger to interfering in the elections of other countries Los Angeles Times (JMP)

Norman Bates 2.0: Starwood and Wynn are excited to hide a camera and microphone in your hotel room Pando (Chuck L)

Trump to Name Carl Icahn as Adviser on Regulatory Overhaul Wall Street Journal. You cannot make this stuff up.

Trump Organization Moves to Avoid Possible Conflicts of Interest New York Times. As the story notes, Trump is trying to clear up conflicts with outside parties (lawsuits, labor disputes) that would otherwise come to a head after he takes his oath of office. But he’s got no good answers for the conflicts of interest regarding his empire. Not than this would lead to any sort of action against him. But it could subject him to a drip drip drip of negative stories.

Top 5 Reasons Senate Dems Should Block All Trump Supreme Court Nominees, Forever Juan Cole (furzy). This is the sort of fight the Dems should be focusing on.

Obama Says His Daughters Won’t Work on Wall Street Bloomberg. Aren’t parents supposed to let their kids make their own career choices? But the only reason to go to Wall Street is the money and (right now) Silicon Valley looks like the hotter ticket, as witness a recent exodus of what passes for talent.

Its main ‘fact checker’ is Kimberly LaCapria, whose blog ‘ViceVixen’ says she is in touch with her ‘domme side’ and has posted on Snopes.com while smoking pot

We Have a Bad News Problem, Not a Fake News Problem Snopes. So in fairness to Snopes, it is not on board with the “fake news” assignment.

SEC Charges Former New York Pension Official and Two Brokers in Pay-to-Play Scheme SEC. “Approximately $50,000 spent at restaurants, bars, lounges, and on bottle service.” There have to be prostitutes in the mix, and I’d hazard they are buried in this line item.

Trump rally could be like Coolidge’s Roaring ’20s before Depression, Nobel-winning economist warns CNBC. Lordie. Shiller should know better. The 20s stock market boom was the result of: 1. Bona fide growth in all sorts of businesses due to more and more homes being electrified as well as the sales of all sorts of new consumer durables. In other words, there was serious real economy new tech that led to higher consumer spending. 2. A lot of that consumer spending was debt financed. 3. The reason the stock market crash was so destructive is that the speculation was heavily debt fueled, with leverage of 70% to 90% not uncommon (and that’s before you get to trusts and trusts of trusts). That meant when it collapsed it blew back to the banking system.

Now 1. The Trump stock market rally may well be overdone and get even more frenzied before it goes into reverse. But 2. We don’t do serious leverage in the stock market any more, so any real economy harm due to a stock market bust would not be all that bad. 3. Trump may very well blow other bubbles that will impair the banking/credit system, and Shiller would do better to worry about that.

California DMV Public Affairs (1 SK). E-mail on the DMV revoking the licenses of all 16 Uber self-driving cars. Weirdly there is nothing on the site about this in the DMV press room as of this hour. The text of e-mail message:

Consistent with the department’s position that Uber’s vehicles are autonomous vehicles, the DMV has taken action to revoke the registration of 16 vehicles owned by Uber. It was determined that the registrations were improperly issued for these vehicles because they were not properly marked as test vehicles. Concurrently, the department invited Uber to seek a permit so their vehicles can operate legally in California.

California’s testing regulations for autonomous vehicles strikes a balance between protecting public safety and embracing innovation. These regulations were adopted two years ago, and they are working for the 20 manufacturers now testing more than 130 autonomous vehicles on California’s streets and roads. Uber is welcome to test its autonomous technology in California like everybody else, through the issuance of a testing permit that can take less than 72 hours to issue after a completed application is submitted. The department stands ready to assist Uber in obtaining a permit as expeditiously as possible.

Attached is the letter that DMV Director Shiomoto sent to Uber earlier today.

In Sentencing Radical Pacifists, Judge Miles Lord Assailed “Worship of the Bomb” Counterpunch (Robert H). A reminder of how much jurisprudence in the US has changed.

Antidote du jour. Margarita: “A hummingbird flew onto the balcony at the beginning of Dec., so I bought a feeder right away. At least two h-birds have been coming to feed – even though it has been snowing in Vancouver for the last two weeks. How do they keep warm at night?” 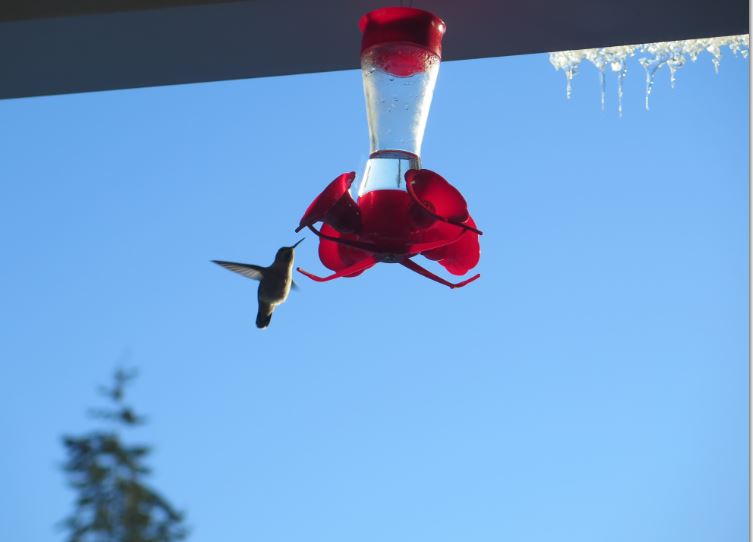