Despite considerable opposition, South Carolina Treasurer Curt Loftis, the only elected official on the state’s six-member pension board, has made great progress in exposing corruption and incompetence in the management of the pension system. For instance, South Carolina has been cited by public pension industry standard-setter CEM Benchmarking as one of the two pension systems in the US that has gone the furthest in getting disclosure of fees and costs from private equity funds. And to give you an idea of how far South Carolina has gone relative to its peers, consider this section of our write-up:

Loftis was singlehandedly responsible for pressuring fund staff to go the distance on getting more fee and cost disclosure. And his efforts have considerably raised the bar for the entire industry.

Yet the state is about to strip Loftis of his role on the pension board. Key sections from a press release on the Treasurer’s website:

The Joint Committee proposed to remove me, the only elected official from the Retirement Systems Investment Commission. It also proposed to transfer the role of custodian of the state’s retirement funds from the State Treasurer’s Office to the Public Employee Benefit Authority and RSIC, the very agencies that have mismanaged the pension system.

Here are the money shots from a slideshow prepared by Loftis giving a high level overview of the depth of the problems with the pension system; we’ve embedded his “beginner” and “intermediate” presentations at the end of this post. 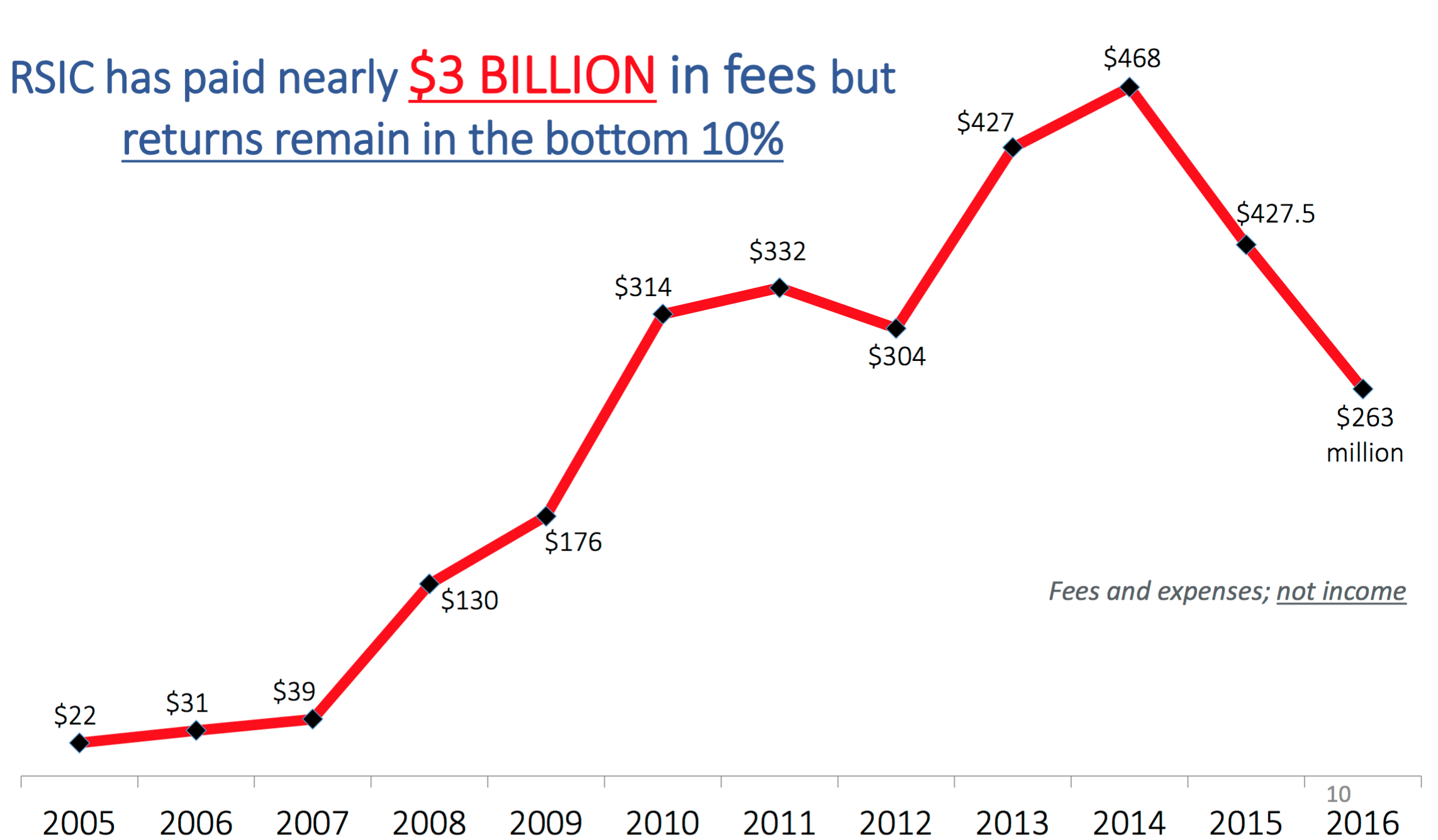 And not only are taxpayers on the hook, but state employees are also overburdened: 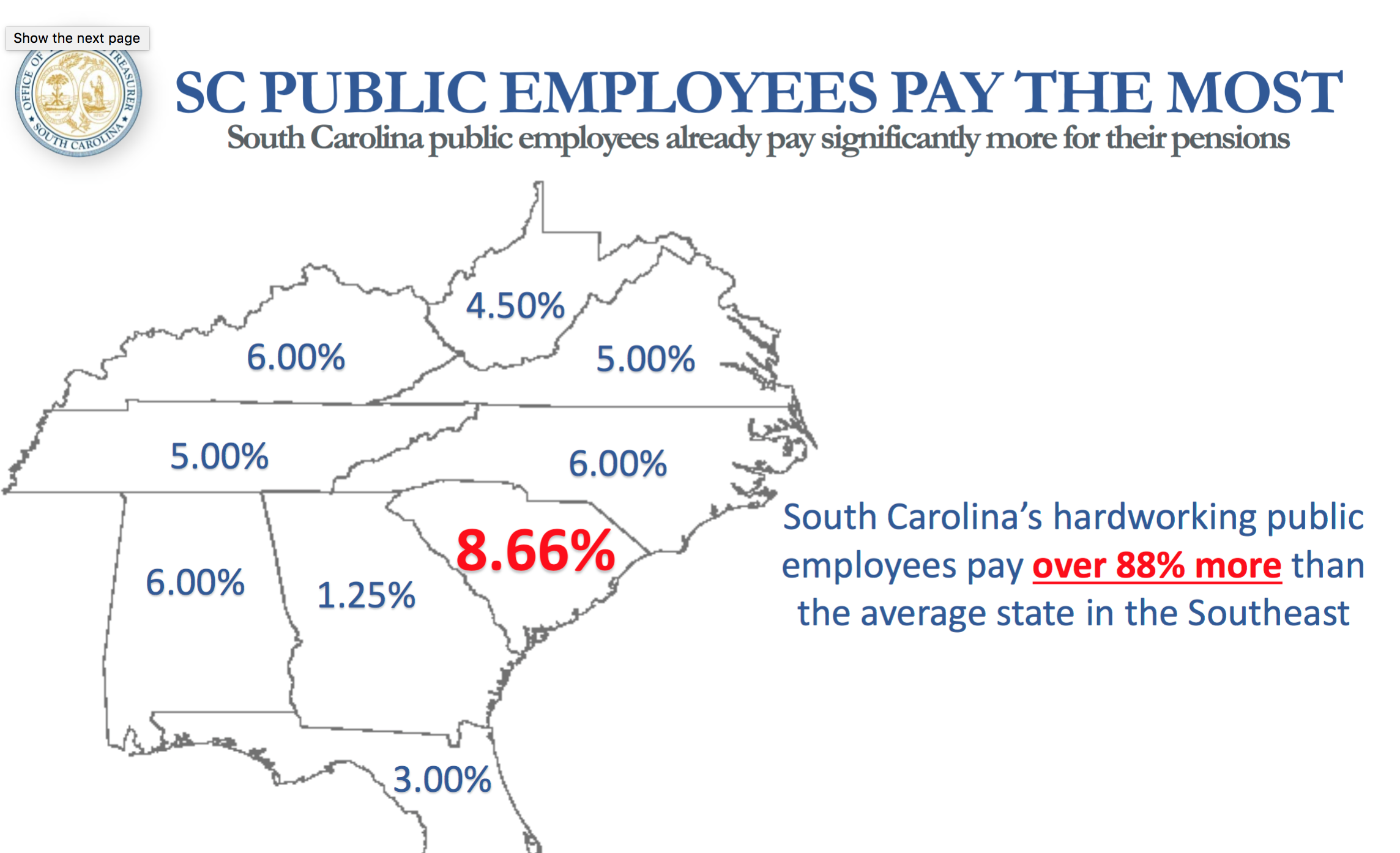 And Loftis figured out early on that the pension system was far too cozy with high-fee alternative investment managers who were under-delivering. From a 2012 New York Times story (hat tip David Sirota):

Today, the pension fund has a higher share riding on private-equity and hedge-fund plays — called “alternative investments” in some circles — than almost any other state’s: $13 billion, or more than half its total….

But here in South Carolina, the state treasurer, Curtis M. Loftis Jr., is worried that pension officials have had their heads turned by Wall Street players who stand to benefit from the state’s money. “This is a world where people have private jets, massive apartments overlooking Central Park, people who live exotic lives,” said Mr. Loftis, reclining in a chair in his baby-blue office at the State House, as his black Labradoodle, Camey, snoozes nearby…

Funds like South Carolina’s are now left with many high-cost investments that in many cases have fared worse than old-fashioned stocks and bonds. The South Carolina fund earned 3.1 percent, annualized and before fees, in the three years through last June, the end of its fiscal year, versus 4.6 percent for all public pension funds tracked by Wilshire TUCS….

He recalls attending a dinner with hedge fund executives one evening last fall in New York, when he was asked to sit next to a centerfold model. And on another visit to New York, Mr. Loftis says, he found himself with a hedge fund group in a banquette at the Provocateur, at the stylish Hotel Gansevoort, where bottles of liquor were passed around the table. (He says he personally paid his share of the bill.)…

Mr. Loftis decided to take a closer look at the fees charged by just one of the state’s dozens of outside fund managers. The examination reduced the state’s fees by $18.1 million, Mr. Loftis said. He added that the fund manager called the difference a “reporting error.”

“When I go to Cracker Barrel for lunch, you give them $8, and they give you lunch and a receipt,” Mr. Loftis said. “But in this world, we’re prepared to pay millions of dollars in fees at somebody else’s word, and we ought to do better than that.”

Needless to say, private equity and hedge fund managers are big political donors, and having Loftis as an effective watchdog is bad for their business in South Carolina, and in their mind, sets a dangerous precedent. So it should be no surprise that the knives are out.

Regular readers will know from our work in California that letters, calls, and e-mails to state officials are very productive. In that much larger state, NC readers played a big role in pressuring state Treasurer John Chiang into sponsoring path-breaking private equity legislation. Elected officials like Chiang rarely get missives on anything other than the hot topic of the day. Well-written ones get their attention because the sender is not only informed but clearly motivated and articulate enough to sway colleagues, friends, and family.

So please, if you are in South Carolina or have people you know in that state, please write or encourage your contacts to write the officials below. Tell them that what the Joint Committee on Pension Systems Review is proposing to do by stripping Loftis of his authority is a naked power grab clearly designed to end effective pension oversight. It would represent a giant step backwards and would harm state taxpayers and employees. Tell them you intend to watch their vote and will urge everyone you know in the state if they vote for corruption and against Loftis.

E-mails are best due to ability to present a lot of detail plus speed of delivery. But if you or your contacts don’t have time to pen a good missive, or can’t readily get an e-mail in those cases where you need to call to get an e-mail address, please call and give a pointed message. Be polite but firm.

Letters to the editor and alerting local newspaper reporters and television stations will also apply pressure. If you have ideas and contact information, please provide it in comments.

Please circulate this post widely. Thanks again for your efforts.