In the US, the cost of the aftermath of the crisis has fallen heavily on young people, mainly due to bad policy responses to the crisis that we’ve described at length as it was happening: the failure to restructure bad loans (particularly mortgages) and impose costs on banks and investors, not just homeowners; the refusal to engage in enough fiscal spending, not just during the crisis but in deficit fights during the Obama Administration. That isn’t to say that other groups haven’t suffered too. Remember that older, less educated whites have suffered a decline in lifespans, which is unheard in anything other than post-USSR economic collapse. And even though some people in their 50s and 60s are sitting pretty, virtually all the ones I know outside McKinsey and top Wall Street circles are looking at working till they drop.

But young people have suffered in a very large way and don’t have any reason to expect much improvement. And the impact on them of diminished earnings early in their career is more serious than taking a hit for a similarly long period later in one’s working life. Various studies have found that lower earnings at the start of one’s career lead to diminished lifetime earnings.

Reader UserFriendly flagged two disheartening sightings on how young adults are suffering. As we’ll see, the report from Fortune is directionally correct in showing how much lower typical incomes are for young people now versus in the 1980s. However, they over-egged the pudding by taking a period of time that ended with pre-recession peak incomes that it took the better part of a decade to reach again.

I also do not like the Boomer versus Millennial framing in that it implies Boomers were responsible for Reagan-era policies. Deregulation and the Fed crushing labor started in the Carter era, although Reagan cemented neoliberalism as the dominant ideology. The so-called “Greatest Generation” backed Reagan. The propensity to vote for Reagan correlated extremely highly with incomes. Needless to say, the oldest Boomer voters in 1980 would have been 25, which is too young to be very well off, save perhaps by inheritance. Boomers did not vote in Reagan; when you look at the breakdown by age cohort, it was not until you got to 30 year old and over groups that you saw Reagan getting the majority vote (interestingly, young people then also voted more heavily for Anderson than their elders).

Nevertheless, young adults had a good run in Reagan years before the nasty hangover of the 1990-1991 recession kicked in. From Fortune, summarizing a report by a group called the Young Invincibles, using Fed data:

While this does not break down income by age group, this chart illustrates how using 1989 as the basis for comparison over-eggs the pudding, since it was the peak year in a strong recovery after a severe recession (the Fred chart is interactive, so if you visit the site, you can see the values for each year. Unfortunately, the series does not go back before 1984): 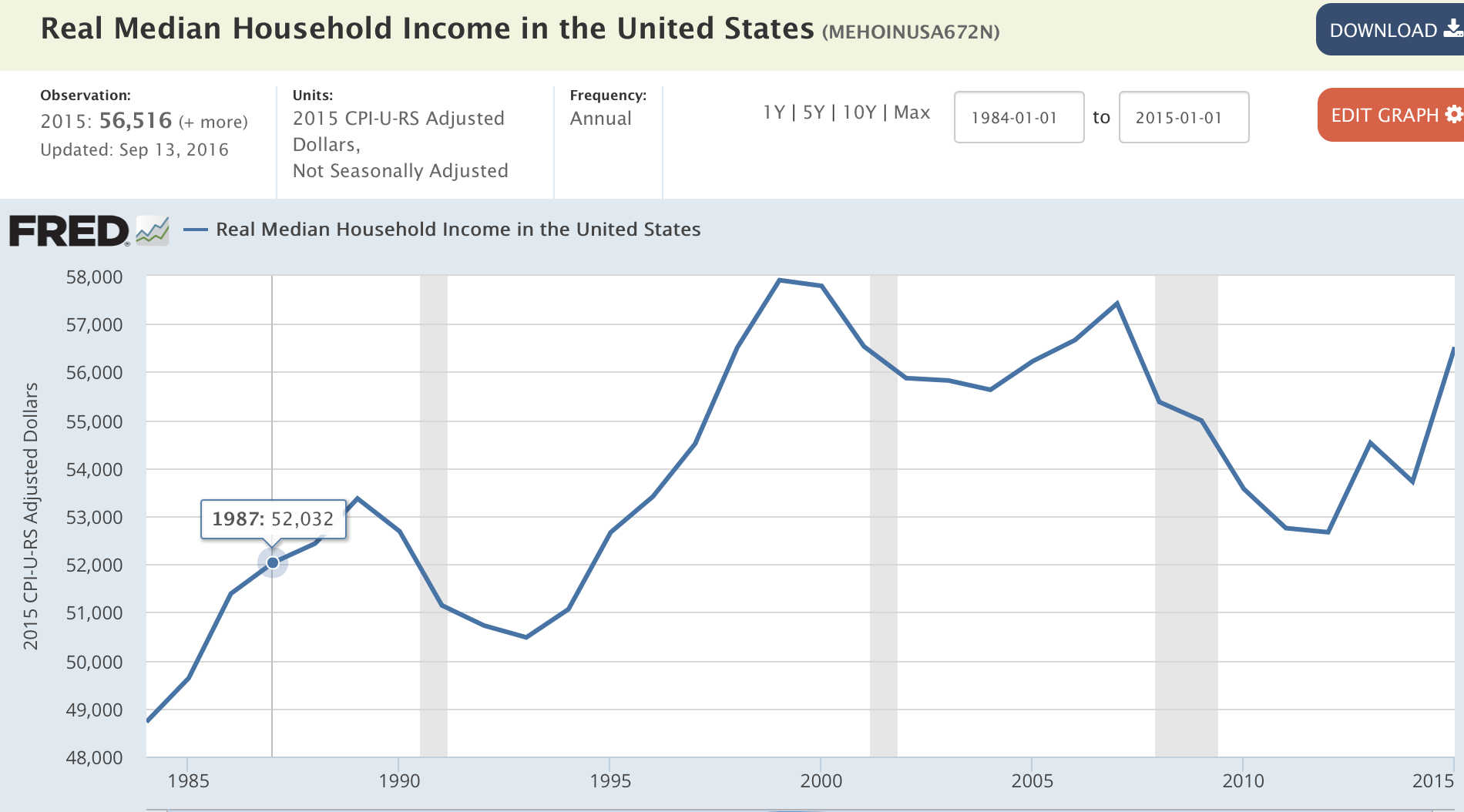 Needless to say, one of the factors driving the lackluster post 2007 results is the lousy quality of jobs. 94% of the new jobs created in the Obama era were part-time or temporary.

The lack of a steady job makes it hard to save for a down payment and hard to have enough in the way of steady earnings to qualify for a mortgage. And in our society, where the property rights of tenants are generally poor (unlike some other societies) and landlords can and do raise rents aggressively, owning real estate historically was the way that the middle class accumulated wealth for retirement. The 30 year mortgage matched the typical productive earning years of the (male) head of the household. When he retired, he would own his house rent free and face much lower costs, or could move into a smaller home and free up equity. Housing was a tax-advantaged forced savings vehicle; the traditional model provided a wealth buffer for retirees even when real estate appreciated only at its long-term historical level of a mere 0.5% real price growth per year.

The resolution of the crisis again turned the old model on its ear. Housing before the crisis was at strained valuations in relationship to average incomes and rentals. Yet the priority after the crisis was to restore home prices to their former levels. Now in fact, outcomes have varied considerably, with the top 10% communities that have done well in the “recovery” seeing turbo charged home price gains (which in New York, San Francisco, and increasingly other major cities have been amplified by Russian and Chinese flight capital).

These high average prices have had a secondary effect: the McMansionization of what used to be starter homes. I see this in Birmingham, Alabama where my mother lives in an affluent suburb with the best school district in the state. Most of the houses near her are 1950s ranch or split-level homes, and when sold, they are either razed or have big additions made to them. Down the hill, a somewhat busy street was clearly one of the first to be developed, and when my parents moved there in the 1970s, it was full of nicely maintained classic 1940s starter homes on small plots. There are still a very few left, but when they are sold, they are replaced with new structures with at least double the old square footage of living space that max out the available land.

As a Washington Post story indicates, it isn’t just the terrible state of the incomes and balance sheets of the young that are keeping them from owning homes; it’s also that modest homes are going the way of the dinosaur. Key points from the article:

Here’s a look at some of the ways that home buying is becoming more difficult for young buyers:

1. More deals are falling through. The share of home sales that fail is on the rise, with more issues arising for people buying starter homes, according to a report released this week by Trulia…The fail rate was higher for starter homes, with 7 percent of deals falling through at the end of 2016…

New home buyers are more likely to face issues with their loans because they haven’t gone through the process and usually don’t have as much equity as older borrowers, [Felipe] Chacón [of Trulia]says. They are also more likely to be buying homes with loans secured by the Federal Housing Administration, which require smaller down payments but have more restrictions, he says.

2. They don’t have many options. One of the main challenges affecting all kinds of home buyers is that there is a shortage of homes on the market. Still, those shortages are growing most for low- and midpriced homes in many markets, according to Trulia. Inventory for starter homes fell by nearly 11 percent nationally at the end of last year when compared to the end of 2015, the company found. That compares to a drop of 6.5 percent for premium homes, or the priciest homes in the market…

3. More people are being priced out of the market. Mortgage rates have increased since the election, putting a squeeze on young home buyers. Rates for 30-year fixed-rate mortgages rose to 4.2 percent last week from about 3.4 percent at the beginning of October. Those higher mortgage rates pushed down the median mortgage that millennials can afford by 9 percent, according to a report released Thursday by Fitch Ratings.

It also doesn’t help that the list prices for starter homes are rising, according to Trulia, requiring bigger down payments. For aspiring buyers, that can mean having to move to a less-expensive area, or putting off the purchase until they have more cash in the bank.

As UserFriendly said by e-mail:

I know exactly who’s fault it is, that is half the problem. It’s like I live in a bubble because next to no one understands anything about economics and so many people only understand politics to the extent that the GOP is more racist and therefore always bad. It’s maddening. It’s especially maddening for people my age, who graduated in 2008. I’d say it’s a reasonable argument that between Clinton and Obama I am about $200k worse off than I would be. So are most of my peers. Which makes my blood boil when I see them cheer him.

I litteraly have no life to look forward to. Out of the 14 years of my adult life I don’t think there has been a single one where my debt load has decreased. Which is completely unsustainable but thanks to uncle joe there is nothing I can do about it.

The young are between student debt, background checks that result in anyone with even a minor incarceration record putting themselves at a big career disadvantage, and the surveillance state so hemmed in as to make it very unlikely that they will revolt. But the Soviet Union didn’t fail due to an internal uprising but due to its inefficiency, the erosion of its legitimacy and the withdrawal of support of its citizens. The US has massive, unsustainable military, higher education, and health expenses and no plan to reduce their growth, much less to shrink them. I’m not sure how this ends, but on current trajectories, it will end badly.