On 14 December 2016, in a widely predicted move, the US Federal Reserve announced that it is raising the federal funds rate by one quarter of a percentage point, taking its target band for short term interest rates to between 0.5 to 0.75 per cent. More importantly, it signalled a change in the stance of monetary policy, by suggesting that there are likely to be three more rate hikes over 2017, and predicting that the long term interest rate, which has been in decline, would rise to 3 per cent.

There has in recent times a growing consensus that the US Fed has continued with a loose monetary policy, with near zero interest rates and ample liquidity, for far too long. Low interest rates and large scale bond buying had led to asset price inflation that increased inequality and threatens another melt down in financial markets. Yet, each time the Fed was expected to reverse the low interest policy, it held back claiming that it feared it would abort a halting recovery from the Great Recession.

That fear has not gone away. While there is talk that the US economy has recovered enough to approach near-full employment with a tight job market, that view does not take account of the large numbers who had dropped out of the labour market during the recession and need to be brought back to restore pre-crisis employment levels. The real reason that the Fed has chosen this time to go the way it should on the interest rate front is the conviction that political circumstances have shifted focus from monetary to fiscal policy when it comes to spurring growth. The source of this conviction is the Trump campaign that promised to cut taxes and boost infrastructural spending to stimulate growth.

Trump’s victory based on an economic platform that promised such a stimulus, if implemented, would amount a major reversal in the macroeconomic stance adopted by developed county governments for quite some time now. Other than for a brief period immediately following the onset of the 2008 financial crisis, the stance adopted involved downplaying a proactive fiscal policy and emphasising the role of monetary policy in the form of infusion of cheap and easy money into the system to push debtfinanced private spending and growth. Trump claims that what needs to be done is to stimulate demand and incentivise private investment with tax cuts and drive growth and jobs with substantially enhanced infrastructural spending. The logic of how this strategy could be pushed without a runaway increase in federal deficits and public debt, which financial investors and many in Trump’s transition team would object to, is nowhere near clear. There is little reason to believe that Trump himself would want to displease finance capital by allowing deficits to widen, especially given his decision to appoint ex-Goldman Sachs partner and hedge-funds manager Steven Mnuchin as the Treasury Secretary in his administration.

That generates much uncertainty on what economic policy would really look like under the Trump administration. The Federal Reserve Chair Janet Yellen underlined this when she said that: “All the (Federal Open Market Committee) participants recognize that there is considerable uncertainty about how economic policies may change and what effect they may have on the economy.” Despite that uncertainty, and leveraging the evidence of recovery in the US, the Fed has clearly decided to hand 2 over the task of sustaining and building on that recovery to the fiscal policy that would be pursued by the Treasury under Donald Trump. There are no guarantees, however, that the Trump’s spending programme will be implemented and whether it will make any difference to the performance of the economy if it is.

The problem here is not only for the US. It is for the rest of the world economy— especially Europe and Japan that are still mired in recession and emerging markets that have lost their post-crisis buoyancy. The immediate impact of the rate hike has been continued strengthening of the dollar against all other currencies, extending the gains it has made when differential economic performance and the flight to safety had increased investments in dollar denominated assets. This trend has now gone far enough to take the euro to below 1.04 dollars per unit, reviving discussion of euro- dollar parity (Chart 1). Elsewhere, Japan has seen a considerable weakening the yen as well, reflecting similar tendencies. 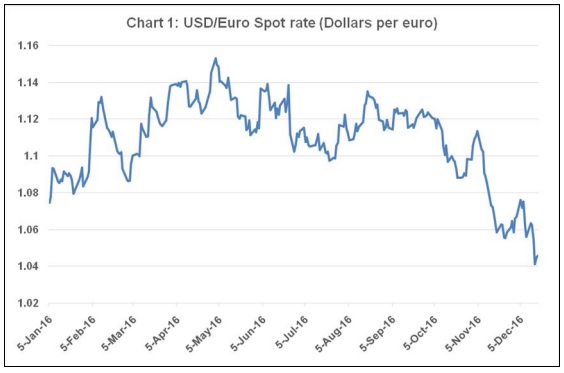 The trend to euro-dollar parity is the result of the contrary policy direction in the US and the Eurozone. While in the former moderate growth has led to a reversal of the low interest rate regime, in the latter, worsening economic conditions have led to the adoption of a negative nominal interest rate regime with multiple rounds of quantitative easing or loose monetary policy. The same is true of Japan, where the government is struggling to get inflation up to a targeted 2 per cent.

Under normal circumstances this should be a positive development for the slowly growing economies within the OECD, since a weakening currency relative to the dollar can make their exports more competitive. However, two factors are likely to limit this benefit. The first is that since currencies of countries outside the OECD are depreciating as well, the benefits of a strong dollar in terms of enhanced exports from counterparty countries could flow to them rather than the beleaguered European economies. Second is that having won an election on a platform that promised to increase jobs in America and keep them away from migrants, the Trump administration would be under pressure not to hand over the benefits of an improving economy to foreigners. If the rising dollar does lead to falling exports from the US, protectionism is a real possibility. That would only increase uncertainty in the world economy, as predictions of policies implying “de-globalisation” turn true.

That uncertainty is affecting the so called emerging market economies (EMEs) through a route that can be even more damaging. This is through a preemptive surge in net outflows of capital that are in some instances rapidly depleting reserves. A surprising case here is China, which appeared to be sitting pretty on the external front with large foreign exchange reserves, a current account surplus, and a strong currency. But ever since the one-off devaluation of the renminbi (RMB) in 2015, as part of an effort to achieve market economy status, internationalise the RMB and have it included in the SDR basket, there appears to be a loss of confidence in the stability of the currency. As a result, the RMB has been losing value relative to the dollar in recent times (Chart 2). That matters because external financial liberalisation has opened avenues for resident firms and individuals to transfer money and wealth out of the country into assets presumed to be safe. 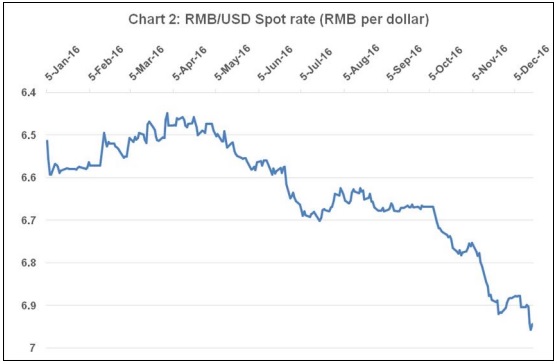 Thus, China now seems to be confronted with a situation of capital flight. Over the first 10 months of 2016, capital outflows from China totalled $530 billion. Foreign exchange reserves which had peaked at $3.99 trillion in January 2014, have fallen by from 3.23 trillion in January 2016 to 3.05 trillion in November (Chart 3). The government has responded with the imposition of capital controls, realising that the international context today is not best suited to efforts at globalisation including internationalisation of the renminbi. It has required approvals for purchase and repatriation of foreign exchange, including for payment of dividends to foreign investors. Curbs have been placed on gold imports and investments abroad in mergers and acquisitions are under scrutiny. Clearly de-globalisation is not a phenomenon restricted to either the UK after the Brexit vote or the US after the rise of Trump. 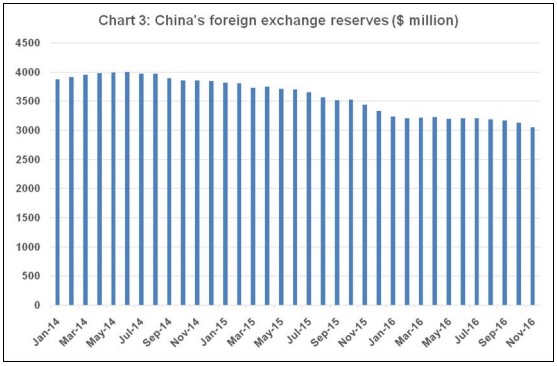 For those in each of the world’s nations who have suffered much from the loss of sovereignty and domestic policy space, this trend should be welcome. But what the process of transition would imply is extremely uncertain, with indications that its costs can be substantial.