By Naked Capitalism reader aliteralmind, aka Jeff Epstein. Jeff, a progressive activist and journalist, was one of only around forty candidates in the county to be personally endorsed by Bernie Sanders, and was a pledged delegate for him at the DNC. Jeff is also currently starring in Feel The Bern-The Musical, which will very soon be performed in New York. Originally posted on Citizens’ Media TV

(This is my first issue-opinion video. With thanks especially to Adryenn Ashley and Jimmy Dore for the inspiration. All sources and supporting evidence is below.) Within hours of becoming the 45th President of the United States, one of Donald Trump’s first orders of business was to sign an executive order to “raise mortgage insurance rates” on millions of homeowners, by around $500 a year.

But while it is technically true that Trump did sign the order reversing the decrease, it is a misleading picture. This story is more a negative reflection on President Obama than it is on Trump.

Generally speaking, if you are a first time homebuyer and purchase a house with a down payment of less than 20% of the home’s worth, you are required to purchase mortgage insurance. This insurance is to protect the the lender in case you default on your payments.

As you pay off your principal, this number goes down.

The Obama administration’s reduction of the annual premium rate is .25 points (the upfront premium remains unchanged). So with the same loan above, your annual premium would instead be $1,045.

The criticism of Trump for this move has been unrelenting and, at least in my internet bubble, unanimous. I have not seen any criticism of the Obama administration at all; including by, disappointingly, one of my primary sources of news, The Young Turks. (Can’t find the video at the moment, but they briefly criticized Trump for the move, without looking further into the issue.)

As reported by USA Today:

“In one of his first acts as president, President Trump made it harder for Americans to afford a mortgage,” he said. “What a terrible thing to do to homeowners. … Actions speak louder than words.”

As reported by Bloomberg:

“This action is completely out of alignment with President Trump’s words about having the government work for the people,” said John Taylor, president of the National Community Reinvestment Coalition, through a spokesman. “Exactly how does raising the cost of buying a home help average people?”

Sarah Edelman, director of housing policy for the left-leaning Center for American Progress, in an e-mail wrote, “On Day 1, the president has turned his back on middle-class families — this decision effectively takes $500 out of the pocketbooks of families that were planning to buy a home in 2017. This is not the way to build a strong economy.”

And one of the many strong criticisms as documented by Common Dreams:

“Donald Trump’s inaugural speech proclaimed he will govern for the people, instead of the political elite,” [Liz Ryan Murray, policy director for national grassroots advocacy group People’s Action] said. “But minutes after giving this speech, he gave Wall Street a big gift at the expense of everyday people. Trump may talk a populist game, but policies like this make life better for hedge fund managers and big bankers like his nominee for Treasury, Steven Mnuchin, not for everyday people.” 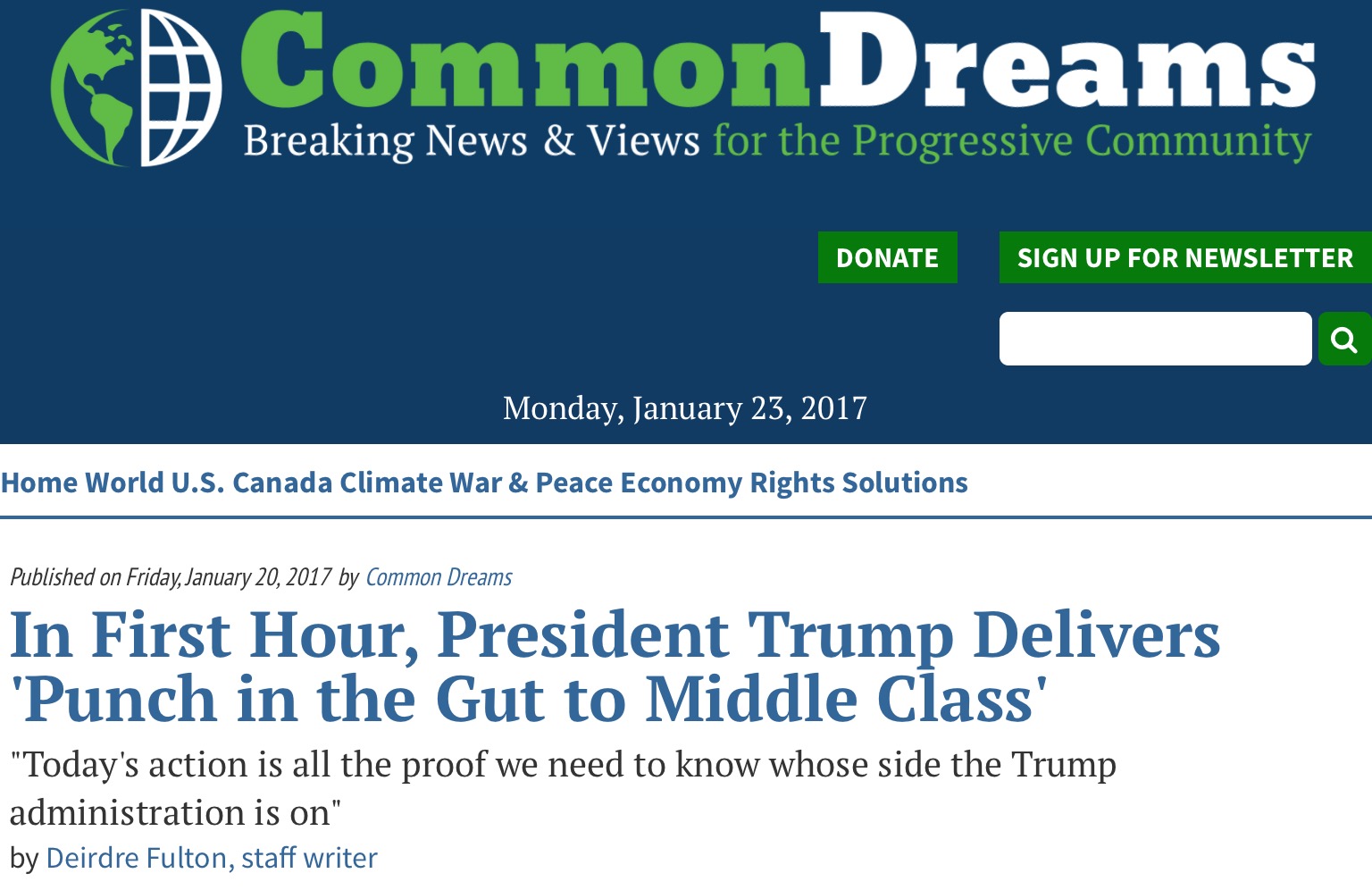 To say that Trump took savings away from the neediest of homebuyers is not true, because homebuyers never had the savings to begin with. The rate reduction was not announced until January 9 of this year–11 days before the end of Obama’s eight year term–and was not set to take effect until January 27, a full week after Trump was sworn in.

(Here’s the PDF from the FHA, of Trump’s suspension announcement.)

In addition, Obama’s reduction decision seems to have been made without any advance notice or even a projection document justifying the decrease. As I understand it, both of these things are unusual with a change of this magnitude.

Finally, with the announcement made little more than a week before the new administration was to be sworn in, and despite Trump being entirely responsible for implementing this change, the incoming administration was not consulted.

Now that the timing is clear, Time Magazine’s coverage is particularly misleading:

Trump, who claimed a populist mantle in his first speech as a president, signed the executive order less than an hour after leaving the inaugural stage. It reverses an Obama-era policy.

“Obama-era policy” implies the reduction was made long ago, and has been in force for much of that time. 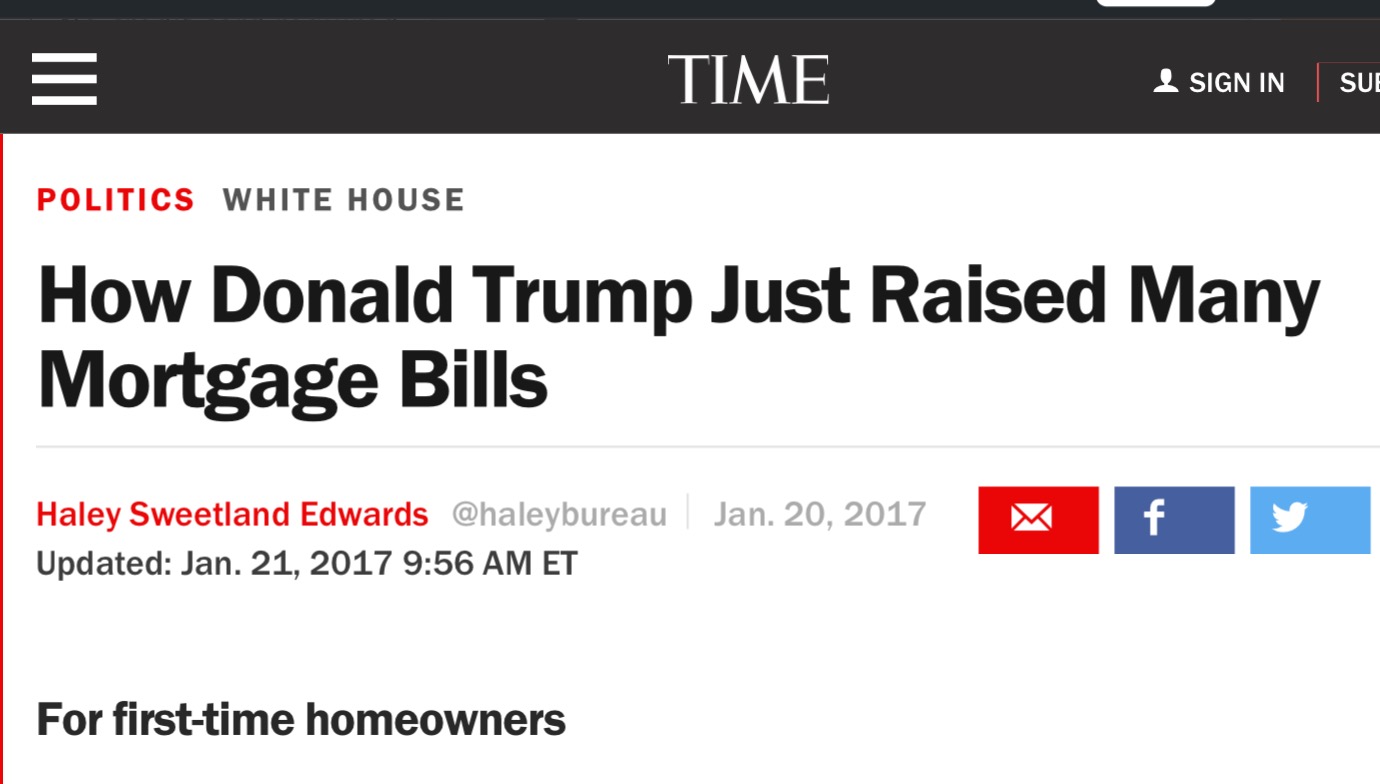 (Rates can’t be raised if they were never lowered.)

Conclusion: It Was a Set Up

Finally. After eight years of hard work and multiple requests, your boss approaches you on a Monday morning and says, “Good news! Starting in two weeks, I’m giving you a raise. Congratulations.”

Two days later, you find out that he decided to leave the company months ago, and his final day is Friday. Your raise doesn’t start until a week after that.

You ask him about your new boss. “Well, he’s a pretty strict guy.” He leans in, puts the back of his hand to the side of his mouth, lowers his voice, and continues, “Honesty, I hear he is a bit difficult to work with. Real penny pincher.” He sits up, his voice back to its normal cadence, “But don’t worry. I’m leaving a note on his desk telling him just how important this raise is to you and your family.” He stands up and slaps you on the back as he walks away. “I’m sure he’ll keep my word.”

If that were me, I would be upset at my new boss, but I would be furious at my old one. He had eight years to do something.

This was nothing more than an opportunistic political maneuver by the outgoing president, to set the incoming president up for failure. All while pretending to care about American homeowners. If the President Obama really wanted to help Americans, he would’ve considered this move–or something similar–long ago. Instead, he told them he was giving them a gift and promised that it would be delivered by Trump, knowing full well that he would never follow through. Lower-income Americans were used as pawns in a cheap political game.

Further confirming my theory, here is what was said when the reduction was originally announced:

“The Trump administration would be accused on day one of raising mortgage costs for average Americans if it reverses the FHA move,” analyst Jaret Seiberg, managing director at Cowen Group Inc., wrote in a note to clients. “Trump’s career has been real estate. It would seem out of character for him to be aggressively negative on real estate in his first week in office.” […]

“I have no reason to believe this will be scaled back,” [HUD Secretary Julian] Castro told reporters. The premium cut “offers a good benefit to hardworking American families out there at a time when interest rates might well continue to go up.”

There are so many things for progressives to criticize Trump about. This is not one of them.

So Who Are We Fighting Anyway?

To paraphrase Jimmy Dore, “The way to oppose Trump is to agree with him when he’s right, and to fight him when he’s wrong. Anything else delegitimizes you, especially in the eyes of his supporters.”

If we can’t win with the truth, we don’t deserve to win.