Even though the U.S. Army Corp and the Obama Administration denied a key easementneeded to complete the Dakota Access Pipeline (DAPL) last month, the struggle against the controversial pipeline is far from over.

North Dakota’s new Republican Gov. Doug Burgum has reaffirmed his favor of the project, telling Reuters that he is confident that the pipeline will be approved by Donald Trumpwhen he comes into the White House.

“I expect the world’s going to change dramatically on that day relative to finding resolution on this issue,” Burgum said. “I would expect that (Energy Transfer Partners, DAPL’s parent company) will get its easement and it will go through.”

Burgum has requested that the demonstrators clean up the protest camps near the Standing Rock Sioux Reservation before spring floods from rain and melting snow create a “potential ecological disaster.”

According to Reuters, more than 300 vehicles, along with dozens of temporary dwellings and other detritus, have been abandoned at the encampment, with at least one campsite sitting on a flood plain. 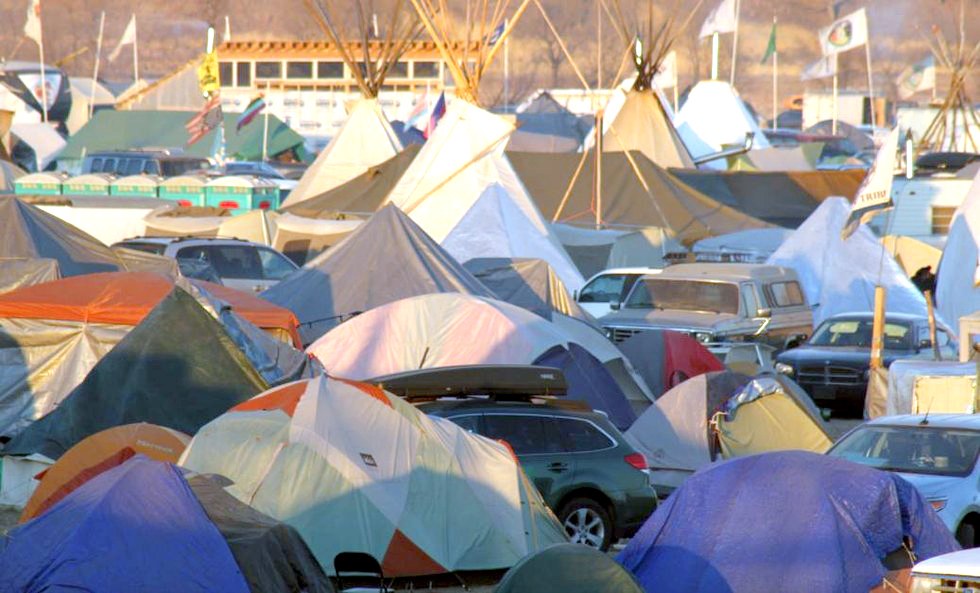 “The amount of cleanup that needs to take place is enormous,” Burgum said. “We’ve got a potential ecological disaster if this land floods and all the debris flows downstream into tribal lands.”

About 700 to 1,000 pipeline protesters remain at the Oceti Sakowin camp even though Tribal Chairman Dave Archambault II’s has requested them to leave due to the harsh winter conditions. The chairman said the pipeline fight will continue in court.

Burgum, a former tech executive who won the governors race with nearly 77 percent of the vote, took office last month as tensions mounted between DAPL protesters and law enforcement officials surrounding the $3.8 billion oil project. In November, police used items such as tear gas and water cannons to disperse protesters in freezing temperatures.

The protests have been ongoing since last spring. The Standing Rock Sioux and their supporters say the 1,100-mile pipeline, which crosses the Missouri River and sacred sites, threatens their access to clean water and violates Native American treaty rights.

Proponents of the DAPL, which is expected to transport 470,000 barrels of Bakken crude oil per day, say the pipeline is the safest and most environmentally friendly way to transport the fuel.

The Army Corps announced on Dec. 4 that it will not provide the necessary easement and recommended an environmental impact statement (EIS) considering the Tribe’s treaty rights and route alternatives to the Lake Oahe crossing.

But in a video message released just 24 hours after taking office, Burgum criticized the Obama Administration for “politically [stalling] a legally permitted project that had already been through an exhaustive review process and has twice been upheld by the federal courts.

“I support the legal completion of this pipeline. Make no mistake, this infrastructure is good for our economy. And it’s the safest way to transport North Dakota products. Failure to finish it would send a chilling signal to those in any industry who wish invest in our state and play by the rules.”

Dakota Access is adamant about completing the pipeline. The company has filed a lawsuit against the Army Corps claiming it had all the permits and permissions it required in order to complete a critical crossing at Lake Oahe.

In response, both the Army Corps and the Standing Rock Sioux filed a motion with the U.S. District Court in Washington, DC, on Friday asking the judge to throw out the company’s lawsuit.

The Army Corps states in its brief to the court that the company’s claim should be dismissed, the Bismarck Tribune reported.

“There is no signed document conveying to Dakota Access an easement to construct a pipeline under Corps-managed land. The army is still considering (the) easement application,” the Army Corps told Federal Judge James Boasberg.

The tribe’s attorney, Jan Hasselman of Earthjustice, said that Dakota Access created its own mess.

“Its own choices—including building a significant portion of the pipeline before it had any permits and refusing to voluntarily cease construction in the disputed area around Lake Oahe, as the government repeatedly requested—are responsible for its current predicament,” Hasselman said.

A press release from the Standing Rock Sioux also states that the Army Corps has not, and could not have, issued the easement yet. It further adds that the Army Corps’ decision to provide a full EIS on route alternatives for the pipeline was legally required and appropriate “in light of the history of the Sioux.”

“DAPL’s lawsuit is a desperate attempt to bully the government into getting the easement and violating Standing Rock’s rights,” Archambault said. “It will not succeed. We look forward to working with the Corps on an EIS that fully takes into account our history and our rights, and are confident that the easement at Lake Oahe will ultimately be denied.”