By John Upton, who blogs about ecology. Originally published at Climate Central

The lawns of homes purchased this year in vast swaths of coastal America could regularly be underwater before the mortgage has even been paid off, with new research showing high tide flooding could become nearly incessant in places within 30 years.

Such floods could occur several times a week on average by 2045 along the mid-Atlantic coastline, where seas have been rising faster than nearly anywhere else, and where lands are sagging under the weight of geological changes.

Washington and Annapolis, Md. could see more than 120 high tide floods every year by 2045, or one flood every three days, according to the study, published last week in the journal PLOS ONE. That’s up from once-a-month flooding in mid-Atlantic regions now, which blocks roads and damages homes.

“The flooding would generally cluster around the new and full moons,” said Erika Spanger-Siegfried, a Union of Concerned Scientists analysts who helped produce the new study. “Many tide cycles in a row would bring flooding, this would peter out, and would then be followed by a string of tides without flooding.”

The analysis echoed findings from previous studies, though it stood out in part because of its focus on impacts that are expected within a generation — instead of, say, by the end of the century.

It showed high tide floods along southeastern shorelines are expected to strike nearly as often as they will in the mid-Atlantic, portending a fast-looming crisis for more than 1,000 miles of coastal America.

Seas have recently been rising worldwide by an average of about an inch a decade, a rate of change that’s accelerating as global warming expands oceans and causes ice to melt. The East Coast endured sea level rise at more than twice the global rate from 2002 to 2014. 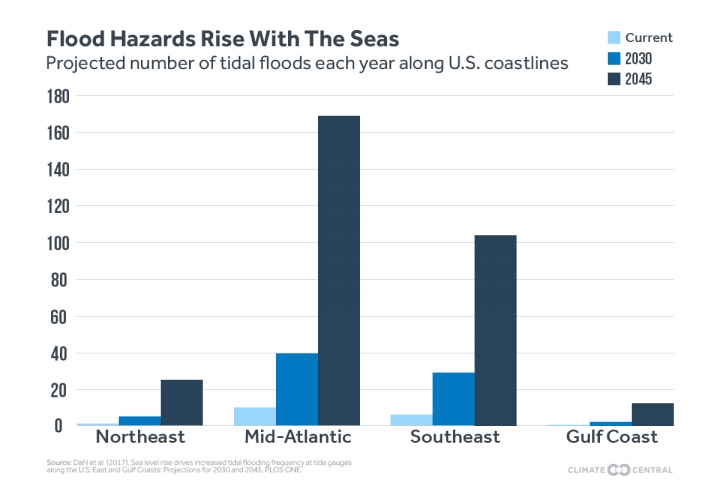 “The way to bring it home is to talk about this 30-year horizon,” said Jason Evans, a Stetson University scientist who researches sea-level rise and advises coastal communities trying to adapt. He wasn’t involved with the new study. “That’s the life of a mortgage. It’s not abstract.”

High tide flooding will be less common along the northeastern and Gulf coasts, but flooding in those regions is projected to occur more frequently in the decades ahead than is currently the case in vulnerable mid-Atlantic cities and towns. Gulf Coast communities are also grappling with widespread erosion caused by oil and gas infrastructure and flood control projects.

The study did not analyze the West Coast, where flooding problems are less widespread, although parts of the San Francisco Bay Area are highly vulnerable.

The analysis pointed to heavy future impacts from rising seas if coastal communities fail to adapt to climate change and if the world fails to substantially reduce greenhouse gas pollution from fossil fuels, deforestation and farming.

“The analysis presented here indicates that flood risk is likely to increase significantly and consistently for regions from the Gulf of Mexico to the Northeast,” said Andra Garner, a sea-level researcher at Rutgers who wasn’t involved with the study. “This emphasizes the urgent need for adaptation.”

Work is underway in many coastal states, counties and cities to reduce flooding and its impacts, such as by raising roads and blocking construction of flood-prone homes. Adapting to rising seas can be painstaking and expensive, however, often requiring extensive coordination among agencies and governments.

In some cases, residential lots, roads and parks are expected to be abandoned to the sea. That already happened in some parts of New York and New Jersey affected by Hurricane Sandy. 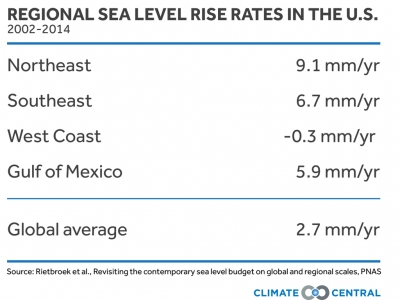 “This is not something that we can address alone,” said Theodore Becker, mayor of Lewes, Del., a town of a few thousand residents that swells with summertime visitors.

The new analysis showed high tides could bring floods to Lewes every second day on average by 2045 — a risk that local and state leaders are toiling to reduce.

“We engage in at least two programs to educate people about what they can do to prepare themselves,” Becker said. “We have a very engaged community. They get it.”

To reduce future risks and impacts from current flooding, Lewes lawmakers recently adopted new rules for building and renovating homes in flood-prone regions. The city is also seeking funding from the state to elevate roads that frequently flood. It protects and enhances sand dunes, which can buffer floods.

“Lewes is an interesting example of a fairly proactive community in terms of sea level rise preparedness,” said California-based climate scientist Kristina Dahl, one of the authors of the new study.

“The stuff that’s happening in Lewes is statewide — there’s a lot of action within Delaware and a lot of awareness,” Dahl said. “A lot of the things that are being done there could be looked at by a lot of other coastal communities and used as models.”