Innovation is a key driver of economic growth, and the patent system is one of the main instruments governments use to foster innovation. However, there is growing concern that dominant companies might use patents strategically to deny potential entrants – often small, technology-oriented start-ups – access to key technologies in an attempt to keep out competitors.1 As start-ups are thought to generate more radical innovations than established firms, this practice may harm technological progress and economic growth.

The growth of technology companies and their aggressive behaviour in patent disputes has raised concerns that patents in the hands of big business might be harmful to innovation. According to The New York Times, patents are used in the technology industry as “swords” to put pressure on competitors (Duhigg and Lohr 2012), and The Economist (2015) observed that “[p]atents should spur bursts of innovation; instead, they are used to lock in incumbents’ advantages”. Many critics have called for antitrust policies as a remedy to this problem, arguing that it is time that antitrust policy puts innovation front and centre (Wu 2012, Waller and Sag 2014).2

In a recent research project, we explore whether patents held by a dominant firm are harmful for follow-on innovation, and if so, whether antitrust enforcement in the form of compulsory licensing of patents provides an effective remedy (Watzinger et al. 2017).

The Antitrust Lawsuit Against Bell

To answer these questions, we study one of the most important antitrust rulings in US history, namely, the 1956 consent decree against the Bell System. This decree settled a seven-year old antitrust lawsuit that sought to break up the Bell System, the dominant provider of telecommunications services in the US, because it allegedly monopolised “the manufacture, distribution, and sale of telephones, telephone apparatus and equipment” (Antitrust Subcommittee 1958: 1668). Bell was charged with having foreclosed competitors from the market for telecommunications equipment because its operating companies had exclusive supply contracts with its manufacturing subsidiary Western Electric and because it used exclusionary practices such as the refusal to license its patents.

The consent decree contained two main remedies. The Bell System was obligated to license all its patents royalty free, and it was barred from entering any industry other than telecommunications. As a consequence, 7,820 patents, or 1.3% of all unexpired US patents, in a wide range of fields became freely available in 1956. Most of these patents covered technologies from the Bell Laboratories (Bell Labs), the research subsidiary of the Bell System, arguably the most innovative industrial laboratory in the world at the time. The Bell Labs produced path-breaking innovations in telecommunications such as cellular telephone technology or the first transatlantic telephone cable. But as Figure 1 shows, 58% of Bell’s patent portfolio had its main application outside of telecommunications because of Bell’s part in the war effort in WWII and its commitment to basic science. Researchers at Bell Labs are credited for the invention of the transistor, the solar cell, and the laser, among other things. 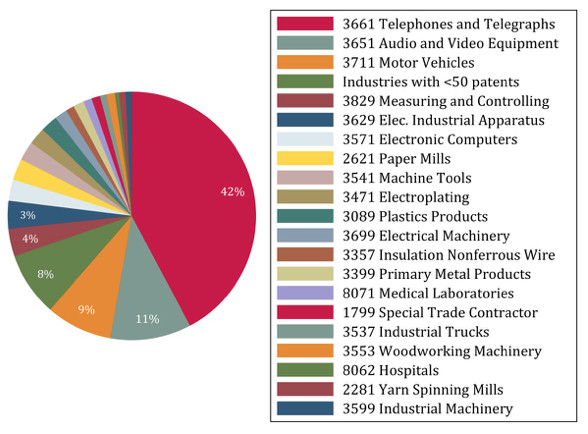 The broad patent portfolio of Bell gives us the opportunity to measure how the effect of compulsory licensing depends on the competitive setting. In the telecommunications industry, Bell was a vertically integrated monopolist who allegedly foreclosed rivals. In the industries outside of telecommunications, Bell held patents but was not an active market participant.

More than two-thirds of the increase in innovation can be attributed to young and small companies and individual inventors unrelated to Bell. This is in line with the hypothesis that patents can act as a barrier to entry for small and young companies who are less able to strike licensing deals than large firms (Lanjouw and Schankerman 2004, Galasso 2012, Galasso and Schankerman 2015). Compulsory licensing removed this barrier in markets outside the telecommunications industry, arguably unintentionally so. This fostered follow-on innovation by young and small companies and contributed to long run technological progress in the US.

Compulsory Licensing Did Not End Market Foreclosure in the Telecommunications Industry

The aim of the antitrust settlement was to increase competition and innovation in the telecommunications industry. We do not find this to be the case. In Figure 2 we compare the increase in innovations for patents sorted by how close the technology of these patents is to the telecommunications industry. The size of the bubbles represents the size of the patent portfolio of Bell in each technology. We find that almost all innovation increases come from patents that have nothing to do with telecommunications. This suggests that compulsory licensing is not an effective remedy to end market foreclosure.

This pattern is consistent with historical records that Bell continued to use exclusionary practices in the telecommunications industry after the consent decree took effect and that these exclusionary practices impeded innovation (Wu 2012). As no structural remedies were imposed Bell continued to control not only the production of telephone equipment but was – in the form of the Bell operating companies – also its own customer. This made competing with Bell in the telecommunications equipment market unattractive even after compulsory licensing facilitated access to Bell’s technology. For example, the Bell operating companies refused to connect any telephone that was not produced by Western Electric, the manufacturing subsidiary of the Bell System (Temin and Galambos 1987: 222). In other industries, compulsory licensing was effective in fostering innovation by young and small companies since Bell as the supplier of technology did not control the product markets through vertical integration or via exclusive contracts. 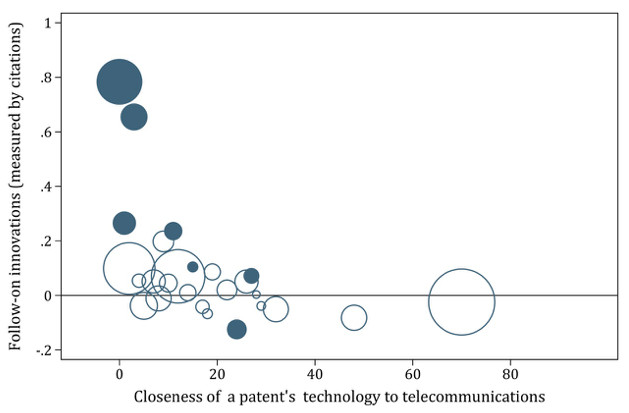 The Consent Decree Increased US Innovation in the Long Run

Although the 1956 consent decree was not effective in ending market foreclosure, it permanently increased the scale of US innovation. In the first five years alone, the number of patents increased by 25% in fields with compulsorily licensed patents compared to technologically similar fields without; and it continued to increase thereafter. This increase is again driven by small and new companies outside the telecommunications industry. We find only a small increase in patents related to the production of telecommunications equipment. This indicates that market foreclosure may slow down technological progress.

Outside the telecommunications industry, however, the consent decree had a long-lasting stimulating effect. By providing free state-of-the-art technology to all US companies, compulsory licensing increased US innovation because it opened up new markets for a large number of entrants. This interpretation is consistent with historical accounts. Gordon Moore, the co-founder of Intel, stated that “[o]ne of the most important developments for the commercial semiconductor industry (…) was the antitrust suit filed against [the Bell System] in 1949 (…) which allowed the merchant semiconductor industry “to really get started” in the United States (…) [T]here is a direct connection between the liberal licensing policies of Bell Labs and people such as Gordon Teal leaving Bell Labs to start Texas Instruments and William Shockley doing the same thing to start, with the support of Beckman Instruments, Shockley Semiconductor in Palo Alto. This (…) started the growth of Silicon Valley” (Wessner et al 2001: 86). Similarly, Peter Grindley and David Teece opined that “[AT&T’s licensing policy shaped by antitrust policy] remains one of the most unheralded contributions to economic development – possibly far exceeding the Marshall plan in terms of wealth generation it established abroad and in the United States“ (Grindley and Teece 1997).

Our research highlights that patents held by a dominant firm can be harmful for follow-on innovation. Compulsory licensing can help to foster market entry and stimulate innovation in the short and the long run. Yet, if a dominant company can use other exclusionary practices to keep out innovative start-ups, compulsory licensing is ineffective. This suggests that an antitrust policy concerned with innovation should recognise exclusion as a core concern of competition policy and put the protection of market entrants front and centre.