Tillerson’s views on China and the South China Sea territory appear even more concerning against the backdrop of recently aired comments made by Trump’s increasingly powerful chief strategist, Steve Bannon, that the two nations were headed toward war in the next five to 10 years, as reported by the Independent (UK). However, what Tillerson did not reveal in his answers is that Exxon, as well as Russian state-owned companies Gazprom and Rosneft, have been angling to tap into the South China Sea’s offshore oil and gas bounty.

“We’re going to have to send China a clear signal that, first, the island-building stops,” Tillerson said at his hearing, speaking of the man-made islands China’s military has created in the South China Sea and uses as a military base. “And second, your access to those islands also is not going to be allowed.”

Tillerson, who came under fire during his hearing for maintaining close business ties with Russian President Vladimir Putin, was asked for further clarification on what he thinks the U.S. posture toward China should be in one of dozens of questions sent to him by Sen. Ben Cardin (D-MD). In responding, Tillerson spelled out the bellicose stance he believes the U.S. should take toward China, a country Trump has often said should be handled with a metaphorical iron fist. Sean Spicer, White House Press Secretary and Communications Director, echoed this in a recent press briefing, stating that, “The U.S. is going to make sure that we protect our interests there.”

“It’s a question of if those islands are in fact in international waters and not part of China proper, then yeah, we’re going to make sure that we defend international territories from being taken over by one country,” said Spicer.

While President Barack Obama and Secretary of State Hillary Clinton took a rather hawkish U.S. foreign policy stance toward China known as the Pacific “pivot,” these developments under the new administration appear to take tensions with China to a new level.

The Chinese government sees the Trump White House and Tillerson’s recent statements, if carried out, as an act of “war” toward the country, which Beijing says would not be allowed to stand unchallenged.

A DeSmog investigation shows that “our interests” (to quote Spicer) overlap suspiciously often with those of ExxonMobil, Gazprom, and Rosneft.

Exxon’s offshore oil and gas ties in the region circle the South China Sea from Vietnam and the Philippines to Indonesia and Malaysia. Gazprom also maintains business ties with Vietnam. While most western oil majors have veered away from tapping into this oil and gas, Exxon has not shied away.

“Unlike other Western oil majors, which have usually taken a wait-and-see approach when drilling in the disputed waters, ExxonMobil appeared unfazed by the political uncertainty in the region and maintained extensive business links with almost every Southeast Asian country,” wrote the South China Morning Post. 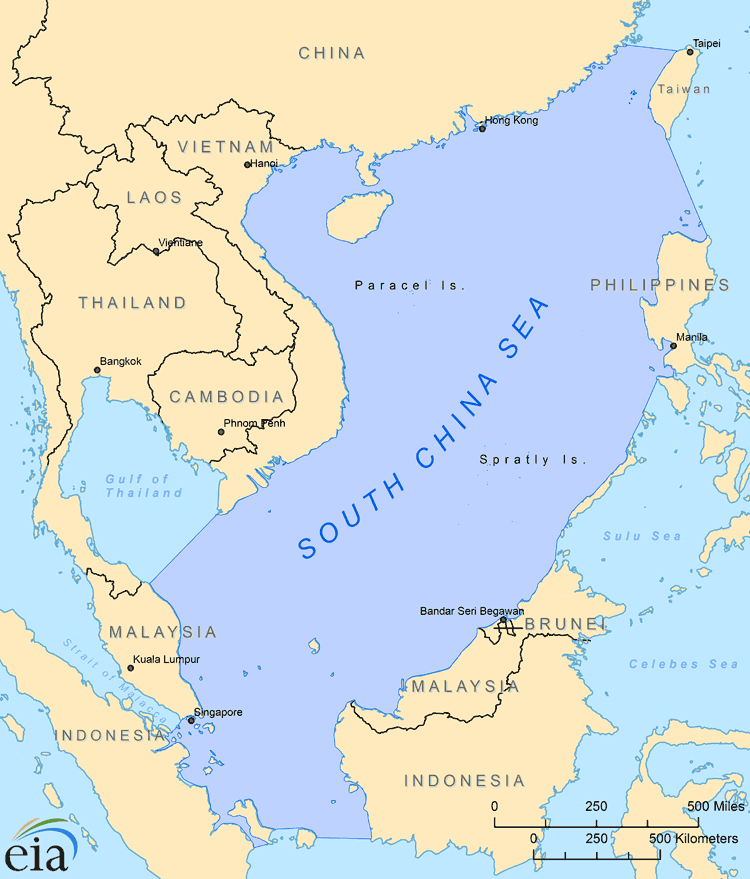 On January 12, the New York Times became the first news outlet to dig into Exxon’s bounty of South China Sea offshore oil and gas and how it could possibly relate to Tillerson’s hardline views on the disputed territory there.

“What is also not clear is the extent to which Mr. Tillerson’s tough stance on the South China Sea springs from his extensive experience in the region during his time as chief executive of Exxon Mobil, when his company became embroiled in bitter territorial disputes over the extensive oil and gas reserves beneath the seafloor,” wrote the Times. “During his tenure, the company forged close ties to the Vietnamese government, signing an agreement in 2009 with a state-owned firm to drill for oil and gas in two areas in the South China Sea.”

That agreement was completed with a “quiet signing given sensitivities with China,” according to a State Department cable published by Wikileaks. ExxonMobil Vietnam’s then-President Russ Berkoben told the State Department that “although EM is uncertain of China’s reaction, it is ready if China reacts,” according to the cable. The deal made Exxon the largest offshore acreage holder in Vietnam, with 14 million acres to explore and tap into.

In 2008, the South China Morning Post reported that Exxon had “been approached by Chinese envoys and told to pull out of preliminary oil deals with Vietnam.” Vietnam stood its ground, telling China that Exxon and other companies had a right to drill in its territorial sea under its laws.

Three years later in 2011, Exxon said it had “encountered hydrocarbons” in the area during its exploratory drilling in a company statement. China reacted with fury, moving its own state-owned oil platform, belonging to China National Offshore Oil Corporation (CONOC), to the same area in 2014.

U.S. Secretary of State at the time John Kerry called CONOC‘s move “aggressive” and “provocative,” with the Chinese Foreign Minister Wang Yi telling Kerry to “speak and act cautiously” on the issue.

On January 13, PetroVietnam and Exxon announced a $10 billion deal to build a natural gas power plant in the country, set to be sourced with the gas Exxon will tap from the South China Sea via the Ca Voi Xanh offshore field. Exxon will also ship the gas to Vietnam via one of its underwater pipelines.

PetroVietnam also has a joint venture with the Russian state-owned company Gazprom; it goes by the name VietGazprom. Together, they operate five offshore blocks in the South China Sea.

Gazprom began negotiations to buy a 49 percent stake in Vietnam’s sole oil refinery, the Dung Quat refinery, in April 2015 but walked away from the potential deal in January 2016.

Rosneft, the Russian state-owned company which maintains close business ties with Exxon, also has skin in the game for offshore drilling in Vietnam through its subsidiary Rosneft Vietnam. The project is Rosneft’s first international offshore project.

“The implementation of projects in Vietnam is one of the priority [sic] of Rosneft’s international strategy,” said Rosneft CEOIgor Sechin, a close ally of Putin, of the project in a March 2016 press release. “The development of offshore fields in one of the most dynamically growing Asia-Pacific region country is a remarkable example of high-tech cooperation with our partners … We appreciate not only the current progress of joint projects implementation in Vietnam, but also the future prospects for their development.”

Rosneft and PetroVietnam signed a joint cooperation agreement in May 2016, which includes but is not limited to offshore drilling, that will further bolster the ties between Rosneft and Vietnam in the South China Sea.

“The agreement provides for the expansion of cooperation between the parties in Russia, Vietnam and third countries in the area of hydrocarbon exploration and production (including offshore), processing, commerce and logistics, as well as staff training,” reads a Rosneft press release. “The parties agreed to consider potential options for joint projects and define the basic terms of cooperation as well as establish a working group for each of the areas of cooperation.”

Rosneft also co-owns the underwater Nam Con Son Pipeline on a 32.7 percent basis through its subsidiary Rosneft Vietnam Pipelines, which is also owned on a 51 percent basis by PetroVietnam.

In recent months, as with Vietnam, tensions have ratcheted up between Indonesia and China over the disputed territory in the South China Sea.

Exxon previously had a stake in offshore wells in the Philippines in the South China Sea, which it sold in 2011 to Mitra Energy (now Jadestone Energy). Exxon decided to sell off the wells after it failed to produce commercial-scale levels of oil and gas.

“ExxonMobil drilled the four wells to test a new exploration play concept,” Exxon said in a statement in 2011. “While it encountered gas in three of the four wells drilled, non-commercial quantities of gas were found and ExxonMobil will withdraw from [the project] and resign as the operator.”

In 2014, Exxon expressed interest in the Philippines’ offshore reserves up for offer once again, according to an official statement made by the Philippines Department of Energy (DOE). But that bid did not go anywhere, with the DOEsuspending all oil and gas exploration in the area due to the territorial dispute with China.

A decade later in March 2013, Exxon began production in Malaysia’s South China Sea-based Telok offshore gas basin, a project it co-owns on a 50-50 basis with PETRONAS.

Exxon began phase two of Telok with PETRONAS in 2014, with the two projects together making up 15 percent of the country’s oil production and half its natural gas output. That same year, Exxon signed another $2.6 billion 50-50 ownership stake deal with PETRONAS for an enhanced oil recovery project in the South China Sea.

“Exxon’s Malaysian subsidiary operates 34 platforms in 12 fields and has an interest in another 10 platforms in five fields in the South China Sea,” reported the Houston Chronicle, putting the enhanced oil recovery project deal into context. “Those fields supply about 20 percent of Malaysia’s crude oil output and condensate and 50 percent of Peninsular Malaysia’s natural gas needs.”

Today, Tillerson has sold all of his Exxon stock, which normally would have been deferred to him over a period of time post-retirement. Sen. Ed Markey (D-MA) recently said he worries Tillerson will see the world through “oil-coated glasses,” given Exxon’s multicontinental reach to every continent on the planet besides Antarctica.

But as the South China Sea shows, even if not dealing directly with oil and gas reserves, “black gold” can still loom large when considering geopolitical and foreign policy negotiations. Some believe Tillerson, from that vantage point, is a fatally flawed choice.

“The proportion of Tillerson’s job that would have the appearance of conflict is just enormous,” David Arkush, managing director for Public Citizen’s climate program, recently told Bloomberg. “If someone has to recuse himself from that many matters, he has no business being in that role.”