By Steve Roth, publisher of EvonomicsAsymptosis, Angry Bear, and Seeking Alpha. Follow him on Twitter at @asymptosis. Originally published at Evonomics

Households save money and lend it to businesses, who invest it in productive enterprises. That’s the economic story you’ve been hearing your whole life, right? Or at least since Econ 101. Saving funds investment. That core idea is embedded (and unquestioned) in modern macro: the Solow growth model, IS/LM, the lot.

Put aside that the basic bookkeeping of this idea — that personal saving creates “savings” that “fund” lending and investment — doesn’t make any sense. (It’s an error of composition; you have more savings if you save, but the economy doesn’t.) Let’s look at history: when households save more, is there more lending and (business) investment — either immediately or a few quarters/years down the road?

Here are some saving, lending, and investment measures for the U.S., post-war (starting Q1 1948), all divided by GDP to make them comparable: 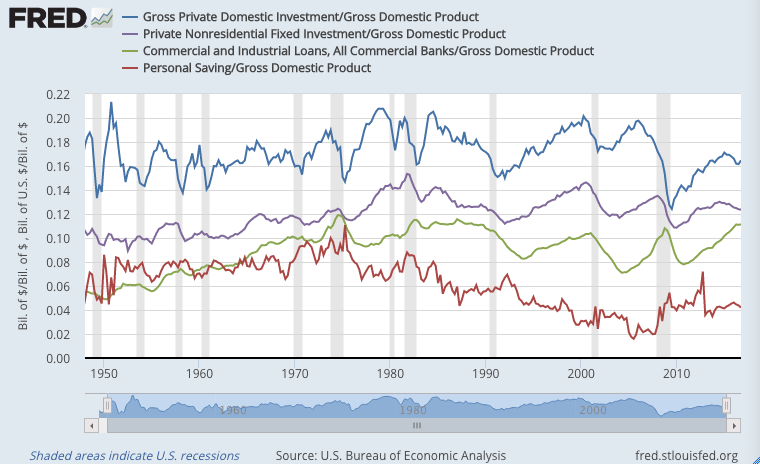 The first thing to notice here: both lending and investment are vastly larger than household saving. They can’t be “funded” by that saving, or at least not much. (Think: bank lending and endogenous money.)

Otherwise, eyeballing this, it’s pretty much impossible to tell if these measures are correlated. When saving goes up or down, do lending and investment do likewise (concurrently, or some time later)? They’re all over the place. So let’s use software to look at correlations between them.

• Personal saving and commercial lending seem to be lightly correlated. The correlation declines over the course of a year, but then increases two or three years out. It’s an odd pattern, with a lot of possible causal stories that might explain it.

• Personal saving and private investment (including both residential and business investment) are very weakly correlated, and what correlation there is is mostly negative. More saving correlates with less investment.

• Commercial lending has medium-strong correlation with private investment in the short term, declining rapidly over time. This is not terribly surprising. But it has nothing to do with private saving.

• Perhaps the most telling result here: Personal saving has a significant and quite consistent negative correlation with business investment. Again: more saving, less investment. This directly contradicts what you learned in Econ 101.

I’ll leave my gentle readers to ponder those only-somewhat stylized facts. Here’s the spreadsheet for any who want to explore further.