Yves here. Notice how the authors stress how squaring up Brexit accounts is less important than other issues the UK and EU need to sort out. It’s also almost certainly less complex. Yet look at what “less complex” amounts to.

By Zsolt Darvas, a Research Fellow at the Institute of Economics of the Hungarian Academy of Sciences and Associate Professor at the Corvinus University of Budapest,Konstantinos Efstathiou, a Research Assistant at Bruegel, and Inês Goncalves Raposo, a Research Intern at Bruegel. Originally published at Bruegel

Is Brexit a divorce, or is the UK leaving a club? This is the first question to answer as negotatiors discuss the key aspects of the EU-UK financial settlement. The authors present various scenarios, and find that the UK could be expected to pay between €25.4 billion and €65.1 billion. But the final cost can only be calculated after extensive political negotiations.

Negotiations over the Brexit bill, the expected payment by the United Kingdom to settle its financial commitments when it leaves the EU, are likely to be contentious and attract vivid public attention. In fact, this financial settlement is the least important economic issue in the Brexit negotiations, as we argue in our new paper breaking down this Brexit bill. From an economic perspective, future arrangements for trade, financial services and labour mobility between the EU and the UK are much more important.

Nevertheless a conditional agreement at least on the methodology for calculating the Brexit bill could be a prerequisite for more meaningful discussions on the new EU-UK economic relationship. To bring transparency to the debate and to foster a quick agreement on the bill, our paper makes a comprehensive attempt to quantify all the various assets and liabilities that might factor in the financial settlement. Since the paper is rather long, we summarise our key findings in some blog posts. Largely data-based posts look at EU assets and EU liabilities. But in this blogpost we put the two sides together and raise twelve questions which negotiators need to answer in order to calculate the bill.

When someone joins a club, like a gym, she is not asked to make a lump-sum payment for a share in the assets of the club. So when a member leaves the club, she may not claim any part of the assets, like a share of the changing room or fitness equipment. However, if the member committed to a certain period of membership, the membership fee should be paid up to the end of that period.

The EU is of course much more complicated than a fitness club, but the analogy has merits. The “EU is a club” model would suggest that the UK may not claim a share of the EU’s assets, but would still have to pay for the commitments to which it agreed. In contrast, if Brexit is considered as a divorce, then all assets and liabilities should be split.

For both the club membership cancellation and divorce approaches, a key question is how we define the period for which the UK has committed to make contributions. This issue is particularly complicated given the special nature of EU budgeting, which includes planned payments and planned commitments, with the bulk of planned commitments made in a particular year deferred for payment in later years. (See our blog on EU liabilities for a more detailed discussion of this).

In 2013, the UK agreed to the EU’s seven year budget plan, the 2014-20 Multiannual Financial Framework (MFF). So perhaps all possible commitments which can be derived from the MFF should be included in the Brexit bill calculation. This is one option, but political discussions may consider other possible agreements. Some options are listed below, ordered from the largest Brexit bill to the lowest Brexit bill:

A futher issue is the fact that, when the UK agreed to the 2014-20 MFF, it did so in the belief that it would remain a member of the EU and benefit from EU membership. Therefore, the degree of the UK’s access to the EU single market after Brexit, and other elements of the new EU-UK relationship, might also be factors to consider when answering the question above.

There are two possible rebates after Brexit:

Since in 2018 the UK will still be a full EU member, we cannot see any good reason for the UK not to benefit from a rebate on those payments.

The rebate on post-Brexit UK contributions to the EU budget might perhaps be an issue for discussion. It could be argued that the rebate was an unfair reduction in the UK’s contribution to EU budgets and since unanimity would have been needed to change it, it was politically impossible to change. But once the UK is out of the EU, that rebate should be removed.

However, it could also be argued that the rebate was part of the rules governing the EU budget. Thus, if the UK is asked to contribute to post-Brexit EU budgets according to current rules, the current rules regulating the rebate should apply.

A further twist is that the possible rebate on the EU’s post-Brexit EU budget contributions also depends on the way the UK’s share of EU commitments is calculated. If a rebate-adjusted UK share is used (the 12%), then that calculation already considers the rebates the UK received in the past, so an additional rebate would amount to double-counting. But if the UK’s share is calculated on the basis of past gross contributions without a rebate adjustment (the 15.7%), then a rebate could be justified.

Of the total €580 billion post-Brexit EU spending plans, €28.9 billion is planned to be spent in the UK. This could be considered as factor offsetting UK payments in the Brexit bill.

If spending plans are maintained, according to the current MFF, then the UK would contribute €69.6 billion to post-Brexit spending commitments (if its share is 12%) and then benefit from €28.9 billion of EU spending in 2019-25. If these planned expenditures are netted out, then the UK’s contribution is reduced to €40.7 billion (€69.6 minus €28.9) and all €28.9 billion of post-Brexit EU spending plans in the UK should be dropped. This choice does not alter the net Brexit bill, but it does have important implications about UK participation in EU activities.

Such a question might be important for the UK government. However, since the UK as a country is leaving the EU, in our calculations we consider the UK as a whole.

The regulation says that “Member States shall jointly guarantee payment of such benefits”. One possible interpretation is that once the UK leaves the EU, it will no longer be a guarantor and therefore it should not contribute. Another view could be that the UK should contribute to the pensions of British citizens only.

One possibility is that the UK pays for all the liabilities and commitments in one big payment close to the Brexit date. On the other hand, various EU’s spending commitments are scheduled to be paid in 2019-25, and the UK might contribute annually when the expenditures are due.

For example, Ireland received a financial assistance loan from the EU, which is expected to be repaid by 2042. This loan, and all other EU financial assistance loans are fully matched by EU borrowing. These loans are assets, while EU borrowing is a liability. We presume that Ireland will not default on its loans from the EU, but this will be known with certainty only after Ireland has fully repaid. The expenses from EU contingent liabilities will also only be known several years from now. There are a number of options for taking into account assets and liabilities that have a degree of contingency:

b. The UK does not pay anything upfront, but pays a share of losses in the future, if a loss on a particular liability materialises.

c. The UK pays the estimated expected loss from these contingent liabilities, without any later clearing.

d. The UK pays the estimated expected loss from these contingent liabilities, but the EU and the UK later settle any deviation between the actual loss and the expected loss.

e. The EU balance sheet includes a €2.0 billion guarantee fund for external actions. This asset, or a part of it, would not be considered in the Brexit bill, but the UK would receive its share from its unused part only in later years. If this fund proves to be insufficient to cover actual losses, the UK will pay a share.

According to the EU’s staff regulations, one-third of pension costs should be paid by EU staff members. So approximately one-third of pension rights acquired by EU staff up until the Brexit date will be paid by future EU employees – of course, only if the EU will continue to exits and therefore there will be future EU employees. This payment could be considered as an offsetting factor in the Brexit bill. Its consideration can be analogous to the first two options of the previous point:

a. The net UK payment upon Brexit is not reduced by one-third of pension rights, but the UK is gradually reimbursed as EU employees pay their contributions;

b. The net UK payment on Brexit is reduced by one-third of pension rights, but if for any reason the EU dissolves, the UK will contribute to those pension rights which were earned during the UK’s EU membership.

The twelve questions above highlight that the size of the Brexit bill will depend on fundamental political compromises and choices. Depending on the results of these political discussions, very different Brexit bills might arise.

In order to quantify the impact of some of the choices, we now present some scenarios based on various assumptions about (1) ‘leaving the club’ vs ‘divorce’, (2) UK shares of 12 percent (rebate adjusted gross contribution) or 15.7 percent (gross contribution without rebate), (3) different scopes of financial commitments, (4) differences between upfront gross payments and later reimbursements by the EU, (5) netting out or not of EU spending in the UK after Brexit.

Table 1 summarises EU liabilities and claims at the end of 2018 (the closest year-end date to a probable Brexit date in March 2019) and the UK’s gross contributions to these. Table 2 shows the assets. Table 3 presents some scenarios for the net Brexit bill. Depending on the scenario, the long-run net Brexit bill could range from €25.4 billion to €65.1 billion, possibly with a large upfront UK payment followed by significant EU reimbursements later.

Of course, these scenarios are not exhaustive, and many other scenarios could be thought of, depending on the answers given to the twelve questions above. 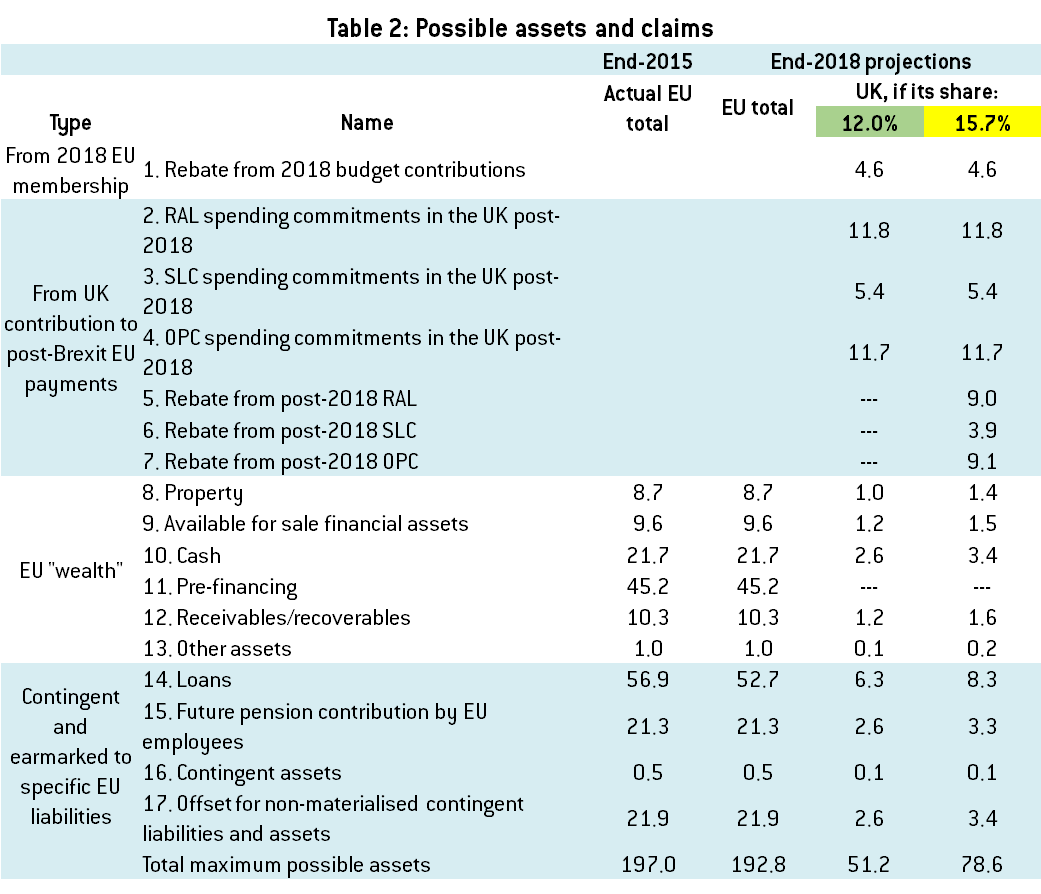 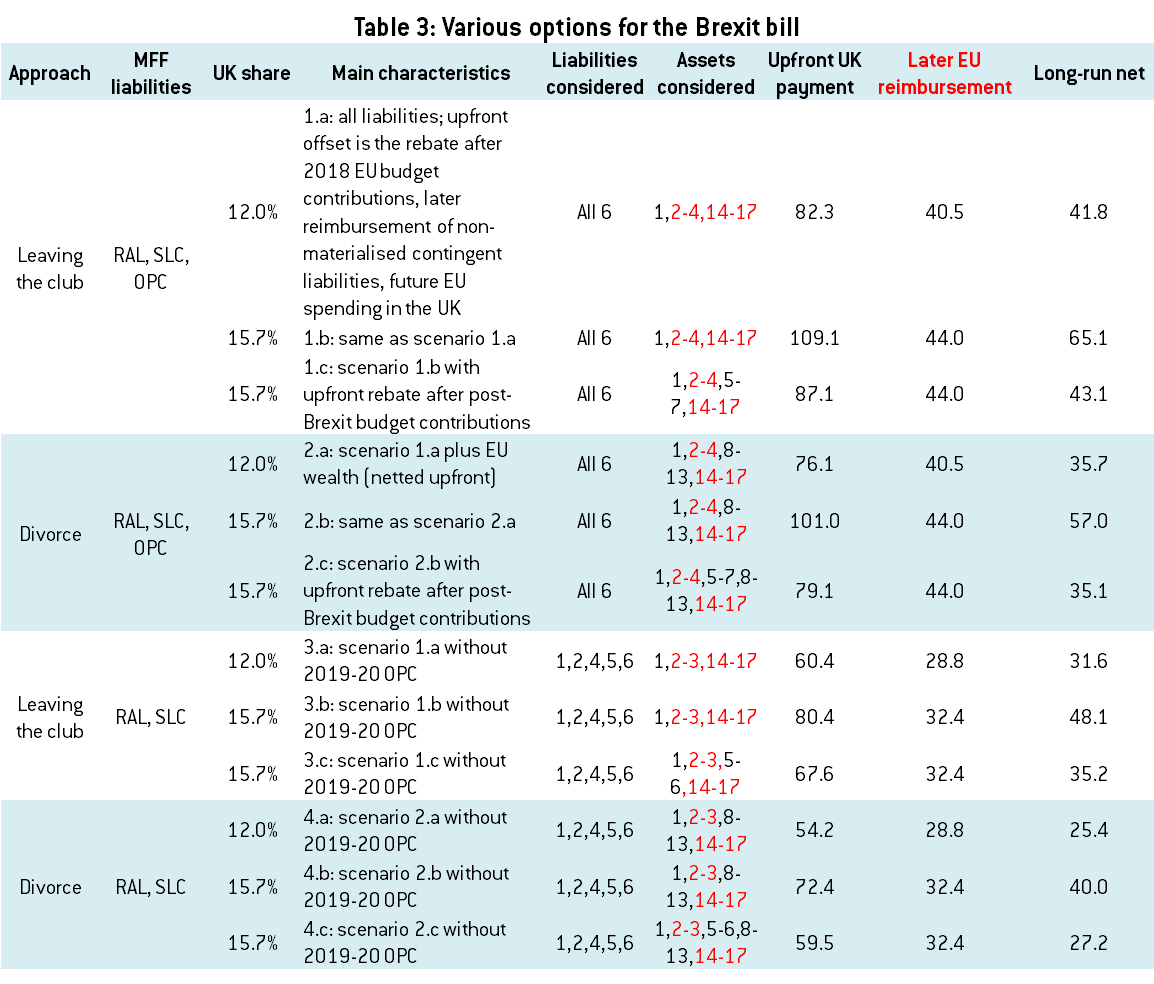 Note: the numbers in columns for liabilities and assets considered refer to the numbers in tables 1 and 2 above. Black numbers indicate that the particular liability or assets is netted-out upfront, while numbers in red indicate assets/claims which will be reimbursed by the EU to the UK in later years. The long-run net amount calculations simply subtract future EU reimbursement from the upfront UK payment, without considering the time-value of money. Depending on choices, the timing of UK payments to the EU, EU reimbursements to the UK, and items to be considered for netting out can be different from the assumptions implied by the table, without impacting the long-run net amount. 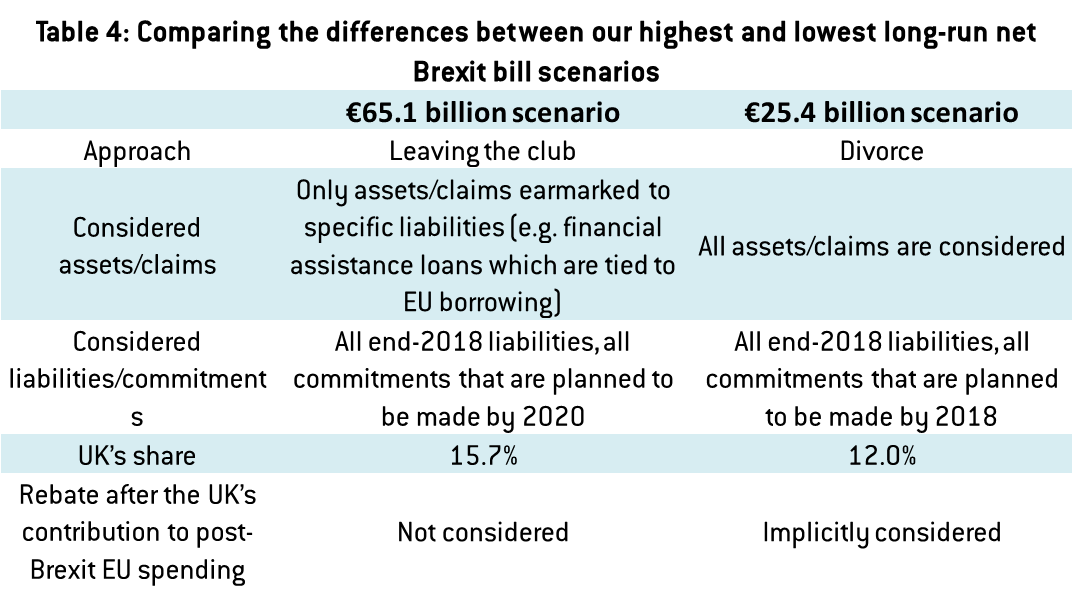