Yves here. The article underlying this post addresses one of the arguments made to claim that inequality in the US isn’t as bad as the widely-discussed figures make it out to be, as if other evidence, like the extent of private jet use and the explosion in high end housing prices, isn’t a major indicator. The nay-sayers argue that US taxes and transfer are redistributive and adjusting for them makes thing look less bad. While the data assembled by Piketty, Saez, and Zuc does show that to be true, it also shows that inequality is nevertheless rising strongly.

Another issue not addressed, and it would be too thorny to work through in a satisfactory way, is that transfers are far from the sum total of government spending. Basically, these economists have been forced to add back the type of government expenditure that ameliorates inequality. But as readers know, much of government spending is socialism for the rich, but it benefits corporations, and then flows back to individuals via executive comp, higher fees for service providers, and stock market gains. One tax expert argues that while US taxes are progressive, spending overall is regressive, and you net out with a government that overall does not do much in the way of distribution. While that is based on observation (and that includes of the ugly details of the Federal budget) it sounds roughly correct.

The rise of economic inequality is one of the most hotly debated issues today in the US (Furman 2016) and indeed in the world. Yet economists and policymakers alike face important limitations when trying to measure and understand the rise of inequality.

One major problem is the disconnect between macroeconomics and the study of economic inequality. Macroeconomics relies on national accounts data to study the growth of national income, while the study of inequality relies on individual or household income, survey, and tax data. Ideally all three sets of data should be consistent, but they are not. The total flow of income reported by households in survey or tax data adds up to barely 60% of the national income recorded in the national accounts, with this gap increasing over the past several decades.1

This disconnect between the different data sets makes it hard to address important economic and policy questions, such as:

A second major issue is that economists and policymakers do not have a comprehensive view of how government programmes designed to ameliorate the worst effects of economic inequality actually affect inequality. Americans share almost one-third of the fruits of economic output (via taxes that help pay for an array of social services) through their federal, state, and local governments. These taxes collectively add up to about 30% of national income, and are used to fund transfers and public goods that ultimately benefit all US families. Yet we do not have a clear measure of how the distribution of pre-tax income differs from the distribution of income after taxes are levied and after government spending is taken into account. This makes it hard to assess the extent to which governments make income growth more equal.2

In our paper, we calculate the distribution of both pre-tax and post-tax income. The post-tax series deducts all taxes and then adds back all transfers and public spending so that both pre-tax and post-tax incomes add up to national income. This allows us to provide the first comprehensive view of how government redistribution in the US affects inequality. Our benchmark series use the adult individual as the unit of observation and split income equally among spouses in married couples. But we also produce series where each spouse is assigned their own labour income, allowing us to study gender inequality and its impact on overall income inequality. In this column, we would like to highlight three striking findings.

Our First Finding: A Surge in Income Inequality

First, our data show that the bottom half of the income distribution in the US has been completely shut off from economic growth since the 1970s. From 1980 to 2014, average national income per adult grew by 61% in the US, yet the average pre-tax income of the bottom 50% of individual income earners stagnated at about $16,000 per adult after adjusting for inflation.4 In contrast, income skyrocketed at the top of the income distribution, rising 121% for the top 10%, 205% for the top 1%, and 636% for the top 0.001% (see Figures 1 and 2.) 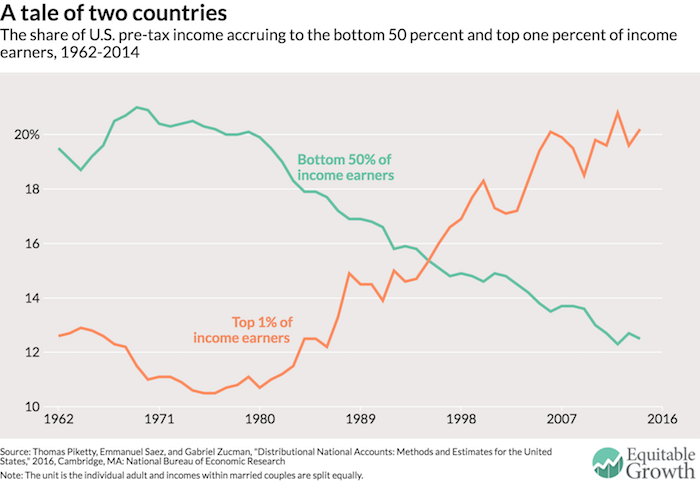 It’s a tale of two countries. For the 117 million US adults in the bottom half of the income distribution, growth has been non-existent for a generation, while at the top of the ladder it has been extraordinarily strong. And this stagnation of national income accruing at the bottom is not due to population ageing. Quite the contrary: for the bottom half of the working-age population (adults below 65), income has actually fallen. In the bottom half of the distribution, only the income of the elderly is rising.5 From 1980 to 2014, for example, none of the growth in per-adult national income went to the bottom 50%, while 32% went to the middle class (defined as adults between the median and the 90th percentile), 68% to the top 10%, and 36% to the top 1%. An economy that fails to deliver growth for half of its people for an entire generation is bound to generate discontent with the status quo and a rejection of establishment politics.

To understand how unequal the US is today, consider the following fact. In 1980, adults in the top 1% earned on average 27 times more than bottom 50% of adults. Today they earn 81 times more. This ratio of 1 to 81 is similar to the gap between the average income in the US and the average income in the world’s poorest countries, among them the war-torn Democratic Republic of Congo, Central African Republic, and Burundi. Another alarming trend evident in this data is that the increase in income concentration at the top in the US over the past 15 years is due to a boom in capital income. It looks like the working rich who drove the upsurge in income concentration in the 1980s and 1990s are either retiring to live off their capital income or passing their fortunes onto heirs.

Our second main finding is that government redistribution has offset only a small fraction of the increase in pre-tax inequality. As shown in Figure 1, the average post-tax income of the bottom 50% of adults increased by only 21% between 1980 and 2014, much less than average national income. This meagre increase comes with two important limits.

Our Third Finding: Comparing Income Inequality Among Countries Is Enlightening

Third, an advantage of our new series is that it allows us to directly compare income across countries. Our long-term goal is to create distributional national accounts for as many countries as possible; all the results will be made available online on the World Wealth and Income Database. One example of the value of these efforts is to compare the average bottom 50% pre-tax incomes in the US and France.7 In sharp contrast with the US, in France the bottom 50% of real (inflation-adjusted) pre-tax incomes grew by 32% from 1980 to 2014, at approximately the same rate as national income per adult. While the bottom 50% of incomes were 11% lower in France than in the US in 1980, they are now 16% higher (see Figure 3). 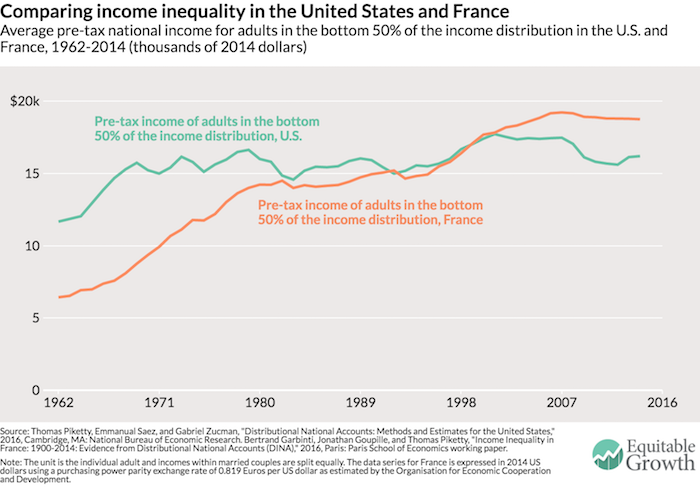 The diverging trends in the distribution of pre-tax income across France and the US – two advanced economies subject to the same forces of technological progress and globalisation – show that working-class incomes are not bound to stagnate in Western countries. In the US, the stagnation of bottom 50% of incomes and the upsurge in the top 1% coincided with drastically reduced progressive taxation, widespread deregulation of industries and services (particularly the financial services industry), weakened unions, and an eroding minimum wage.

Given the generation-long stagnation of the pre-tax incomes among the bottom 50% of wage earners in the US, we feel that the policy discussion at the federal, state, and local levels should focus on how to equalise the distribution of human capital, financial capital, and bargaining power rather than merely the redistribution of national income after taxes. Policies that could raise the pre-tax incomes of the bottom 50% of income earners could include:

The different levels of government in the US today obviously have the power to make income distribution more unequal, but they also have the power to make economic growth in the US more equitable again. Potentially pro-growth economic policies should always be discussed alongside their consequences for the distribution of national income and concrete ways to mitigate their unequalising effects. We hope that the distributional national accounts we present today can prove to be useful for such policy evaluations.

We will post online our complete distributional national accounts micro-data. These micro-files make it possible for researchers, journalists, policymakers, and any interested user to compute a wide array of distributional statistics – income, wealth, taxes paid and transfers received by age, gender, marital status, and other measures – and to simulate the distributional consequences of tax and transfer reforms in the US.