Recent global trade growth is even more disappointing than global GDP growth. This column argues that this unexpected weakness of trade relative to GDP is related to the high volatility and pro-cyclicality of real trade flows, and that cyclical forces are the main drivers. It also shows that the accuracy of existing trade forecasts can be improved using real-time data on business conditions.

In 2016, global trade growth fell short of expectations for the sixth year in a row (Figure 1), fuelling a debate that resembles that on the Great Trade Collapse of 2008 and 2009 (Baldwin 2009). As with that debate, the recent dismal performance of trade has been attributed to structural factors such as the resurgence of protectionism, retrenchment of global value chains, the weakness of trade credit, and possible geographic or sectoral composition effects (Borin and Mancini 2015, Hoekman 2016, IRC Trade Task Force 2016). 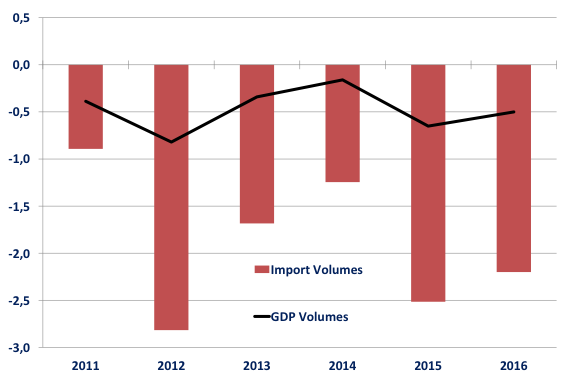 The IMF estimated world trade volumes to grow at an annual average of 5.1% in 2011-2016, but their actual growth rate has been just 3.2% per year. Only one third of this systematic forecast error reflects lower-than-expected real GDP growth. The other two-thirds is explained by the fall of the income elasticity of trade (‘income elasticity’), defined as the ratio between real import growth and real GDP growth. Income elasticity has decreased from its historical average of 1.3, as implicit in the IMF’s forecasts to less than 1.0.1

In a new paper we show, however, that due to two standard properties of real trade flows – their high volatility and their pro-cyclicality – income elasticity is itself a cyclical variable (Borin et al. 2017). In particular, when real GDP growth is positive but lower than its long-run trend, then the income elasticity of trade is also smaller than its long-run trend. This is important because it suggests that part of the decline in the income elasticity may be due to poor business conditions. Once this is factored in, we find that cyclical forces explain most of the current weakness of trade. In addition, we show that, by using real-time data on business conditions, the accuracy of forecasts on trade growth – like those produced by the IMF – can be significantly improved.

Trade Weakness: The Cycle and the Trend

Our research highlights the importance of income elasticity and shows, empirically and theoretically, that it is affected by business conditions.[2] At the empirical level we find a robust positive correlation with business cycle proxies (our preferred one being real investment growth).3 At a theoretical level, cyclicality arises because trade volumes are procyclical and more volatile than real GDP. The higher volatility of trade is, in turn, due to its different composition relative to GDP: trade is intensive in capital goods and manufactured goods, which are more volatile than consumption goods and services. Consumption goods and services, in turn, make up most of GDP and are less responsive to business conditions (think, for example, of public spending in education or health). Our paper demonstrates that this composition effect is responsible for the cyclical movements of the elasticity and drives it above (below) its trend following stronger (weaker) GDP growth.

From the theoretical model, we can identify two main components of the income elasticity:

Figure 2a shows that for the global economy both these components are currently declining, helping depress trade relative to GDP. The long-run component highlights that trade volumes increased faster than real GDP in the 1980s and early 1990s, favoured by the secular decline in tariffs and in information and transportation costs. Since the late 1990s, however, this component has started to decrease, as the effect of falling trade barriers began to fade away. The cyclical component, which has always fluctuated around the long-run component, is currently driving the income elasticity below 1 (the equilibrium level of the elasticity, if there are no changes in trade barriers), because world real GDP growth is weak (Figure 2b). 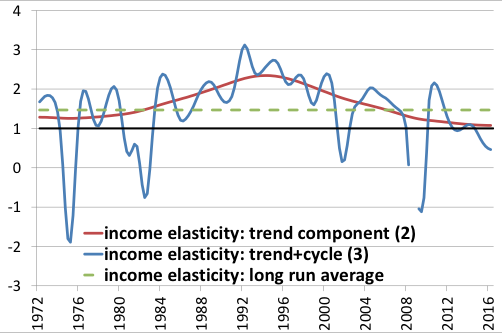 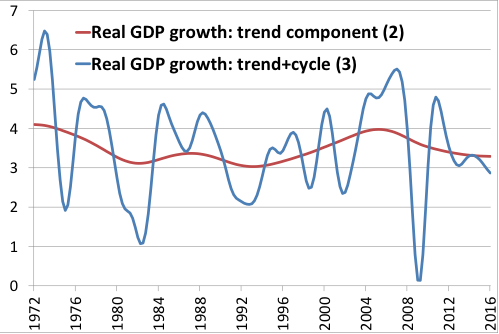 It is also worth noting that before the crisis (2002 to 2008) and in its immediate aftermath (Q3 2009 to Q2 2011), the cyclical component pushed the elasticity well above its long-run trend, hiding the fact that structural factors were already lowering the elasticity. This ‘optical illusion’ may also explain why the recent weakness of trade has been such a surprise.

These findings allow us to assess the role of cyclical and structural factors. Figure 2a shows that, with respect to its historical average of 1.5 (during our sample period), income elasticity has been reduced to 0.7 in 2015 with a similar contribution of structural and cyclical factors. But given that lower-than-expected GDP growth has also contributed a third of the forecast error, this back-of-the-envelope calculation suggests that cyclical forces have caused about two thirds of the forecast error – a result in line with the IMF’s estimate (Aslam et al. 2017).

Figure 2a also shows the trend component of the income elasticity stabilising at 1, which should remain similar until new impetus comes from further trade liberalisations or technological progress in transportation. Nevertheless, the exceptional weakness of global trade observed since 2011, which has gradually driven the income elasticity below 1, is also the result of poor business conditions. Therefore, one should expect that, as real GDP growth returns to trend, global trade growth recovers more strongly, with the income elasticity first returning to 1 and then exceeding this value once real GDP moves above its own trend growth.

Our analysis speculates about the medium- to long-term future of global trade. What about the short term? Can we exploit data on business conditions to improve trade forecasts? We examined these questions by focusing on the forecasts of world import growth produced by the IMF – the most commonly used in the business community and among policymakers. 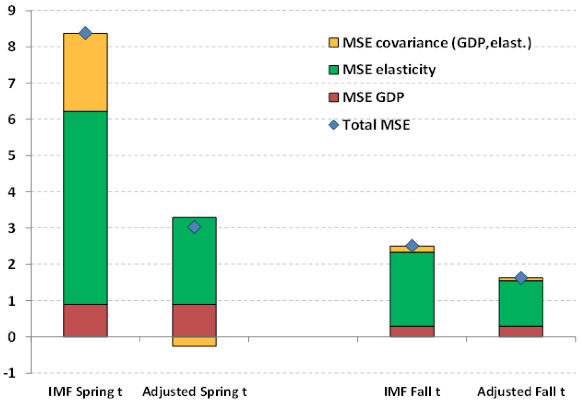 Source: Author calculations based on IMF data.
Notes: Total mean squared forecast error on world import growth in year t and its components, for the predictions made by the IMF in the spring and autumn of year t and for the corresponding cyclically adjusted predictions.

Our analysis identifies the structural and cyclical components that drive the behaviour of the income elasticity of trade. Since the mid-1990s, the structural component has been gradually declining towards its equilibrium level of 1. This result suggests that the income elasticity will probably not get close to the values of 2 or more recorded in the early 1990s unless international trade receives new impetus from international integration or technological advances in transportation. It could fall below 1 if, instead, trade liberalisation reversed.

At the same time, however, the analysis stresses the role of cyclical factors in the slowdown of trade in the current phase. One should then expect that, as real GDP growth returned to trend, global trade growth would recover more strongly, with the income elasticity first approaching, and then exceeding, 1 when real GDP growth moves above trend.