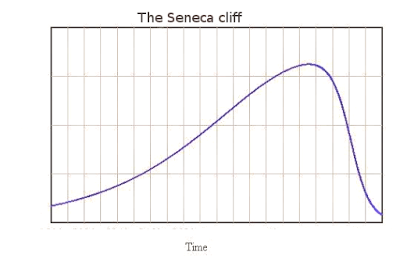 The “Seneca Cliff” is the point at which a system that grew large slowly, starts to collapse rapidly. This is the way the 1929 stock market and 2008 banking assets collapsed (image source). Any complex system can go over the Seneca Cliff, says climate scientist Ugo Bardi. (Can you guess why he’s studying it?)

I won’t belabor this here, since I have a longer piece in draft that makes the same point much more directly. But the basic idea is this: Climate people — activists, scientists, concerned citizens, “woke” politicians — think that the elite drive to march human civilization over the climate cliff is, to put it frankly, “nuts.” Irrational. Or “insufficiently self-interested,” to put it much too mildly.

I’ve begun to think differently though. I’ve begun to think that elites who are driving us over the cliff are not at all irrational. Someone who’s had that same thought as well is climate scientist Ugo Bardi, who offers a lay person’s view of much of his current work at The Seneca Effect.

Bardi’s goal is to study, in his words, “why complex systems fail,” and further, why they often fail rapidly. For more about Bardi’s work on rapid system collapse, see “The Seneca Effect: Why decline is faster than growth.” It explains phenomena like those detailed here — as well as what might soon happen to Uber (see “Can Uber Ever Deliver? Part Ten: The Uber Death Watch Begins“). The Seneca Effect is named after the Roman philosopher Seneca, who wrote that “increases are of sluggish growth, but the way to ruin is rapid.”

The Maldive Islands and Climate Change

Now to my own point. In a recent post, Dr. Bardi looked at the Maldive Islands, one of the most seriously threatened inhabited places in the world when it comes to climate change. According to the IPCC, 75% of the Maldive Islands could be under water by 2100.

Yet here’s what the rulers of the Maldives plan to do — stimulate development: 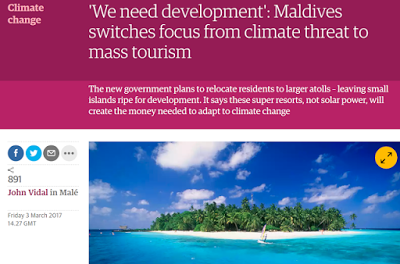 Is this an epidemics of brain disease? Or do the Gods really drive crazy those whom they want to destroy?

Maybe. But there is also a perfectly rational explanation for what’s happening. Imagine that you are part of the elite of the Maldives. And imagine that you are smart enough to understand what’s going on with the Earth’s climate. As things stand today, it is clear that it is too late to stop a burst of global warming that will push temperatures so high that nothing will save the Maldives islands. Maybe not next year but in a few decades, it is nearly certain.

So, given the situation, what is the rational thing for you to do? Of course, it is to sell what you can sell as long as you can find a sucker who will buy. Then you can say good riddance to those who remain.

In the case of the Maldives, Dr. Bardi concludes (emphasis mine): “What we are seeing, therefore, is a game in which someone will be left holding the short end of the dynamite stick. When the elites of the Maldives will have left for higher grounds, the poor will be stuck there. For them, the Seneca Cliff ends underwater.”

This is a developer’s dream — own something worthless, enhance it enough to sell at a much higher price, then leave. “Then you can say good riddance to those who remain.”

Can you guess where this logic leads us with respect to the planet? Not interstellar travel for the elites, but something else. If you still haven’t figured out what “then leave” means for them, stay tuned.