When flatworms go to space, they grow two heads ars technica. Chuck L: “What will happen when humans procreate in space?”

A Joke in Very Poor Taste London Review of Books. On May and Northern Ireland.

Schaeuble Says U.K. Welcome Back if Brexit Was Overturned Bloomberg

Labour is a government in waiting, Corbyn tells his MPs as he unveils autumn tour of the marginals he needs to win power Daily Mail. Note this is the top item in the UK news section once you get past celebrity gossip and the horrific White City fire, under the heading “May’s Election Disaster”.

Why Afghanistan? Fighting a War for the War System Itself Truthout

One-quarter of F-35 fighter jets grounded over oxygen issues Reuters. EM: “Because keeping pilots supplied with supplemental oxygen at altitude is a brand-new technical problem Lockheed had to solve from scratch! But I am confident gifting them a few more $Bln in governmental largesse will fix this. We can’t have The Exceptional Nation naked and undefended, can we?”

Fake news? Nobody beats the western media Vineyard of the Saker

Requests for Comments: Negotiating Objectives Regarding Modernization of North American Free Trade Agreement with Canada and Mexico Regulations.gov. From an e-mail blast by Lori Wallach of Public Citizen:

The USTR ticker currently shows more than 12,000 individuals comments accepted. That begs the question of what happened to tens of thousands of additional submissions…

We know Public Citizen members filed at least 11,000 individual comments directly to the docket. Groups from the Presbyterian Church to Sierra Club to Witness for Peace to several unions to Friends of the Earth and CTC counted more than 40,000 additional submissions.

Even the 12K that now register on the ticker represent a major break from the typical hundreds of industry comments and dozens of union/environmental/consumer group submissions that a USTR trade pact notice docket receives.

What Sessions did (and didn’t) tell us BBC

Trump Is Too Late to Bring Back Coal Bloomberg. Resilc: “WVa would be smart to load every topped off ridge with windmills and send a check to each resident.”

Elizabeth Warren Calls for Targeted Deregulation of Community Banks Wall Street Journal. Wowsers. Warren, who is fabulously data driven, has to know the calls for these breaks aren’t economically justified, as was confirmed by a reader whose comment we hoisted in a post yesterday. Key extract:

As a former DC lobbyist for a credit union trade association, I can verify that all the trades are getting behind Dodd-Frank repeal, even if it only marginally benefits their members. At this point, these decisions are far more political than practical. They went to get in good with the Republican majority and punch back at CFPB for keeping them accountable. And the compliance costs at this point are baked in. Just about all of the regulations emanating from DF are fully in effect and the compliance costs have already been imposed. Repealing these regulations wont save any money for institutions, since all their compliance systems are already in place. In fact, repealing regulations that are already in effect can actually cost banks, since they need to go back and make changes again.

So this must be a tactical concession while she tries to hold the ground on the CFPB.

The Clinton Global Initiative lives! “Blessed be the fruit!”

Anne-Marie Slaughter’s call for a “people-centered foreign policy” has been instrumental in broadening the field’s focus beyond the mainly traditional notions of security to one where security is more broadly formulated and operationalized. Specifically, it’s important for foreign policy experts and practitioners to not see women as passive agents of development.

It just gets worse. From the heart of the Clinton formulated and operationalized Blob.

What is “the Resistance,” Anyway? Black Agenda Report

Just another frat party’: Disgusted parents of Penn State pledge watch as students joke while teen’s death tape plays at hearing and then laugh and hug outside court as bereaved family looks on Daily Mail. Have to confess I went looking for DM’s gossip on Theresa May and found this as their lead story for US readers.

TPG’s Bonderman Resigns After Cracking Sexist Joke at Uber Meet Bloomberg. Wow, I never thought I’d use Bonderman, who really is a classic PE shark in a nice suit, as an example of confused new social standards. So let me get this straight…Uber and Silicon Valley generally have rampant sexism and sexual harassment which only gets dealt with in a serious way…just about never. But those guys are young bucks. An old white guy engaging in merely insensitive behavior (and signaling that getting female board members won’t change much, which IMSHO is correct) gets pushed out? Normally a super abject apology would do. Retrograde behavior is more acceptable when perpetrated by the young, it seems. And who knows, Bonderman may have wanted off the board (not just because he’s enough of a dinosaur to have trouble with enforcing modern gender norms but perhaps also that he recognizes Uber is a garbage barge) and unconsciously engineered his exit.

Uber Embraces Major Reforms as Travis Kalanick, the C.E.O., Steps Away New York Times. Talk is cheap. I’ll believe it when I see it.

“For the Many, Not the Few:” Labour Party Gains in Britain Highlight Political Viability of Socialism Counterpunch

Antidote du jour. From Timotheus: “Devin Russel of Oro Valley, Arizona, via The Naturalist’s Notebook: ‘The bobcat stayed on my concrete block wall for about 15 seconds, just long enough to capture this photo.'” 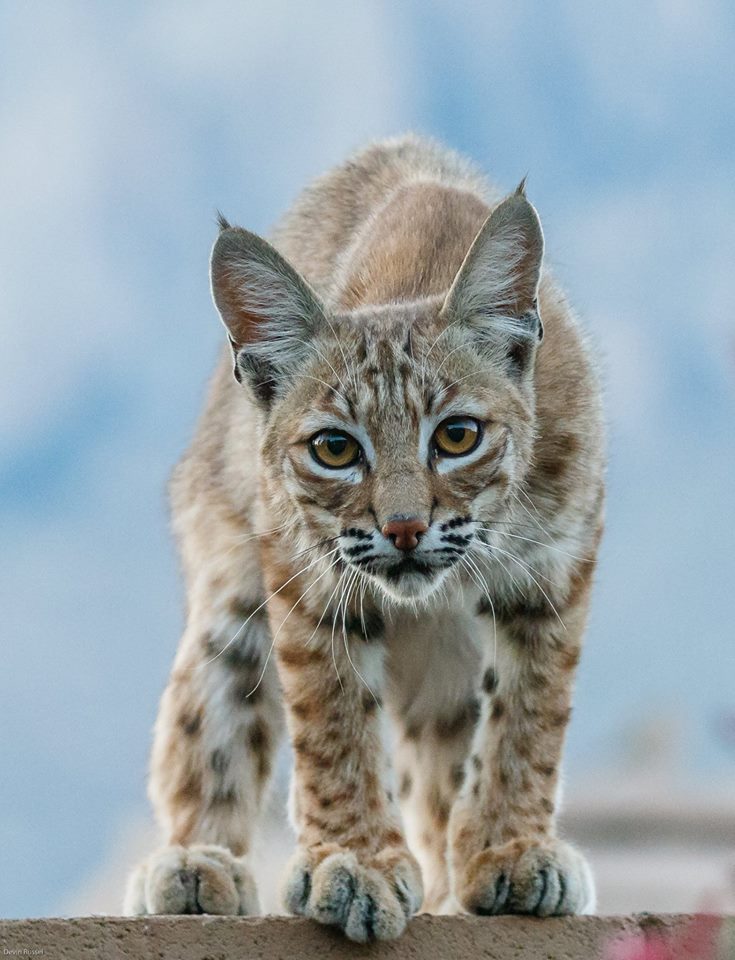