By Jemimah Steinfeld, deputy editor of Index on Censorship magazine. This article appeared in the summer issue of the magazine. Click here for more information on Index. Cross posted from Open Democracy

People see propaganda as a modern problem – manipulation by mass media. But the story is far older, and the tactics are timeless. While the game has moved on, the rules remain the same.

The EU’s police agency, Europol, recently revealed evidence that Isis is creating its own social media platform for the purpose of disseminating propaganda. It may be connected to Facebook and Google ramping up efforts to curb extremist material and “fake news”. In May, according to Reuters, Europol director Rob Wainwright said it showed “some members of Daesh, at least, continue to innovate in this space”. But while technological innovation might still be possible, will there be anything original on this new platform?

Until the reign of Augustus, no one in Rome had come close to creating a personality cult.

A striking image, a catchy phrase, shocking material – these are the bread and butter of propaganda. It turns out these tactics stretch right the way back through history. From etchings in caves to the Bayeux Tapestry, pushing out messages that seek to persuade and influence – the basic definition of propaganda – is as old as mankind. There was one figure, though, who really cracked it.

“Augustus is probably the supreme master of the art of propaganda in the entire history of the West. No one has rivalled him and everyone has since been in his shadow,” said historian Tom Holland, author of bestselling books on Rome, in an interview with Index on Censorship magazine.

Until the reign of Augustus, no one in Rome had come close to creating a personality cult. Rome was built on the idea that it was a republic and that no single man should dominate all others. When Caesar’s vanity led to his face appearing on coins, his demise quickly followed. Augustus, coming straight after Caesar, used hindsight to his advantage. He cast himself as essentially a normal person, even adopting the title princeps (first citizen), and would partake in entertainment with the masses, like racing, boxing and watching gladiators. But he also positioned himself as exceptional, using the title divi filius (son of the god), and his portraits echoed those of Apollo. Augustus’s face was everywhere, from statues, friezes and coins to writings and poems, and most famously in his appearance in Virgil’s Aeneid.

“He promotes himself with absolute genius,” Holland said. “He is simultaneously a figure who is an everyday guy and a figure of supernatural potency… he appeals to every aspect.”

Augustus perfected propaganda and his influence can be seen clearly in Napoleon, Mussolini and Hitler. The careful crafting of Mao’s image – clad in a simple “Mao suit”, with sunbeams resonating off his body – was straight out of the Roman ruler’s playbook. 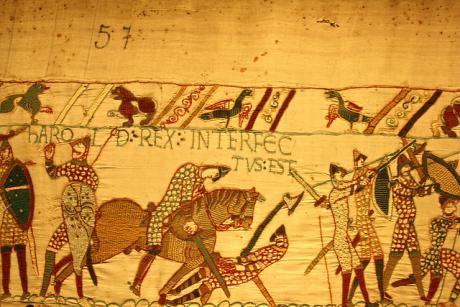 The Bayeux tapestry: the death of King Harold of England at the Battle of Hastings, 1066. Trevor Huxham/Flickr. Some rights reserved.

So Augustus provided the template, but technological change has undoubtedly improved the means. The birth of the modern printing press was a godsend for propaganda. It was during World War I, when there was a need to recruit, that Wellington House in London established a secret propaganda bureau, and from this the political poster was born. Driven by similar motives, President Woodrow Wilson in the USA formed the Committee of Public Information, which produced posters, films and other material that sought to champion home security and democracy against a foreign enemy. The committee attempted to convince millions of people that they should support the war, and those that still rallied against it, such as socialist publications, were silenced in the process.

The demands of the Russian Revolution quickly gave birth to a whole new genre, socialist realism or constructivism (“production art”), in which smiling peasants and strident factory workers were portrayed in bold colours and geometric shapes, pithy slogans slapped on top. Anatoly Lunacharsky, who was in charge of the People’s Commissariat for Education shortly after the Bolsheviks took charge, believed that by depicting the perfect Soviet man, art could create perfect Soviets.

Propaganda did not work just on what was shown; it worked also on what was omitted. Stalin was a master of this. Long before the advent of Photoshop, technicians in Russia manipulated photos so much that they became outright lies. David King, in The Commissar Vanishes: The Falsification of Photographs and Art in Stalin’s Russia, wrote that during the Great Purges, in the 1930s, “a new form of falsification emerged. The physical eradication of Stalin’s political opponents at the hands of the secret police was swiftly followed by their obliteration from all forms of pictorial existence”. The book highlights classic cases of “now you see me, now you don’t”. It includes a series of images featuring the same backdrops but with rotating casts, depending on who was or wasn’t in favour at the time.

“At the heart of authoritarian propaganda is the manipulating of reality. The authoritarian must undermine this,” said Yale philosophy professor Jason Stanley, author of How Propaganda Works, in an interview with Index.

The birth of mass media meant that propaganda didn’t need to confine itself to unmoving imagery. Instead, people’s minds could be influenced in a far more interactive way. Lenin called the radio “a newspaper without paper… and without boundaries” and used it to promote the Bolshevik message. And the revolution was televised, first at the cinema and then on TV. Sergei Eisenstein’s most famous films – October, Battleship Potemkin and Alexander Nevsky – were huge successes precisely because they fused technical brilliance with politically correct storylines.

The myriad possibilities of propaganda were not lost on Hitler, either. He devoted two chapters of Mein Kampf to it and, once in power, recruited a minister of propaganda, Joseph Goebbels, who declared that with enough repetition and understanding of the human psyche, people could be convinced that a square was a circle.

Propaganda once again changed with the advent of the internet as information, or misinformation, could be spread with a simple click. Yet even though the game has moved on, the rules remain the same. Whether it’s a fabricated blog post, a viral video of North Korea bombing Washington or tirades of tweets telling everyone you’re going to Make America Great Again, these are all timeless tactics repackaged for the modern day.

“Everything you read in the newspapers, it’s age-old,” said Stanley, who added that “tech people” see this as a modern problem that they can solve. People are misinformed about the past, he said.

Misinformed, yes, but also manipulated by people and industries that can look to history’s masterminds for best practice when it comes to propaganda.