President Trump, in his inaugural address and elsewhere, rightly says that over the decades since 1980 American household distributions of income and wealth became strikingly unequal. But if recent budget and legislative proposals from Trump and the House of Representatives come into effect, today’s distributional mess would become visibly worse.

First, I will sketch how the mess happened, then I will propose some ideas about how it might be cleaned up. I will show that even with lucky institutional changes and good policy, it would take several more decades to undo the “American carnage” that the president described.

How We Got Into Today’s Distributional Mess

In an INET-sponsored project at the New School for Social Research, we drew on standard government sources to rescale data on income and wealth distributions to be consistent with national income and financial accounts.1 Rescaling allows consistent macro level analysis of distributional shifts. We put together a demand-driven economic growth model to assess possible impacts of Trump-style policies and egalitarian alternatives.

Income and wealth distributions are multi-dimensional, but in the last few decades American experience can be understood in terms of a three-way breakdown of households – the rich represented by the top one percent in the size distribution of income, the bottom sixty percent, and the “middle class” in between. Over time some households will of course cross the income-level boundaries separating these bins, but such micro level detail is ignored in this and many other discussions.

Although they enjoy substantial labor payments, the top one percent households mainly rely on property income. Members of the middle class get 80% of their income from compensation for employment and government transfers. Over recent decades, households in the bottom group received 40% to 50% of their income from employment and 30% to 40% from transfers. The transfer share rose over time.

José Gabriel Palma of the University of Cambridge introduced an illuminating metric for disparity between a top income group and remaining households. Figure 1 shows “Palma ratios” of mean (average) disposable household income of the upper one percent to the means of the lower two groups. Thirty years of unequal economic growth generated the very high ratios at the end of the period. Growth rates of the Palmas were three percent per year – an astonishingly high number for any macroeconomic ratio over such a stretch of time.

Figure 1: Palma ratios based on disposable income per household (DYh) 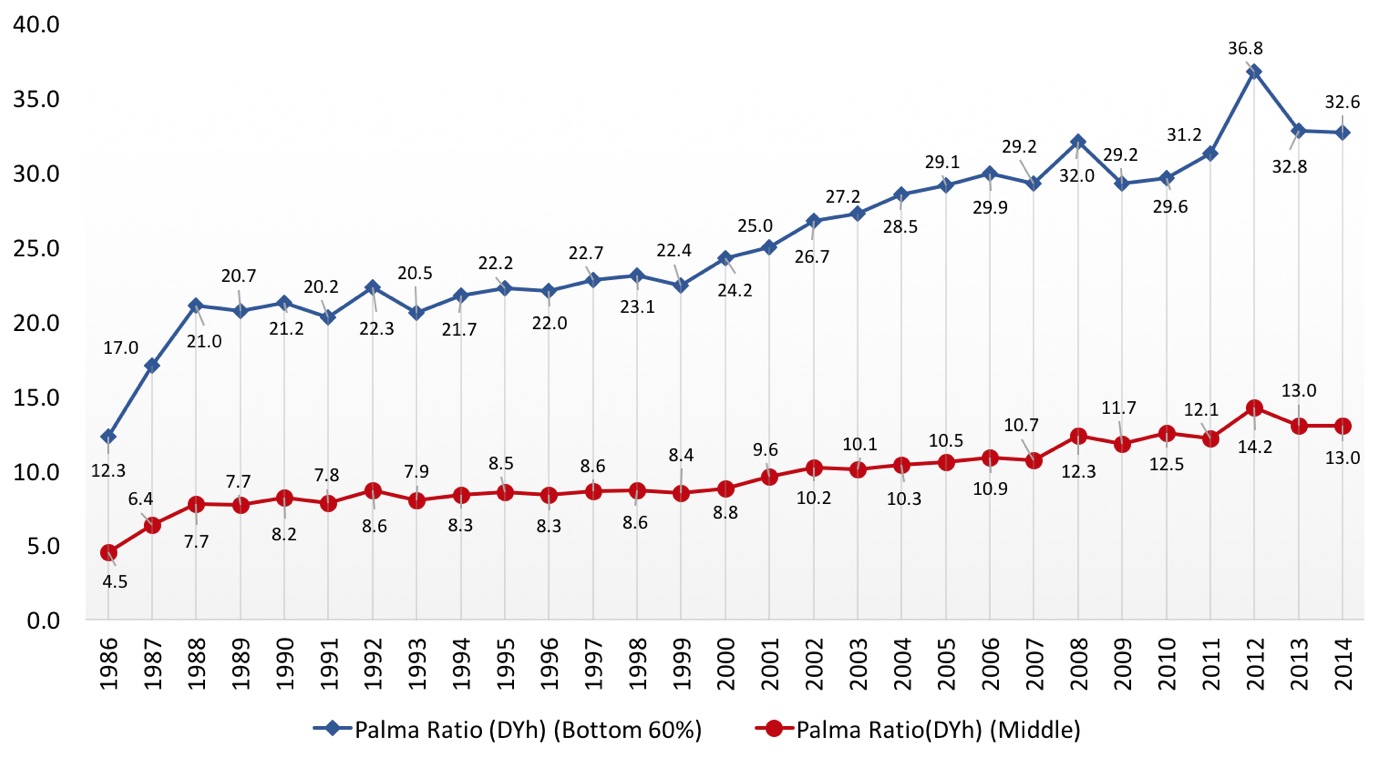 To borrow a metaphor from ecology, rich households are the top predators of the economic system, shaping prospects for all participants in the income chain below. Before getting into policy comparisons it makes sense to look closely at the top.

Figure 2 shows how the one percent’s income rose over time – late in the period the average was more than $2 million per year. Their total pre-tax income in 2014 was $2.7 trillion. GDP was $17.4 trillion so the upper group took in 15.7% of output; Including capital gains (which don’t enter the national accounts because they are not a cost of production to firms), they got close to three trillion.2

Figure 2: Sources of income for the top one percent

The bottom segments of the bars show that rich households received substantial labor compensation including bonuses and stock options which have exploded in the recent period.3 The top one percent’s labor earnings in Figure 2 grew at 6.5% per year!

Nevertheless, most of their money came from control of capital.4 Their “proprietors’ incomes” along with rents and depreciation exceeded labor income. Interest and dividend flows supported by corporate profits (the GDP share rose by more than five percentage points) were the same as or greater than earnings from employment. Finally, capital gains on equity and real estate usually ranged in the hundreds of thousands per household per year. Non-wage income per wealthy household roughly doubled between 1986 and 2014, with a growth rate close to three percent per year, much faster than the growth of output.

A final striking feature of Figure 2 is that apart from miniscule transfers, all forms of income received by rich households grew steadily over time. The steep slopes of the Palma ratios in Figure 1 were supported by diverse payments which increased reliably. Reversing all these trends will not be easy.

Figure 3 summarizes uses of income by the top one percent.  In the overall picture, their interest payments and contributions for social support programs are minimal. The major outflows are for consumption, saving, and direct taxes. Taxes and saving are both around 20-25% of income.

Figure 3: Uses of income by the top one percent

Saving of the top one percent is on the order of a trillion dollars per year. Their capital gains (formally recorded by the Federal Reserve) range a bit below half that level. After depreciation, high savings and capital gains flow into rich households’ net worth. Their share in total wealth was around 50% just prior to the Great Depression, then fell to 25% in the 1960s. By 1980, the New Deal’s progressive taxes had been defanged and a stagnant stock market began a long upswing, boosting the share to 40%.5 The top enjoyed rising net worth while the rest of the population got left behind.

How Trump-Style Policies Will Deepen the “American carnage”

How would a Trump program along the lines of his and the House’s proposals affect rich households? The obvious answer is “very favorably.” Because capital and wealth change slowly over time, some sort of economic growth model is needed to provide numbers. The one we used has four key characteristics.

We examine how variables shift from balanced growth in various scenarios. Current discussion involves policy changes in a range of one trillion dollars over ten years. With US aggregate demand (household and government consumption of goods and services, investment, and exports) approaching twenty trillion dollars, one hundred billion per year is not going to perturb the system very much. Larger changes have to involve cumulative effects over the years.

The impact of the first two moves would be to reduce aggregate demand, with the effect magnified by the fact that (at least according to available data) lower income households spend more income than they receive. Even though they have strongly positive saving, more income for the top one percent would boost their consumption.

Figure 4 shows how these interventions might play out over 40 years in comparison to the benchmark run, which shows a slowly rising GDP growth rate (panels a and b). Balanced growth Palma ratios are stable (panels c and d). Wealth becomes more concentrated (panels e and f). The top percentile’s benchmark wealth share rises above 50% — back to the Roaring Twenties a century later! 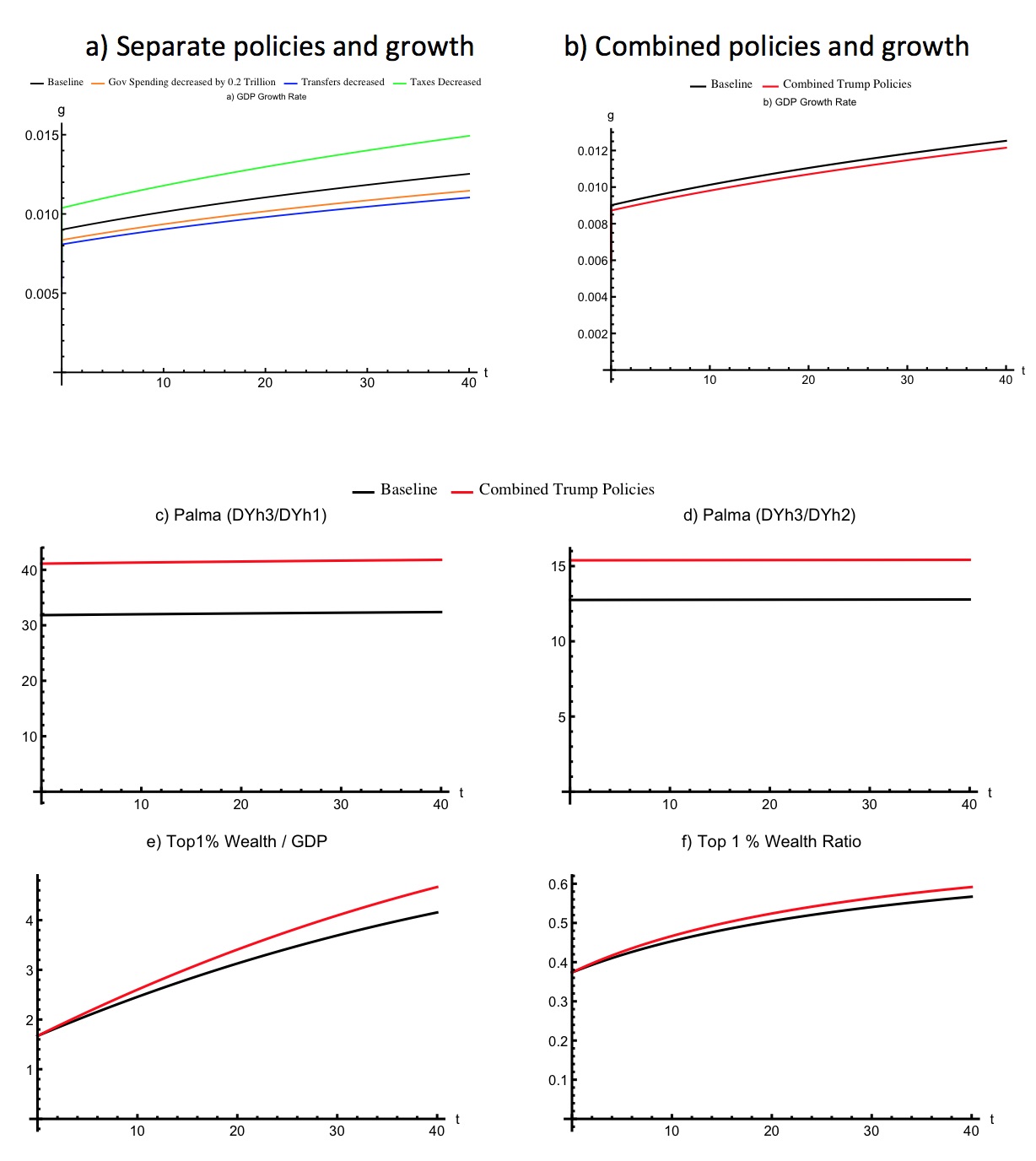 Trump-style policies would add insult to grave prior injury. Because they are in the hundred billion dollar range the effects on growth are visible but not huge (faster growth from the tax cuts, slower from the other two changes). The top households are strongly favored so Palmas jump and wealth becomes even more concentrated.

What About Prospects for a Progressive Alternative?

One-off progressive distributional initiatives have effects of similar magnitude but opposite sign. A ten percent wage increase for the bottom sixty percent of households, for example, would reduce the relevant Palma by a few points.8 To create large income and wealth changes over time as in Figure 1, cumulative distributional movements would be essential. Suppose, for example, that institutional changes deliver three key results.

Real wage growth is 1.75% per year for the bottom two household groups with zero growth for the top one percent. Shifting economic power from business toward labor would be essential to make these changes happen.

There is a one percent annual decrease in the coefficient tying rich proprietors’ incomes to output. Tax reform would be needed to assure this result.

Similarly, there is a one percent annual decrease in the coefficient relating financial transfers to the upper one percent to profits, i.e. firms invest more and distribute less.

These numbers are arbitrary, but illustrative. Over 40 years, such changes would reduce disposable income Palmas by about 50%, more or less reversing the trends in Figure 1. Their effect on wealth, however, would be minimal.

Owners of wealth maintain their positions because their large stocks of assets generate big capital gains along with interest and dividend payments from which their saving rate is high. A public wealth fund could become an alternative vehicle for accumulation. Perhaps the best-known proposal is still the one put forward 65 years ago by the Swedish trade union economists Gösta Rehn and Rudolf Meidner, who wanted to extract money from firms to support workers’ pensions .9 An American version might be financed by a 50% tax on capital gains. It could transfer two percent of its assets each year to households with low incomes. The transfer would mimic a guaranteed minimum income, subject over time to asset price fluctuations.

Figure 5 shows how the institutional changes mentioned above combined with a wealth fund affect the economy over time. Palma ratios steadily shift downward.  With its high saving rate, an aggressive public fund could make a real dent in the concentration of wealth. 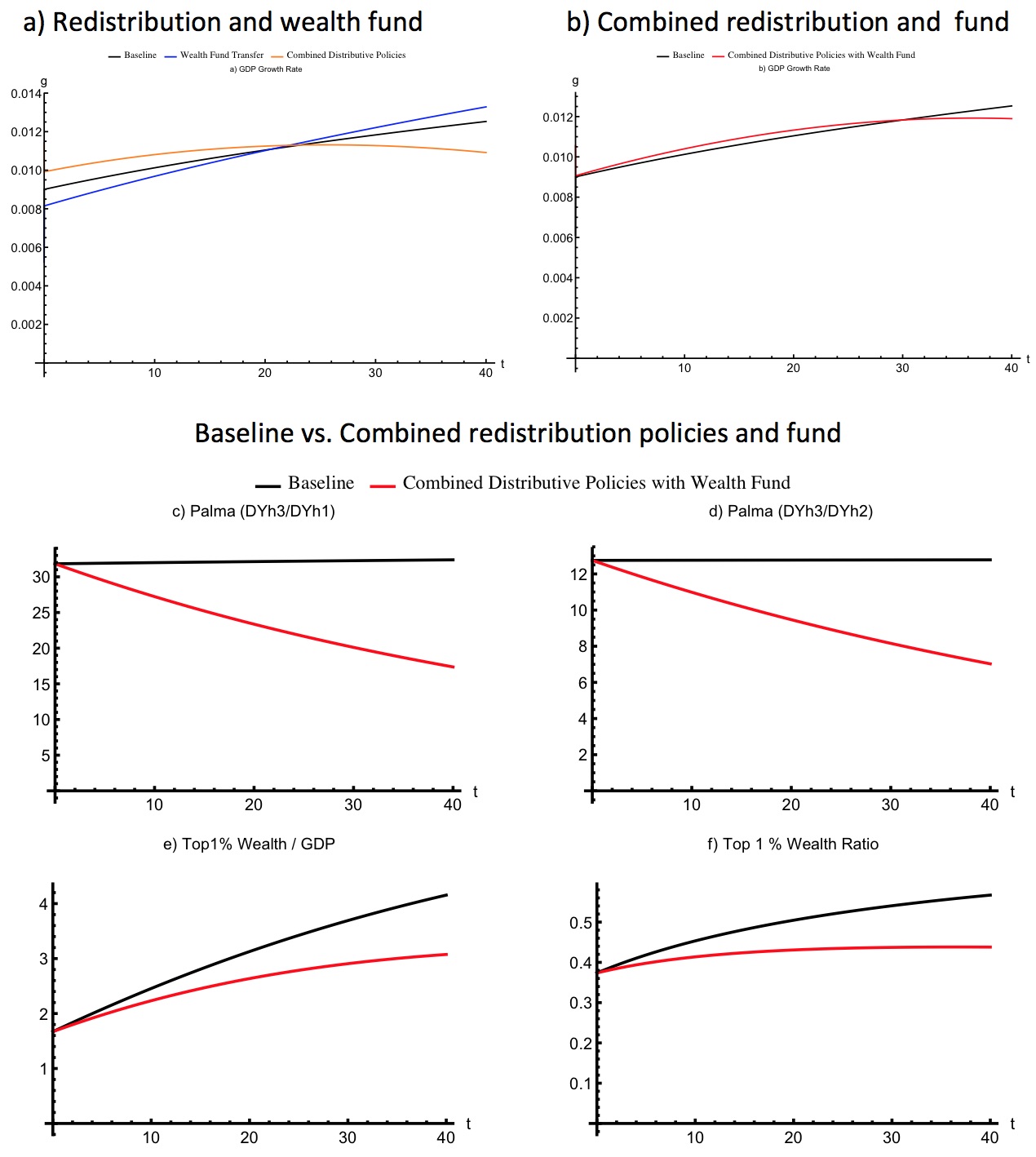 It is by no means obvious that all these progressive changes could come into place. If not, and if Trump-style interventions materialize, the distributional mess will only get worse.

Trump’s and the Congress’s budget and legislative proposals could only work for his “struggling families” and “forgotten people” if they would generate strong trickle-down growth.  Structural constraints on income distribution and wealth dynamics won’t let trickle-down happen.  His slogan about “America First” is for the top one percent of income distribution – effectively a “capitalist” class – not for “workers” in the middle of the income distribution or the struggling, forgotten households further down.

I have outlined a feasible progressive alternative, which would generate broad-based progress.  Progressive changes may not take hold. If not, and if Trump-style interventions materialize, the distributional mess and “American carnage” will only get worse.

* Support from INET, comments by Thomas Ferguson and Servaas Storm, and super RA help from Özlem Ömer are gratefully acknowledged.