Between 1978 and 2015, China moved from a poor, underdeveloped country to the world’s leading emerging economy. Despite the decline in its share of world population, China’s share of world GDP increased from less than 3% in 1978 to about 20% by 2015 (Figure 1). According to official statistics, real national income per adult grew more than eightfold between 1978 and 2015. While the average national income per adult was approximately €120 per month in 1978 (expressed in 2015 euros), it exceeded €1,000 per month in 2015 (Figure 2).1 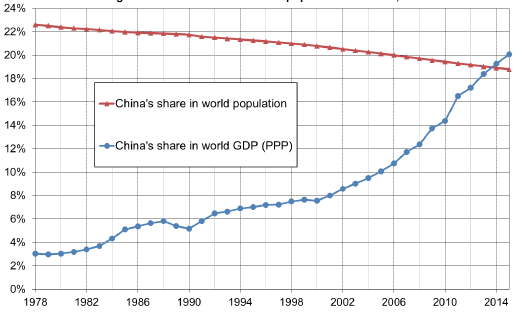 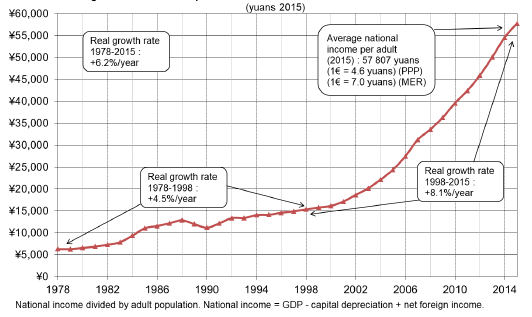 However, relatively little is known about how the distribution of income and wealth within China changed over this critical period. That is, we do not have consistent estimates of the extent to which the different income and wealth groups have benefited (or not) from the enormous macroeconomic growth. The household surveys that are used to study distributional issues in China (e.g. Piketty and Qian 2009) suffer from massive under-reporting, particularly at the top of the distribution, and are typically not consistent with the data sources that are used to measure macro growth (namely, national accounts). This is an issue of tremendous importance not only for China and its future development path, but also for the rest of the world and the social sustainability of globalisation.

In the current research, we combine official and non-official sources (including independent estimates of China’s balance sheets)2 to provide the first systematic estimates of the level and structure of China’s national wealth since the beginning of the market reform process. We find that the national wealth-income ratio increased from 350% in 1978 to 700% in 2015. This increase was mainly driven by the increase of private wealth, which increased from 115% to 487% of national income during the same period (Figure 3). 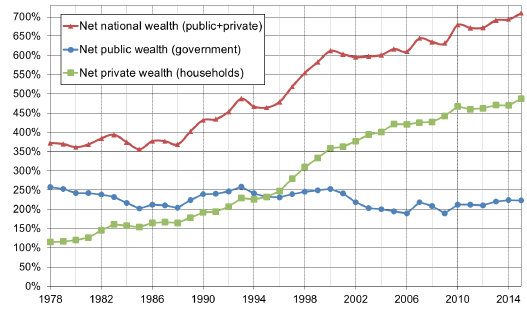 The share of public property in national wealth declined from about 70% in 1978 to about 30% in 2015. More than 95% of the housing stock is now owned by private households, as compared to about 50% in 1978. Chinese corporations, however, are still predominantly publicly owned: close to 60% of Chinese equities belong to the government (with a small but significant rebound since 2009), 30% to private Chinese owners, and 10% to foreigners – less than in the US, and much less than in Europe (Figure 4). 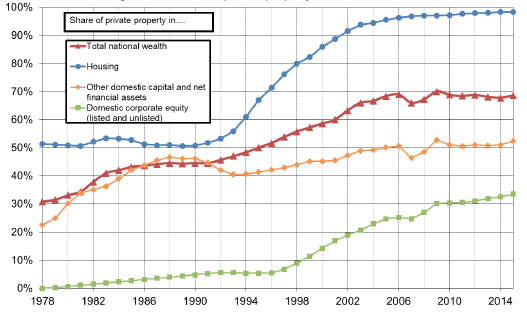 In brief: China moved a long way toward private property between 1978 and 2015, but its property regime is still markedly different than in other parts of the world. China has ceased to be communist, but is not entirely capitalist; it should rather be viewed as a mixed economy with a strong public ownership component. In effect, the share of public property in China today (30%) is higher than in the West during the mixed economy regime of the post-WW2 decades (around 15%-25%), but not hugely so. And while the share of public property in national wealth has declined to 0%, or even less than 0%, in Western countries (with public debt exceeding public assets in the US, UK, Japan, and Italy today), the public’s share of national wealth in China seems to have strengthened since the 2008 financial crisis. These findings are not completely unexpected, but we feel that it is important to be able to put numbers on these evolutions.

By combining recently released tax statistics on high-income individuals with household surveys and national account data, we can provide new estimates of income inequality (Piketty et al. 2017). To our knowledge, this represents the first attempt to use tax data on high earners to correct inequality statistics in China.3 An income tax has been in place in China since 1980, but until recently no detailed income tax data were available, and scholars therefore had to rely on household surveys based upon self-reported information. In 2006, the Chinese tax administration began to release data on the numbers of high-income individuals (i.e. with individual taxable income above RMB120 000 per annum, equivalent to €11,988) and their incomes.

We should make it clear that these data are highly imperfect; our revised estimates might well under-estimate inequality and our top income shares should be viewed as lower bounds. What is interesting, however, is that even these lower bounds are already a lot larger than official survey-based estimates. For recent years, we find the income share of the top 10% to be around 41% of total national income (as opposed to the 31% suggested by surveys), and the income share of the top 1% to be approximately 14% of national income (as opposed to 7% suggested by surveys). According to our series, the share of national income going to the top 10% rose from 27% to 41% between 1978 and 2015, while the share for the bottom 50% fell from 27% to 15%. The urban-rural income gap increased, but income concentration also rose significantly within both urban and rural China (Figure 5). 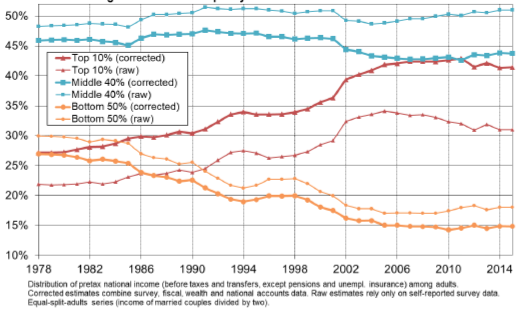 Figure 6a Bottom 50% versus top 1% income share: China versus US 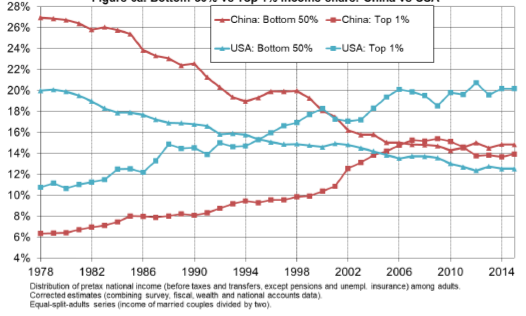 Figure 6b Bottom 50% versus top 1% income share: China versus France 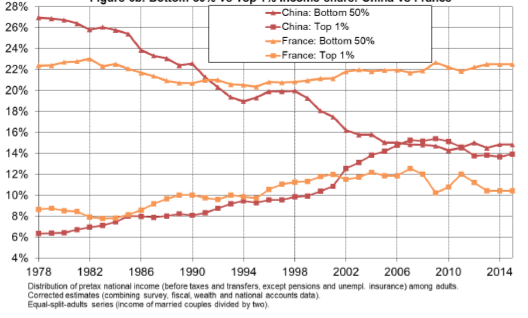 Comparing the average annual growth rate of real per adult pre-tax national income for different income groups in China, the US and France from 1978-2015 (as shown in Figure 7), the top 1% of the income distribution experienced a growth rate of 8.4% in China, 3.0% in the US, and 1.4% in France. However, the average annual growth rates for the bottom 50% in China and the US are significantly lower at 4.5% and 0%, respectively, while the same figure was 0.9% in France. For the time being, China’s development model appears to be more egalitarian than that of the US, but less so than those in European countries.

Figure 7 Rising inequality and income growth: China versus others 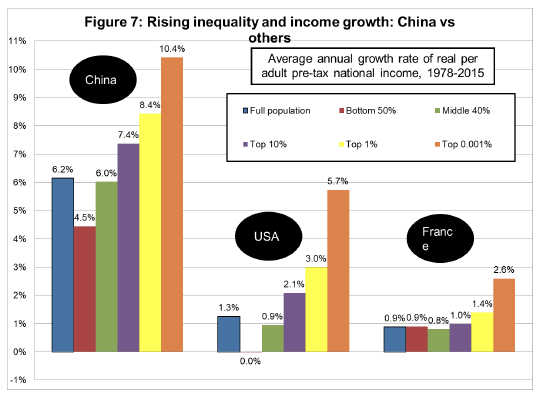 Although our new series on income and wealth in China are more homogenous and comparable than previous attempts, we stress that they still have the potential to be improved as new data sources become available and better methods are designed.4 All the series presented in this column are available online on the World Wealth and Income Database (WID.world); updated series will be posted there. Our paper is part of a broader international project aimed at producing Distributional National Accounts, which combine national accounts, survey, and tax data in a systematic manner to produce inequality estimates that are homogenous and comparable across countries.5

[4] Hong Kong and Macao are excluded from our data—both from the national accounts and from the household surveys, income tax returns, and wealth rankings. This could lead us to underestimate the rise of inequality, and this should be taken into account in future research.

[5] Piketty, Saez and Zucman (2016) construct distributional national accounts for the United States, and Garbinti, Goupille and Piketty (2016, 2017) for France. These and the present Chinese series all follow the same guidelines (see Alvaredo et al., 2016). New and updated series will be regularly made available on-line on the World Wealth and Income Database (WID.world).