Please give a round of applause to Lambert, Jerri-Lynn, and Outis who sorted out, within hours of my telling them I couldn’t read or post as a result of an eye injury incurred in Los Angeles (which led to emergency room visits in LA and San Francisco, ugh) how to divvy up the work I was supposed to do over the next few days, and then early this week, to keep you all fed with your daily ration of information, analysis, and animal pictures.

While I did get my Los Angeles and San Francisco meetups done, and I think the readers enjoyed each of them a great deal, the rest of the trip was a bit of a bust. I felt particularly bad about the dinner meeting I had right after the LA meetup, in which I quickly got into so much distress (scratched cornea, and trust me, they are incredibly painful and I have a very high pain threshold) that I had to bail out when the appetizers arrived. One of my hosts (wife of an MD) took me to Cedars Sinai and stayed with me for 5 hours while (among other things) I saw 2 doctors and had my eye flushed out with a huge bag of saline solution. I also learned a lot about the state of eye technology (even when I am in bad shape, I always make the doctors explain what they are doing in quite a bit of detail).

The LA session wound up being a big group discussion of many current political topics, with a lot of the participants interested in further discussion and potentially some focused activism. The participants created a list for future communication and meetings. I know some readers were unable to come due to the date and location not fitting their calendars. If you would like to be included in the NC Los Angeles mailing list, please write me at yves-at-nakedcapitalism.com with “Los Angeles Group” in the headline, and I will forward your message to the organizer.

Watching Silicon Valley sweat over EU regulatory discipline is sexier than you might imagine. https://t.co/FbI7oSvOuY

Travelers’ electronics at US airports to get enhanced screening, TSA says ars technica

Did antidepressants help make this man a mass-murderer? BBC

Finishing course of antibiotics could harm you, doctors say The Times. Lordie. How many years have doctors been prescribing antibotics, and no one knows how long a “course” should be? Help me. Here is the underlying study: http://www.bmj.com/content/358/bmj.j3418

For China’s Global Ambitions, ‘Iran Is at the Center of Everything’ New York Times (Sid S)

Poland hits back at EU ‘blackmail’ over judicial reforms Guardian

Government orders study looking at the impact of ending free movement from the EU Sky News. Help me. this is being done only now?

EU workforce report ‘will arrive too late’ The Times. Duh.

Can Venezuela Resurrect Its Economy? Council on Foreign Relations

A Shameful Silence: Where is the Outrage Over the Slaughter of Civilians in Mosul? Defend Democracy

The Saudi Power Balance Is On A Knife-Edge OilPrice

Senior Israeli Minister Warns Palestinians of “Third Nakba” LobeLog. Resilc: “Our tax $ at work…maybe the Israelis can give them smallpox blankets? worked for us….

Commission succeeds in blunting US sanctions on Russia Politico

Trump and the Trumpists Wolfgang Streeck. A must read.

This SST post probably won’t go over well with much of the NC commentariate but it does reflect how experienced combat soldiers, and especially commanding officers, look on these things. Trump’s statement regarding transgender people follows logically from Mattis’s memo of last Friday as described in the following SST post yesterday:

Trump Is Selling Out the Midwest, Biofuel Industry Says Bloomberg. Resilc: “This and cutting Syria aid are MAJOR wins.”

Is Trump Ruining Book Sales? New Republic. The common cold will be his fault too.

I want to give you a quick update on what’s happening with the disastrous Republican efforts to strip health care away from 22 million people. Bernie Sanders, Facebook (Kevin C)

Clinton book to double down on Russia, Comey message The Hill. Let us not forget that her last book was mainly pulped…but we’ll be unable to avoid encountering headlines of reviews.

Four Lloyds Bank workers and three ‘bespoke money launderers’ who raided £750,000 from the accounts of rich clients and lavished it on luxury lifestyles are jailed for 38 years Daily Mail. Look at how the authorities pounce on people who steal from the wealthy! Too bad for the rest of you.

How work changed to make us all passionate quitters aeon (Chuck L). A must read. IMHO this is a big reason productivity isn’t growing. Turnover is a big cost to a business. And employees with their eye on the door won’t go that extra mile for their company. By contrast, Goldman has very low turnover and it is very adept at getting employees to invest psychologically in the firm.

Antidote du jour. Stephen who was at the SF meetup promised cat pics. This is Willow, who likes climbing in bed. 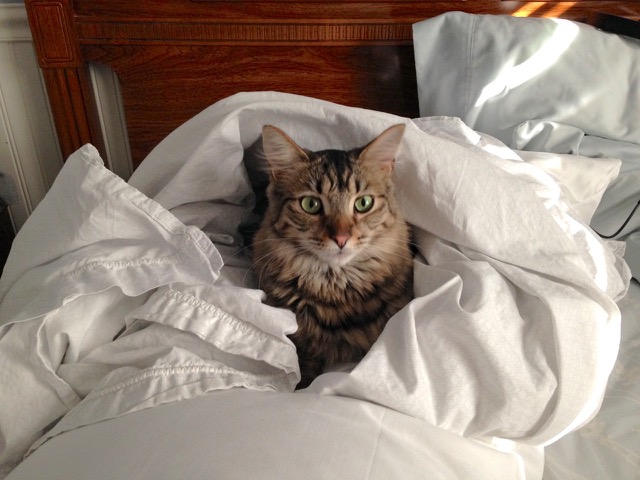 And Richard Smith and I loved this one but Lambert really didn’t: