By Steven Clifford, who served as CEO for King Broadcasting Company for five years and National Mobile Television for nine years. He has been a director of thirteen companies and has chaired the compensation committee for both public and private companies. Cross-posted from Alternet. Clifford’s complete book, The CEO Pay Machine: How It Trashes America and How to Stop It by Steven Clifford (Blue Rider Press, May 2017), from which this excerpt is drawn, is available from Amazon and IndieBound.

In the long term, the indirect effect of the Pay ­Machine—​the increase in income inequality—is economically more injurious than the erosion of company earnings or a stock market downturn.

Income inequality in America has risen sharply since 1976. Economists and pundits point to multiple causes—globalization and competition from low-wage​ countries; growing educational disparities that particularly affect men and minorities; technological changes that reward the highly skilled; decline of labor unions; changes in corporate culture that place stock price and earnings above employees; free market philosophy and the rise of winner-take-all economics; households with high-income couples; lower rates of marriage and of intact families; high incarceration levels; immigration of low­-skilled individuals; income tax and capital gains tax cuts and other conservative economic and tax policies; deregulation; and decreased welfare and antipoverty spending coupled with redistribution programs that disproportionately benefit the elderly.

As shown in the graph [that follows]… between 1980 and 2014 the average real income of the Mega Rich has nearly quadrupled, increasing by 381 percent. Over the same period, the Merely Rich doubled their income while the bottom 90 percent lost ground, suffering a 3 percent decline. 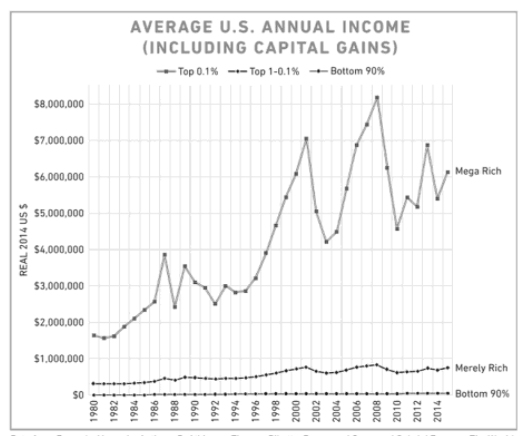 The Mega Rich captured most of the national income gains during the last four decades as their share of income increased from 3.4 percent in 1980 to 10.3 percent in 2014. The share of the Merely Rich rose from 6.6 percent to 11.0 percent over the same period. Thus the Mega Rich snared over ­three-fifths of the income growth of the 1 percent and nearly 40 percent of all income growth. In the tepid recovery from 2010 to 2012, the 1 percent took virtually all of the income gains. The Mega Rich again got the lion’s share: their average income increased 49 percent in this three-year period.

Since Fortune 500 CEOs can account for only 500 of the 115,000 Mega Rich, you might be surprised to learn that the majority of the Mega Rich are business executives. CEOs and other business executives constitute the largest ­high-income group in America. Not the old families with their inherited wealth. Not the sports heroes with their ­jaw-dropping​ contracts. Not the movie stars at $20 million per blockbuster movie. Executives, managers, supervisors, and financial professionals constitute three­-fifths of the top 0.1 percent. Moreover, they accounted for about 70 percent of the increase in income going to the top 0.1 percent from 1979 to 2005. As Nobel Prize­–winning economist Paul Krugman puts it, “Basically, the top 0.1 percent is the corporate suits, with a few token sports and film stars thrown in.”

In Capital in the Twenty-First Century, Thomas Piketty, after analyzing enormous amounts of data, wrote:

The vast majority (60 to 70%, depending on what definitions one chooses) of the top 0.1% of the income hierarchy in 2000­–2010 consists of top managers. By comparison, athletes, actors, and artists of all kinds make up less than 5% of this group. In this sense, the new US inequality has much more to do with the advent of “supermanagers” than with “superstars.”

Piketty asserts that increasing income inequality is caused not by investment income but by high wages driven by “the emergence of extremely high remunerations at the summit of the wage hierarchy, particularly among top managers of large firms.”

Furthermore, “CEOs use their own power not only to increase their own salaries, but also those of their subordinates,” one study determined. As a result, the majority of “supermanagers” are either CEOs or executives whose compensation is heavily influenced by their pay—private company CEOs, other senior corporate executives, and the professionals who advise them. There are more than 5,000 publicly traded companies and 5.7 million private companies with employees.

The graph… [that follows] shows that the annual income of the Mega Rich and the ratio of CEO to average worker pay are highly correlated—the two lines look almost identical. While correlation does not prove causation, I find it easier to believe that runaway CEO pay caused the income of the Mega Rich to skyrocket rather than the other way around. 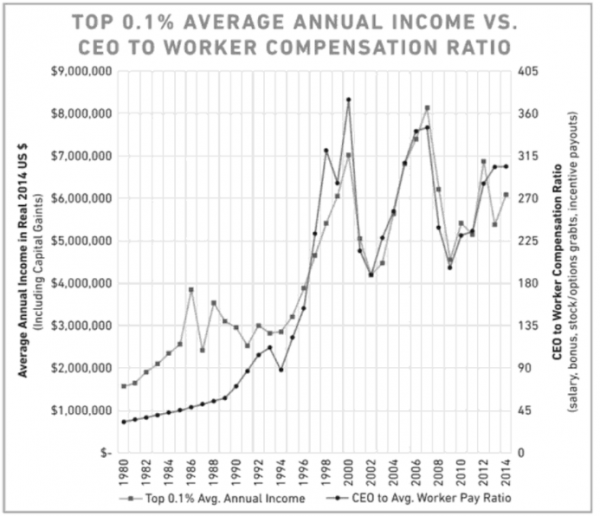 Keep this graph in mind as we analyze how growing inequality curbs economic growth. Every time you see the phrase “increasing inequality” or “income inequality,” you could substitute “rising CEO pay.”

“There’s been class warfare going on for the last twenty years,” said Warren Buffett, “and my class has won.” Some celebrate this result in the belief that free markets have justly rewarded talent, hard work, and initiative. Others bemoan the division of America into the Mega Rich who pluck the fruits of economic growth and the 99 percent who stagnate.

I side with the bemoaners, but others have examined the moral and social reasons why income inequality is bad far better than I can. I will examine the economic damage. Americans may differ about politics, religion, and sports teams, but all applaud economic growth. They may argue how to best divide the pie, but they agree that a bigger pie beats a smaller one and that economic growth is preferable to its alternative­—a recession. Whether increasing inequality helps or hurts the economy is the wrong question. The right question (and an easier one) is, “Given where America is today, will greater or lesser income inequality spur economic growth?”

From 1949 to 1979, while the ratio of CEO‑to‑average­-worker pay was relatively constant, the US economy grew 2.56 percent annually. When this ratio surged from 1981 to 2014, economic growth dropped to 1.71 percent a year. The difference may sound small, but over half a century, the higher growth rate results in an economy that is 50 percent larger. That’s a big difference.

This correlation doesn’t prove that income inequality slowed economic growth, but it suggests that overpaying CEOs has not done much to help. Economist Richard Freeman draws an inequality curve in the form of an inverted U as shown [below]… The vertical axis shows the level of inequality. The horizontal axis depicts total economic output or GDP. At Point A on the left, there is perfect equality; everyone gets the same amount of money regardless of talent and effort. Therefore, no one has a financial incentive to work and economic output is zero. From this point, increases in inequality are good for the economy, for a while. At some point, more inequality begins to stifle growth. At the right end of the curve, one person gets all the money, and again, no one has an incentive to work. At the top of this curve, between total equality and total inequality, economic output is maximized at Point I. 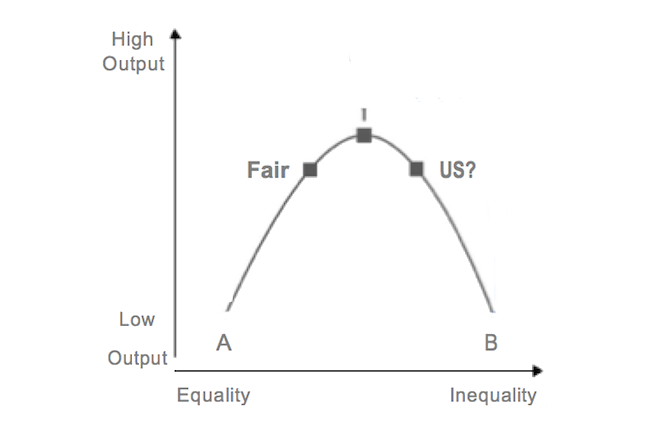 In a 2014 report, the ratings agency Standard & Poor’s says that current inequality levels are hindering US economic growth and the firm has cut its growth forecast. Its report states, “We’ve reduced our 10‑year U.S. growth forecast to a 2.5 percent rate. We expected 2.8 percent five years ago.”